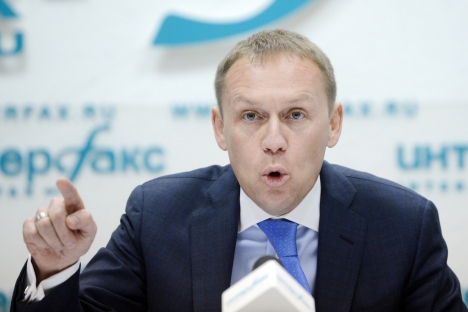 Former Soviet KGB agent and Andrei Lugovoi gestures while speaking at a press conference in Moscow, on March 12. Lugovoi is Britain's main suspect in the 2006 polonium poisoning in London of Kremlin critic Alexander Litvinenko. Source: AFP

The Russian Investigative Committee has suspended its inquiry into the death of ex-security service officer Alexander Litvinenko in London. Russia blames its decision on the British investigators accused of being reluctant to collaborate.

The Russian Investigative Committee has suspended its inquiry into the death of ex-security service officer Alexander Litvinenko in London, according to Former Soviet KGB agent and current Russian parliamentarian Andrei Lugovoi, who has been recognized as an affected party in this case and accused by the UK authorities of involvement in the poisoning of Litvinenko.

"This case has been suspended. We sent all the available materials to the Investigative Committee, which conducted all examinations and took different investigative measures," Lugovoi said at a press conference at the Interfax central Office on Tuesday.

All questions that Moscow forwarded to London as part of this investigation "were left unanswered," a source familiar with the situation told Interfax.

"However, the timeframe for these procedures is not limitless," he said.

Lugovoi stated that Russian investigators are taking active part in the Litvinenko death trial in London.

Russia wants truth to be established in the Litvinenko case

"The Investigative Committee is eager to continue its participation in the Coroners' inquest because, as far as I understand, they are quite curious about the contents of the materials available to the UK side," Lugovoi said. "As far as I know, they are actively participating in it, flying to London."

The Russian Investigative Committee said in mid-December that it was going to seek the UK authorities' permission to participate in a full inquest into the death of Litvinenko, who is thought to have been poisoned with polonium-210.

At the same time, Lugovoi, accused by the UK authorities of involvement in the poisoning of Litvinenko in London, has said that he will not take part in the Litvinenko death trial.

"I have come to the conclusion that the UK authorities will not give me any chance to prove that I am not guilty and I will be unable to get a fair trial in the United Kingdom," Lugovoi said at a press conference at the Interfax central office. "I have run out of hope to see a fair trial in the UK. I no longer believe in the very possibility of an impartial investigation of this case in the UK. I have to announce that I am quitting the Coroners' inquest. I will not take part in it."

Lugovoi said he wanted the trial to be open to the public. However, given the presence of several classified documents, court sessions where these documents will appear will be held behind closed doors.

"The chance of getting an in-depth unbiased inquiry is approaching zero. It is unclear how it is possible to protect oneself and prove wrong the arguments that no one is going to declassify. It is not clear who will assess the authenticity of these secret facts if neither I nor the public ever find them out, how one can play with open cards if the adversary, represented by the UK Foreign Office, is not going to show his cards. It is not difficult to guess who will lose and whose reputation will be smeared in the end," Lugovoi said.

Lugovoi argues that judging by his copy of the London police report dealing with Litvinenko's death, it was possible to conclude that "the polonium trail leads not from Moscow to London, but from London to Moscow."

In his opinion these documents "reveal the true goal of this case - the goal of accusing Russia of Litvinenko's death and state terrorism with the use radioactive materials."

"The motive in this case remains as far-fetched as it was five years ago. Investigators in London simply repeated the same scary tales about Russia that appeared in the UK press in 2007," Lugovoi said. "Litvinenko is not Trotsky. Litvinenko was not so important to make special services chase him with an ice-axe in their hands all over the world."

Lugovoi said that looking at the documents available to him, he concluded that investigators had analyzed just one theory linked to Litvinenko's death.

Former Federal Security Service officer Litvinenko, who fled to the UK in 2000, died in November 2006 soon after meeting his former colleagues Andrei Lugovoi, Dmitry Kovtun and Vyacheslav Sokolenko. Traces of the radioactive element polonium 210 were found in Litvinenko's body. The UK authorities accused Lugovoi of involvement in the incident and demanded his extradition, which was denied by Russia.

"Berezovsky is involved directly in this, I think," Lugovoi said at a press conference at Interfax on Tuesday.

During a press conference in Interfax on Tuesday Lugovoi stated that Berezovsky's role in Litvinenko's death can be seen from a report on Scotland Yard's inquiry.

"The report says that Berezovsky was a co-player in all events involving Litvinenko, because the motives behind the murder I was blamed for are linked to Berezovsky's nearest associates," Lugovoi also said.

Lugovoi also implied that Berezovsky had lied during his testimony at Scotland Yard.

"Berezovsky lies," he said. "It is a brazen lie. He did not mention the meeting we had on October 25. But he says, on the contrary, that I came to his office on October 31, when in fact I did not. He lies when he testifies."