Lifestyle
Igor Rozin
based on Interfax and Forbes 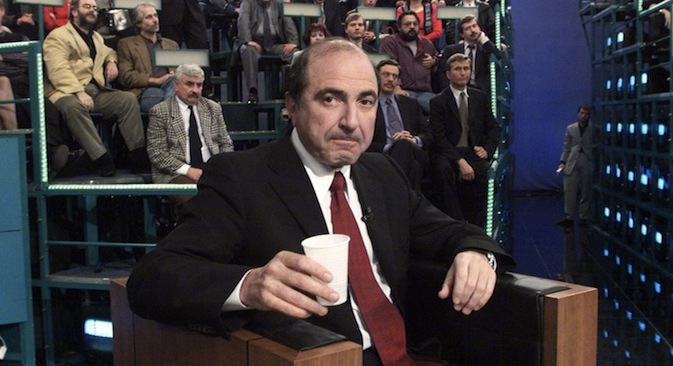 Vladimir Putin's press-secretary Dmitry Peskov describes Berezovsky as "a very significant figure in politics" who "played a very important role" which had been "shrinking" since the 2000s. Source: AP

Russian notorious oligarch Boris Berezovsky's relatives expressed confidence that his death was natural while some politicians related the businessman's death with his political defeat and financial failures.

After Russia's notorious oligarch Boris Berezovsky was found dead in his apartment in London, UK police launched investigation. The oligarch's relatives expressed confidence that his death was natural while former Moscow Mayor Yury Luzhkov, who knew Brezovsky well, related the businessman's death with his political defeat and financial failures.

Putin's spokesperson: Berezovsky wanted to return to Russia before death

The relatives of Russian businessman Boris Berezovsky, who died in the UK on Saturday, have still not decided on the possible place of his burial, but are confident that he died of natural causes, a source close to the businessman's family told Interfax on Sunday.

"We can now say with 100 percent certainty that the cause of death was natural," a source told Interfax, citing Berezovsky's relatives. "The place of his possible burial has not bee discussed yet. The family don't even know yet when the investigative actions will be completed, when the final death certificate will be issued, and when the body will be given to the relatives."

When asked whether the relatives will ask for Berezovsky to be buried in Russia, the source said: "I think there is little probability of that because many of Berezovsky's friends were unable to attend the funeral for various reasons. Although it would be great if Berezovsky was buried in Russia."

"I would not discuss this issue in the conditional mood. If such a request is made - let's wait for it to be made and how it will be made - a decision will probably be made in Moscow," Peskov said in an interview with the television channel Dozhd.

In contarst, Former Moscow Mayor Yury Luzhkov makes no bones about the issue of Berezovsky's burial.

"He probably had a will […] I think he, of course, should be buried on the territory of our country," he said in an interview with Dozhd television.

Speaking about Berezovsky's death, Luzhkov assumed that the businessman was depressed due to his political defeat and financial failures.

"I think it's a result of his previous activities, it's a result of depression, which was most likely caused by two reasons," the former Moscow mayor speculates. "The first reason is his full political failure and the second is his financial defeat in the London court, where he lost a lawsuit against Abramovich."

"These two circumstances probably led to such a result," he concluded. "It's the final of his personal catastrophe."

The businessman's son-in-law Yegor Shuppe reported on Berezovsky's death on Facebook on Saturday.

Berezovsky immigrated to the UK in 2000. In Russia, the businessman was charged with many crimes and was sentenced to a prison term in absentia. The oligarh was a vocal opponent of Russian President Vladimir Putin and criticized him a lot.

Yet the Russian President was indifferent to the criticism, said Putin's spokesperson in a recent interview to the Dozhd TV channel.

"It was unconstructive criticism," he said. "It wasn't aimed at offering anything constructive. It was criticism from a powerless enemy."

Peskov aslo said that Vladimir Putin "has no attitude to "such criticism, which was absolutely fierce, uncompromising, not aimed at a result, not aimed at some symbolic declaration of a war."

"He [Berezovsky] was definitely Putin's opponent, but, unfortunately, he was not only a political opponent, but probably an opponent in some other dimensions," Peskov said. "It is obvious that Boris Berezovsky spent a lot of money on supporting processes both inside Russia and outside it that can be called targeted against Russia and Putin."

"It is also obvious that he made very tough statements in which he said he intended to fight against Putin," Peskov added.

Putin's press-secretary described Berezovsky as "a very significant figure in politics" who "played a very important role" which had been "shrinking" since the 2000s.

"He worked for the Foreign Ministry and Russian embassies in the 1990s and observed the things taking place here from the embassies," Peskov explains. "[Yet] I would not overestimate his role in the 2000s. It was most likely minimal. He did not have any influence here. In the UK, where he lived, interest in Boris Berezovsky kept decreasing, and his role was shrinking, approaching zero."

Peskov confirmed that the letter written by Berezovsky to Putin exists, but at the same time expressed doubts that it can be published.

"The letter was addressed to Putin personally," he said. "I don't know if he will want to make the entire text of this letter public. The only thing I can say is that it was a personal letter."

Earlier Peskov told Rossiya 24 television on Saturday that Berezovsky wrote a letter to Russian President Vladimir Putin about two months ago, apologizing for "very many mistakes" and asking the head of state to help him return to Russia.

"A while ago, maybe a couple of months, Berezovsky sent Vladimir Putin a letter that he had written himself and in which he admitted committing very many mistakes, and asked Putin to forgive him for those mistakes and to help him return to his country," Peskov explains.

Before his death Berezovsky sat down with Forbes Russia and made it clear that he wanted to return to Russia and reassessed his position toward Russia and the Western system of values.

"Even when I faced criminal charges, I wanted to return to Russia," he told Forbes. "What I really underestimated is that Russia was dear to me, so that I couldn't be an emigrant."

"I changed a lot of my positions," he said. "I mean my opinions about Russia and the West. I absolutely idealized the posibility of buiding democracy in Russia. I idealized democracy in the center of Europe. I underestimated Russia's [political] inactivity and overestimated the West. And this reassessment was happening step by step."

Berezovsky also said that he had lost the sence of life.

The article is a combined report based on materials from Forbes Russia and Interfax.