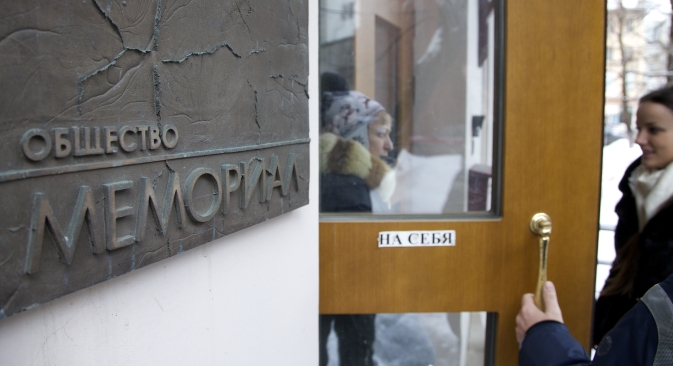 People talk near the entrance to human rights group Memorial's office, in Moscow, Russia, on Thursday, March 21, 2013, as prosecutors search for documents pertaining to all of its activities. Source: AP

Law enforcement organs are conducting mass checks of Russian NGOs. According to information from human rights activists, more than 40 organizations in 16 regions of Russia have already been inspected.

The Justice Ministry and the Public Prosecutor’s Office have announced their intention to check up on how the so-called Law on Foreign Agents is being enforced. Representatives of nonprofit and nongovernmental organizations are living in fear of lawsuits.

According to information from human rights activists, more than 40 organizations in 16 regions of Russia have already undergone checks. These include the Russian office of the NGO Amnesty International, as well as the famous human rights organization Memorial, which studies the history of repressions during the Soviet period and investigates human rights violations in war zones.

In some regions, officials from the local prosecutor’s office maintain that the checks are being conducted in order to determine whether the activities of organizations conform to legislation on fighting extremism.

Human rights activists are inclined to link these searches by the Public Prosecutor’s Office and the Justice Ministry with a desire on the part of government authorities to activate recent amendments to the law on nonprofit organizations, which went into effect on November 21, 2012 (better known as the Law on Foreign Agents).

These amendments instruct all nonprofits receiving funds from abroad and participating in political activities to register with the Justice Ministry as “foreign agents.” Foreign agents would then be subject to strict rules and control by the authorities.

Not a single nonprofit in Russia has deemed it necessary to register with the Justice Ministry. The concept of “foreign agents” has highly unpleasant connotations in the Russian language. The terminology used in the amendments was presumably borrowed from the Foreign Agents Registration Act (FARA) that was enacted in 1938 in the United States.

However, what is apparently a fairly neutral, legal term in America has an absolutely distinct, emotional tone in Russian. The term “foreign agent” is traditionally used with respect to spies. Consequently, many human rights organizations see in the demand to call themselves “foreign agents” an intentional and calculated humiliation.

Many nonprofit organizations, including the Moscow Helsinki Group, Memorial, Golos, Civil Assistance and For Human Rights, have refused to respect the demands of the law. In February, eleven nonprofits sent a complaint about the Law on Foreign Agents to the European Court of Human Rights.

“This law is absurd, even from a legal standpoint,” said Boris Kagarlitsky, director of the Institute of Globalization Studies and Social Movements. “The law can oblige us to do something or not to do it. But I don’t understand the law that demands that we call ourselves by a special name and make this known to the state organs.”

Boris Belenkin, a board member at Memorial, is sure that the current wave of checks is a reaction to Vladimir Putin’s words to his colleagues at the Federal Security Service on Feb. 14. The Russian president said that the new laws on nonprofits “must be enforced unconditionally.”

“The criteria according to which one may consider or not consider an organization a ‘foreign agent’ are very vague,” said Belenkin. “At the Justice Ministry, which is obliged to keep the new register, people could not imagine, for a long time, according to what formal signs an organization should be included in the register. I don’t rule out the possibility that these mass checks are being carried out now in part because they have finally come up with the necessary criteria. Or they’ll develop them after the checks — depending on what they manage to find.”

Belenkin added that this wave of checks will, in all likelihood, be followed by a wave of lawsuits: some prompted by violations of the Law on Foreign Agents, but others prompted by other violations, given the scale of the checks and the number of different organs doing the checking. “Memorial,” he said, “is ready for these sessions. It only hopes that the courts will be objective.”