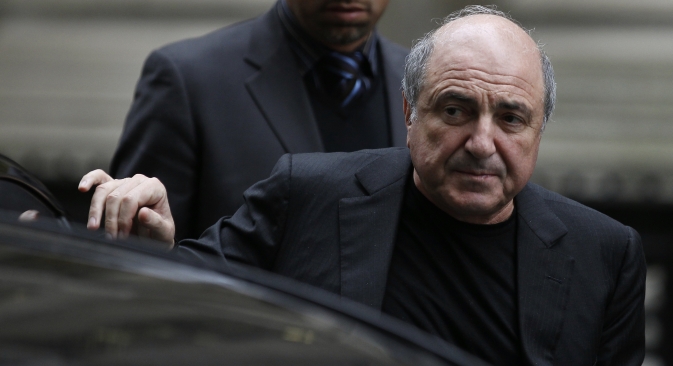 Boris Berezovsky's death has provoked a flurry of speculation about whether he committed suicide due to depression after his finances were reportedly destroyed by high-profile lawsuits. Source: Reuters

The death of exiled tycoon Boris Berezovsky, who remained a major irritant between London and Moscow, may finally give both countries a chance to turn the page.

In death, as in life, Boris Berezovsky – oligarch, kingmaker and dissident – continues to stir controversy and potential conflict between London and Moscow. While it remains unclear whether his death will allow both governments to move on, experts expressed the hope that relations will finally improve.

The March 23 death of the man once dubbed the “Godfather of the Kremlin,” who later became an implacable foe of President Vladimir Putin’s, has provoked a flurry of speculation about whether he committed suicide due to depression after his finances were reportedly destroyed by high-profile lawsuits.

A post-mortem examination showed that the cause of death “is consistent with hanging.” Nothing was found to indicate a violent struggle.

Hit by losing expensive lawsuits in recent years, Berezovsky struggled with depression. He broke the record for a British divorce payout with a £220 million ($ 335 million) settlement in 2011, and last October was ordered to pay his former business partner oligarch Roman Abramovich £35 million ($ 53 million) in legal fees after unsuccessfully seeking £3 billion ($ 4.5 billion) in damages for alleged blackmail, breach of trust and breach of contract.

Berezovsky emigrated to the UK in late 2000 to avoid facing fraud charges in Russia. He was twice convicted in absentia of defrauding Russia’s biggest airline, Aeroflot, and car manufacturer Avtovaz, of millions of pounds. He denied any wrongdoing.

Reportedly, the underlying cause of Berezovsky’s exile was a rift with Putin. Having acted as kingmaker in Putin’s bid for the presidency in 2000, Berezovsky, who controlled Russia’s biggest TV channel ORT and leading business newspaper Kommersant, switched sides – openly criticizing Putin for his alleged role in temporarily jailing another media mogul, Vladimir Gusinsky, in June 2000.

Three months later Berezovsky claimed to have received an ultimatum from the Kremlin to hand over his share in ORT to the state or “follow Gusinsky’s path.”

Britain demanded the extradition of suspect Andrei Lugovoi, another former Russian security service officer, but in vain. Berezovsky accused Putin of being behind the killing, while Russia officials vehemently denied any link to Litvinenko’s death, instead suggesting that Berezovsky himself was implicated in the murder.

The inquest into Litvinenko’s death has been postponed until October 2013 to let the coroner gather more evidence. Berezovsky would have been a key witness in the hearings.

“The Litvinenko case damaged Russian-British relations like nothing else,” said Vyacheslav Nikonov, president of Moscow-based Politika Foundation. Anthony Brenton, British ambassador to Russia from 2004 to 2008, says that Berezovsky was a big issue, as “Russia was very keen to see him extradited. They didn’t manage to persuade a British judge to extradite him, even though they tried a few times.”

More than Berezovsky’s opposition to Putin and potential influence over British policy towards Russia, the Litvinenko affair will continue to cast a long shadow over UK-Russian relations, a close associate of Berezovsky’s said.

“Berezovsky didn’t have so much influence in Britain, and certainly didn’t have access to British ministers,” the associate said. “Even close business friends such as Rupert Murdoch were not interested in taking part in his political fight with the Kremlin.”

Putin’s spokesman Dmitry Peskov said last week that Berezovsky had recently written a private to Putin, expressing his wish to return to Russia.

Sergei Markov, a political analyst close to the Kremlin, says that Britain “took an openly unfriendly stand refusing to deliver Berezovsky to Russia in spite of Russia’s repeated claims.”

The death of Berezovsky represents a chance for Britain to turn a new leaf and show it no longer “supports people only because they’re at odds with the Russian government,” Markov said.

James Sherr, Associate Fellow at London-based think tank Chatham House, said that while Berezovsky was “a negative factor,” he was also used as a bogeyman by the Kremlin. “It suited the interests of Putin and others to be able to point to him as an orchestrator of disruption and opposition in Russia from abroad … [but] Berezovsky's influence, in my view, was always overrated and it has been progressively declining.”

But Sherr said it would be “premature to say relations will improve” as the “broader issue” of human rights in Russia “is not going away.”

Brenton said that as “Berezovsky was a major opponent of Putin’s, relations may well get better – although to some extent this has already happened. Trade relations are now very good with Russia, and Foreign Secretary William Hague gets on well with his counterpart, Sergei Lavrov. Hopefully, life moves on.”