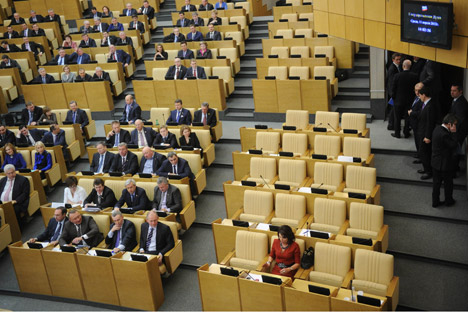 Russians believe that government officials, members of the Federation Council and State Duma legislators are the richest representatives of the authorities in the country and wish a property census to be introduced for them. Source: RIA Novosti / Gri

Analysts are certain that the process of United Russia’s self-purification was authorised from the very top and is indicative of the intention to carry out a rotation of the elites.

Russia’s legislators have continued to hand in their mandates for a fourth month in a row in the wake of suspicions of involvement in illegal business activities or of possessing undeclared properties outside Russia. Whereas before most of those who were leaving parliament were representatives of the Opposition, now some members of the ruling party have had to follow, as bloggers have unearthed evidence against them in the Internet. All this is proceeding against a backdrop of an anti-corruption campaign and the authorities’ plans to prohibit senior officials from having foreign bank accounts at all.

In view of the current public sentiment the authorities wish to carry out a replacement of the elites, analysts say. The new elite is to consist of people having the reputation of ascetics, indifferent to material values.

Federation Council member from Buryatia, Vitaly Malkin, whom the Opposition accused of having Israeli citizenship and properties in the United States and Canada, tendered his resignation on Tuesday. Malkin dismissed all the charges and explained his decision to quit by the intention to protect his honour and the honour of the Federation Council.

In March FC member Boris Shlegel left the upper house (his family made 127.7 million roubles in 2011) for health reasons. Nikolai Olshansky, featuring on the Forbes list, vacated his seat complaining about his poor health, too.

A month ago three members of the United Russia party quit the State Duma. The case of the head of the State Duma’s ethics commission, Vladimir Pekhtin, was the most notorious of all. Pekhtin was suspected of owning undeclared property in the United States several million dollars worth. Two more followed. One is Anatoly Lomakin, number 79 on the Russian list of Forbes for 2012 with a wealth of 1.2 billion dollars, and the other, Vasily Tolstopyatov.

Nine legislators were out of the State Duma over the past three months, and three others, agreed to say good-bye to their seats in the Federation Council. The FC rules of procedure committee has said that more resignations should not be ruled out.

Analysts are certain that the process of United Russia’s self-purification was authorized from the very top and is indicative of the intention to carry out a rotation of the elites.

“The rule postulating United Russia’s opponents can take no liberties at all, while loyalists can afford anything no longer works,” says the general director of the Centre for Political Technologies, Igor Bunin. “The Kremlin has introduced a new rule – ‘Those caught red-handed must go’.”

“The rules have changed. The legislator’s mandate or the ministerial post no longer give a free hand to build one’s wealth at any cost, in violation of any rules,” says the daily Vedomosti. “The upper tiers of power are aware of the wish of a considerable share of conservative and paternalist-minded allies of Putin to introduce a fairer, in their opinion, redistribution of benefits and assets and their anger over the much-publicised wealth of part of the bureaucracy and parliamentarians.”

“There are reasons to believe that the changed rules of the game will help Putin form a new layer of the political elite,” says the daily Nezavisimaya Gazeta. “The main emphasis will be not on the background – career of territorial origin, contrary to what has been observed so far, but on the reputation of true ascetics, people indifferent to material values.”

As member of the Russian presidential staff has said on the condition of anonymity, “either you are impeccable, and then you are in the ruling team, or you have foreign properties and bank accounts, but then you will stay barred from the civil service job.” The Kremlin believes this is something “not only legislators, but also government members and the heads of regions that should give thought to.”

“If there is public demand for the renewal and purification of the authorities, than that demand has to be met. Time is ripe for every single person to make one’s mind,” the official said.

And the demand is unmistakably there. Levada Centre sociologists have summarised the intermediate results of the anti-corruption campaign. It has turned out that most Russians are certain the highest authorities must be personally responsible for the embezzlement committed by their subordinates. Two-thirds of the polled demanded immediate introduction of a property qualification for civil servants and legislators.

Russians believe that government officials, members of the Federation Council and State Duma legislators are the richest representatives of the authorities in the country and wish a property census to be introduced for them. Sixty-two percent of the polled have suggested such a qualification be mandatory for all applicants for a civil service job. The officials must have an idea what sort of conditions “ordinary people have to live in.”

One in three respondents (33 percent) said it is just not decent for an official or a civil servant to be very rich. And half of the polled said it was just a crime.

In the near future Russian legislators and civil servants will have to disclose their foreign accounts and assets. Otherwise they should brace for punishment, including criminal punishment. The State Duma will consider an appropriate bill in the second reading as early as April.