The London-based International Institute for Strategic Studies (IISS) has released its annual assessment (this year entitled “The Military Balance 2013”), reviewing, among other things, defense spending by different countries. The report argues that Russia’s defense spending rose last year, while the global economic crisis forced the United States and Europe to cut expenditures in this area.

“Reflecting the subdued global economic climate, total defense spending actually fell in real terms in 2012, for a second year running. Yet real increases were seen in the Middle East and North Africa, Russia and Eurasia, Latin America and in Asia, while real declines were seen in North America and Europe. As we predicted this time last year, 2012 saw nominal Asian defense spending overtake that of NATO European states for the first time,” IISS Director General John Chipman said at the launch of “The Military Balance 2013.”

Forty-five of the report’s almost 600 pages are devoted to Russia and the countries of the former Soviet Union, discussing Russia’s military reform at length. In particular, IISS analysts point out that, following last year’s resignation of Anatoly Serdyukov and his replacement by Sergei Shoigu as defense minister, the reform is likely to proceed in the same direction as before.

US and Russia to resume missile-defense talks

According to publicly available data that can be found easily online, the U.S. Congress has approved defense spending of $550 billion for 2013. This is, admittedly, almost $100 billion less than in 2012 or 2011. The U.K. spends $90 billion on its own army and navy, ranking as the world’s third biggest spender after China ($120–150 billion) and followed by France in fourth place ($70 billion). Russia is only fifth, with $55–60 billion. So why is defense spending falling in the United States and Europe and rising in Russia?

It is no secret that the U.S., like many other Western nations, is suffering economic difficulties right now. The overall budget is being cut, and the Pentagon’s defense spending is no exception. The war in Iraq is over, which has helped reduce spending by a lot; the U.S. is pulling out of Afghanistan and stopped short of engaging in active warfare (at least on the ground) against the Qaddafi regime. 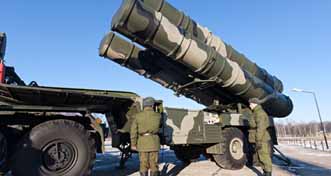 The U.S. government has sharply reduced purchases of the fifth-generation, multirole, F-22 aircraft (a few hundred units instead of the original 700) and its “light” version, the F-35. Its NATO allies are also cutting down on their orders for the machine, and it is easy to see why.

In fact, those fighters are unrivaled today. Perhaps only Russia could pose a challenge in the near future, once its Prospective Airborne Complex of Frontline Aviation (PAK FA) T-50 is commissioned in 2015. However, neither the U.S. nor NATO is going to go to war with a nuclear-missile-equipped Russia. For the wars they have been waging in recent years (in Iraq, Afghanistan, Yemen, Somalia, Mali, Libya, Yugoslavia), the military hardware and combat support systems the Western armies already have suffice.

Of course, it is impossible to take high-tech orders away from the American and Western European military-industrial complex. Boeing, Lockheed, Dassault, Grumman, and BAE Systems with AEDS will ever let this happen, even though the share of their civil products is no less than their military orders — except that defense orders are the most juicy and lucrative ones.

This is why, even as they reduce their defense spending (including the recently announced cancellation of the deployment of stage four of the American missile defense system in Europe), the West and the U.S. will never sink to the level of Russia’s defense spending.

Why, then, is Russia’s defense spending rising? During the 20 years since the collapse of the Soviet Union and the establishment of the Russian state in its stead, the funding for re-armament of the Russian army and navy was virtually zero. The share of modern military equipment has fallen to 10 percent. The Georgian army’s attack on Russian peacekeepers stationed in South Ossetia in August 2008 was an eye-opener.

The Russian army defeated the Georgian troops mainly thanks to its courage and fortitude, rather than advanced military equipment. It was only after those events that 20 trillion rubles ($700 billion) were allocated in 2011 for re-armament of the army and navy over the next 10 years. Once again: over 10 years.

1.3 trillion rubles was allocated in 2011, some 1.4 trillion in 2012, and 1.5 trillion in 2013, as was planned. Modern hardware will not appear in military units overnight, though. First, there is the tactical and technical assignment for designers; next comes R&D work and the construction of prototypes, which then undergo military and government testing. Only then, if everything is OK, do deliveries begin. The army and navy should be upgraded by 70 percent by 2020, thanks to those investments.

Hence, there is no particular military secret in the increase of Russia’s defense spending, and using it to spook the Western general public is a thankless and dishonest task.