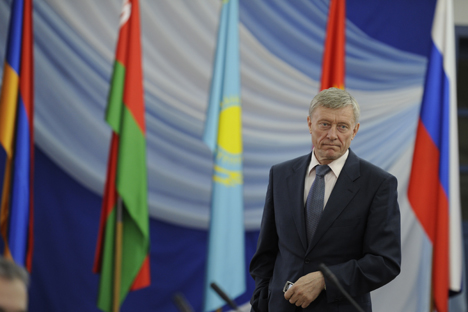 The Collective Security Treaty Organization Secretary General told about relations with NATO and how it counters internal and external threats. While information security has become a priority concern for both organizations, the CSTO considers NATO to have a different position in its approach.

A year ago, the Collective Security Treaty Organization (CSTO) approached NATO about establishing formal relations, but NATO made no response to the offer. CSTO Secretary General Nikolai Boryduzha explained to Kommersant why this happened, touching also on the new activities the organization is undertaking in order to counter internal and external threats.

Kommersant: Some NATO countries are in favor of cooperating with the CSTO, but NATO leadership is not interested. Doesn’t that bother you a little bit?

Nikolai Boryduzha (N.B.): Not really. Establishing relations with NATO is not the be-all and end-all for us. We are a self-sufficient organization. We have a wide range of projects, programs and activities that we are pursuing in the interests of our states.

We suggested that we pursue these goals together with NATO, because we see that the challenges faced by CSTO member states are similar – if not identical – to those faced by NATO states.

Take, for instance, Afghanistan. NATO is inside Afghanistan and we are on its perimeters. We could coordinate our efforts, even if it is only on such problems as drug trafficking: the drugs still reach Europe, after all. But they’re not ready for that yet.

CSTO a NATO for the East?

N.B.: Read U.S. State Department wires on WikiLeaks and you will understand everything. “Big Brother” won’t allow it and everybody listens.

Kommersant: Cybersecurity is becoming a key concern for NATO, which is developing a strategy in this field and using Estonia to model cyberwars. Some NATO countries are developing offensive cyberweapons. Does that worry the CSTO?

N.B.: Information security is the number one issue today. You don’t need troops and mountains of military hardware to destabilize the situation in a country. You just need to target your information resources on that situation. You can rock a country by influencing public opinion there.

Recent practice shows that it is a very effective instrument. How did the Arab Spring start? With an information attack on the populace. That is why, realizing this sphere has key significance for collective security, we have been working on it for several years.

Kommersant: You have said that the Arab Spring was instigated from outside. Who instigated it?

N.B.: Information resources are used by various forces – extremist groups, religious structures and criminal communities – and also by states that seek to achieve their political goals through information technology.

N.B.: That topic is not under consideration. We are talking in terms of defense. Our bloc only ensures the security of our states.

Kommersant: NATO also seems to be concerned only with defense, which does not prevent its members from developing such technologies.

N.B.: NATO has a somewhat different status. We do not position ourselves as a global organization. We do not seek, like NATO does, to take part in operations in Afghanistan or Libya – that is, in countries that are outside the borders of our member countries.

Kommersant: The CSTO recently set up an Association for the Analysis of Informational and Analytical Structures. What will it its activities be?

N.B.: The CSTO is charged with analyzing the situation, the risks and threats faced by our states, and developing pre-emptive measures to keep these threats at bay. We are conducting a lot of analytical work to this end, but these efforts are not sufficient. We would like to get information from other sources, in order to assess the situation objectively.

That is why we have suggested that a number of analytical centers in CSTO countries join this structure. They would exchange information, have periodical meetings and discuss topics of common concern.

Kommersant: Will they deal only with external threats?

N.B.: No, we are interested in everything to do with security, regardless of whether the threat is external or internal.

The problem is how to react to these external or internal threats and whether the CSTO should be brought into it. There are some things that are taboo for us. That applies, above all, to internal politics. But we still have to be aware of them. And we need to predict how the situations will develop.

Box: CSTO experts to discuss the situation after NATO withdraws from Afghanistan