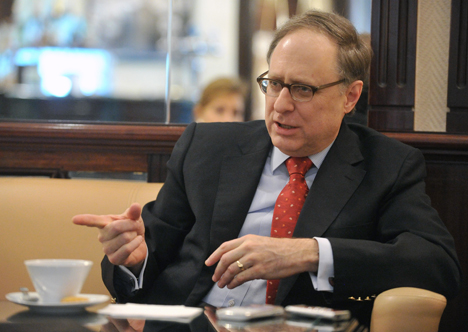 NATO's Alexander Vershbow: "We propose to create two centers that would allow NATO and Russia to share information around the clock, including intelligence, joint planning, and coordination of operations". Source: Kommersant

NATO Deputy Secretary General Alexander Vershbow hopes that dialogue of deployment of an ABM system in Europe can be activated in the coming months.

NATO hopes that, in light of the U.S. decision to cancel the fourth phase of its ABM system in Europe, a dialogue with Russia is now possible; the two parties might even consider working on a joint missile-defense system. Russia has reacted with caution to these statements, though it welcomes a re-opening of dialogue.

In the words of NATO Deputy Secretary General Alexander Vershbow, his recent visit to Moscow focused on new avenues of cooperation in missile defense, which could open up as a result of the rejection of the fourth phase of deployment of an ABM system in Europe.

"We hope that in the coming months a dialogue in this field can be activated, so that we can start building a joint ABM system to protect both NATO and Russia," Vershbow said in an interview published on April 1 by Kommersant.

US and Russia to resume missile-defense talks

He added that the task was to ensure "a high degree of integration between the two systems and command structures that will operate apart from each other."

"NATO is responsible for the defense of its territory, and Russia likewise. But there is potential to integrate the two systems. We propose to create two centers that would allow NATO and Russia to share information around the clock, including intelligence, joint planning, and coordination of operations," Vershbow said.

Earlier it was reported that, following lengthy consultations between the Pentagon and its NATO partners, the decision was made not to develop SM 3 Block II B interceptors.

"The savings will be directed to other aspects of the program – in particular, work to improve the accuracy of other interceptors," said NATO's deputy secretary general.

On March 15, U.S. Defense Secretary Chuck Hagel announced a major program through 2017 to strengthen U.S. missile-defense in light of the North Korean threat. In particular, the U.S. plans to place additional interceptors and radars in Alaska.

Russia, however, is cautious about the U.S. decision to wind up the last phase of its ABM system in Europe. Russia's permanent representative to NATO, Alexander Grushko, noted that the fundamental issue still had not been resolved.

"The main inconsistency is NATO's unwillingness to guarantee that the system will not be directed against Russia's strategic and nuclear weapons," Grushko is quoted by RIA Novosti as saying.

Editor-in-chief of "Natsionalnaya oborona" ("National Defense") magazine, Igor Korotchenko, in an interview with the BBC Russian Service, noted that, "as soon as the U.S. considers it necessary and feasible to launch the fourth stage of the European ABM system, it will do so immediately."

Next Russia-NATO Council meeting to take place in April

Nevertheless, Russia's Foreign Ministry views the desire to re-open the dialogue with Russia as a constructive step.

"Russia and the United States have a special responsibility to maintain global strategic stability, and the level of mutual trust between our two countries is a key factor in international security," reads a statement issued by the Foreign Ministry on April 1.

Russia's Foreign Ministry observes that, despite "tangible harm" inflicted on bilateral relations by the Magnitsky Act, the "unlawful court rulings on the Schneerson Collection," and the "failure of U.S. authorities to provide adequate protection for the rights of adopted children from Russia," Moscow and Washington have managed to agree on a number of very important issues in the past four years.

These include the START Treaty, the simplification of visa procedures, and Russia's accession to the WTO.

"We welcome Washington's desire to return to a constructive dialogue, and [we] are ready to work together closely," the Foreign Ministry statement continues.

Meanwhile, responding to other questions from Kommersant on Russia-NATO cooperation, Vershbow touched upon the transportation of goods to Afghanistan via a proposed transit center in Ulyanovsk. He mentioned that NATO considers the transit route through Ulyanovsk to be economically unviable.

"NATO is examining alternative and less expensive transport networks. For example, the transit routes through Pakistan are now fully open again, and that is the most cost-effective way," he said, noting that NATO was looking for the best deal.

This article is based on materials published by Kommersant, Vzglyad, RIA Novosti, and the BBC Russian Service.