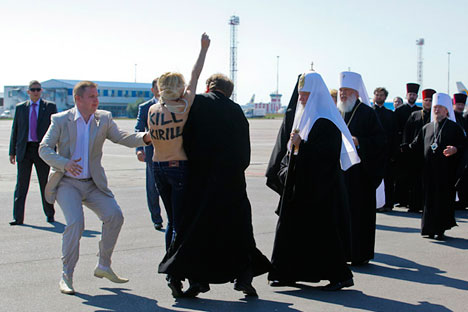 An activist from Ukrainian women's rights group FEMEN performs an act of protest against the Russian Orthodox Patriarch Kirill upon his arrival at the Kiev airport on July 26, 2012. Source: AFP

RBTH recollects the most noticeable tricks pulled by the Ukrainian feminist group FEMEN, whose members came to prominence after their attack on Russian President Vladimir Putin during his visit to Hannover, Germany in April.

They do not wear balaclavas, as they have not the slightest intention of concealing their faces. They not only dance in churches but also ring church bells. They have published numerous photographs and videos depicting their scandalous actions on their website.

FEMEN has even coined a special term – “sextremism” – to explain the ideology behind their deeds.

1) A recent attack on Putin at a meeting with German Chancellor Angela Merkel was not the first time that FEMEN had voiced their indignation with the Russian President face-to-face.

In December 2012, the “new Amazons” attempted to sabotage the EU–Russia summit by gathering at the airport in Brussels to “welcome” Putin with such slogans as “Putin is the Apocalypse” and “Putin is euro collapse.”

Many people wonder how these topless young women, with their bodies covered with provocative statements – or without them, for that matter – managed to break through the several lines of security guards that always accompany high-profile politicians.

In an interview with Belarus’ Euroradio, FEMEN activist Alexandra Shevchenko explained: “I’m not going to expose the whole system to you; nor will I reveal its technical details. What is key, though, is a lack of fear of Putin and his armed bodyguards.” As simple as that.

2) Vladimir Putin is not the first Russian public figure to fall prey to FEMEN’s shouting and public nudity. Patriarch Kirill of Moscow and All Russia almost became the victim in an incident that involved the Ukrainian women shouting political obscenities. The head of the Russian Orthodox Church was caught off guard at the airport in Kiev, at the very beginning of his friendly visit to Ukraine.

Incidentally, bare breasts constitute an integral part of all FEMEN demonstrations. As they explain on their website, they “defend sexual and social equality in the world with their breast.”

3) Another odd event took place in May 2012 in Dnepropetrovsk, Ukraine, when the girls executed an audacious raid against the UEFA Cup. The city was hosting one of the Europa League’s stages, so the activists joined the line of people waiting to take a picture with the trophy. As they approached the prize, they knocked it down together with the support. A few days before this, another feminist had also overthrown the trophy during its presentation in Ukraine’s capital city of Kiev.

Praising their “accomplishment” on the official website, FEMEN explained the reason for their antipathy for football. They accused UEFA of “promoting sex tourism, [encouraging] the sex industry in the cities of the Euro tournament, encouraging drunkenness and mental debilitation of the population.” This protest cost activist Irina Shevchenko 340 hryvnias ($42) in imposed fines in court.

4) The action undertaken by and subsequent detention of members of the Russian punk-rock band Pussy Riot did not go unnoticed in Ukraine. FEMEN hailed the Russian mavericks, who staged a “punk prayer” at the Christ the Savior Cathedral in Moscow in 2012. On the day of Pussy Riot’s indictment, the Ukrainian activists – topless, as usual – took a chainsaw to a memorial cross installed in Kiev in remembrance of people repressed by Stalin.

5) In fact, Pussy Riot members were not the first to stir up trouble at the Christ the Savior Cathedral. In December 2011, two months before Pussy Riot’s performance, FEMEN activists held their own demonstration in front of the church.

The girls were even able to escape arrest, as they took their “God Save the Czar” banners, put their clothes back on and left the scene by metro. Even so, this action of theirs did not find support among the people, who mostly posted negative comments beneath the photographs published on the Internet.