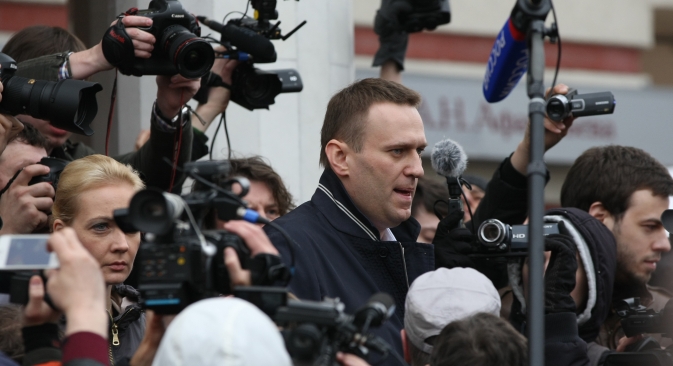 With Russian opposition leader Alexey Navalny facing criminal charges and expecting the court trial on April 24, some Russian politicians warn against making political activity an excuse for criminal prosecution or a means of protection from criminal sanctions.

An Investigative Committee official says the case against opposition leader Alexei Navalny has been accelerated because the blogger deliberately drew attention to himself. At the same time, Russian State Duma Speaker Sergei Naryshkin warns against making political activity an excuse for criminal prosecution or a means of protection from criminal sanctions while commenting on the criminal charges againts the blogger.

Meanwhile, Navalny has denied all charges against him and maintains that he has been framed by the Investigative Committee.

If Alexei Navalny had not “made fun of power,” he still would have found himself in court – albeit not so soon – spokesperson for the Investigative Committee, Vladimir Markin, told the newspaper Izvestia.

“The committee might have taken more time to get around to the case if it were a banal embezzlement. But since the man is going out of his way to attract attention and is in fact teasing power – as if to say, 'look at me, I am different from everyone else' – interest in his past  was quickened and the process of bringing him to account naturally speeded up,” said Markin.

He stressed that the investigation in the Navalny case has nothing to do with politics.

“Politics in this case is present only in connection with the personality and actions of the accused […] Were it not for Navalny’s obsessive politicizing, the case would be totally devoid of politics. On the contrary, everybody – including the opposition – would be pleased to see another crook exposed,” the Investigative Committee spokesperson said.

“Our business is to initiate and bring to court a criminal case if there are facts and evidence. If we hadn't followed the correct procedure, that would have meant a politically selective approach. We institute proceedings against members of parliament, so why should a street demonstrator enjoy some kind of immunity? Because somebody is supporting him in the West? This may be possible in a weak country, but not in Russia,” Markin said.

He noted that, even if convicted by the court, Navalny has a chance of remaining free.

“The court may take an objective view of the services and personality of the accused, his public standing. Some prominent public figure may guarantee that he will cease such actions. In this case, non-custodial punishment may be meted out,” said Markin.

Meanwhile, Russian State Duma Speaker Sergei Naryshkin has advised against making political activity an excuse for criminal prosecution or a means of protection from criminal sanctions regarding the criminal charges againts Navalny.

Analysis:What does Navalny get from running for presidency?

"In a law-abiding state political views or political activity permitted by the law should not be treated as a reason or an excuse for criminal prosecution. At the same time, political convictions cannot serve as a means of protection from criminal sanctions either," he told journalists on Thursday, when asked to comment on his attitude to the Navalny trial.

In a law-abiding state, all people should be equal before the law - whether they are ministers, media company owners or insurance agents, Naryshkin said.

Only courts can establish peoples' guilt, he added.

"Any arguments by politicians and political scientists expose their legal illiteracy and their lack of legal culture. That is why I would refrain from assessing this trial and the extent of his guilt or innocence," Naryshkin said.

Alexei Navalny, a Russian opposition leader, is accused of masterminding the theft of more than 353,000 cubic feet of timber belonging to a state-owned company in 2009. This offense may carry up to a 10-year prison sentence.

Navalny’s trial will begin on April 17.

Navalny denies all accusations and claims that the Investigative Committee has framed him. In his opinion, the law enforcement bodies are trying to prevent him from engaging in political activities.

In late March, Navalny published business correspondence on his blog, claiming the messages prove his innocence.

“Anyone can look at the document and draw his own conclusions. Don’t take anyone at their word – verify everything,” Navalny wrote on his site.

The opposition leader has also posted the full text of the indictment with his own comments.

This article is based on materials from Izvestia, Interfax and RIA Novosti.