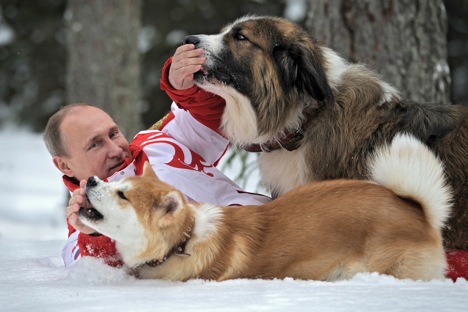 Putin's position is relatively comfortable, but is there any guarantee that the street protests will not emerge with renewed vigour? Source: Alexsey Druginyn / RIA Novosti

In the absence of significant economic achievements, Vladimir Putin is trying to consolidate support on the basis of conservative values.

Although Vladimir Putin is still the most popular politician in Russia, the trend is clear: the first year of his third term saw his confidence rating fall from 60 percent to 52 percent.

His last election campaign was held against the backdrop of some of the largest anti-government demonstrations in the history of modern Russia, involving mainly members of the urban middle class.

Over the past year, the discontent has gradually faded, and today his position is relatively comfortable. But is there any guarantee that the street protests will not emerge with renewed vigour?

On the eve of the last presidential election, many analysts said that Putin needed to revamp his image and become ‘Putin 2.0’ in order to win over the “angry public.”

However, the opposition has repeatedly described the actions of the authorities over the past year as a “crackdown.”

“Putin has come to the conclusion that change could result in vulnerability,” says Alexei Makarkin, first vice-president of the Centre for Political Technologies. “He does not make concessions, since he believes that they will induce further concessions.”

The most resounding event of Putin's third term so far has been the trial of punk band Pussy Riot, who received two years in prison for singing “Holy Mother of God, drive Putin out,” inside Moscow's Cathedral of Christ the Saviour.

Late last year, U.S. citizens were barred from adopting Russian children in response to the Magnitsky Act, so named in honour of deceased lawyer Sergei Magnitsky, who died in a Russian detention centre.

The laws on mass rallies were tightened and a campaign launched against the promotion of homosexuality among minors.

Twenty-seven people suspected of provoking public disorder during the anti-government rallies on the eve of Putin's inauguration are currently under investigation. The trial of one of the leaders of the anti-Putin protests, Alexei Navalny, accused of financial fraud, is underway.

Non-governmental organisations in receipt of funding from abroad and involved in political activities have been assigned the status of “foreign agents,” which in the Russian language means “spies.”

At the same time, more than 1800 social organisations have joined the All-Russia People's Front (APF), founded by Putin in May 2011 under the auspices of the ruling United Russia party. Of the 238 people elected to the State Duma in 2011 on the United Russia list, 80 represent the APF.

“The APF unites people who are doers: doctors, teachers, miners,” says renowned sociologist Olga Kryshtanovskaya. “The format suits Putin — he feels at ease with these people and wants to understand the issues they are worried about.”

“The party line is to consolidate 'its own',” says Alexei Makarkin.

These “own” people (Putin's core electorate) are, according to sociologists, residents of small towns and villages with secondary education who do not use the Internet.

“They can be consolidated on the basis of conservative values, anti-liberalism, and anti-Westernism,” believes Makarkin. “The adoption of the law on ‘foreign agents’ designates a clear enemy, while the case of Pussy Riot marks out another.”

Against the backdrop of scandals that have plagued United Russia, mainly involving undeclared assets abroad, Putin charted a course to “nationalize the elites.” Officials have until July 1 to rid themselves of foreign bank accounts. Owning real estate abroad, however, is not prohibited.

Putin plots to avert a crisis while retaining power

“Putin's drive to tackle bureaucracy is aimed at ensuring that people return their property and interests to Russia,” says Olga Kryshtanovskaya.  “A clear choice has been put before them: serve your country or pack your bags.”

Late last year, Putin signed a law obliging civil servants to declare their expenses and those of family members.

Last year also saw Russia's most high-profile corruption scandal in recent years, resulting in the dismissal of Anatoly Serdyukov from his post as defence minister.

“Regarding the government's attempts to deal with corruption, nothing has really changed,” asserts Elena Panfilova, general director of the Centre for Anti-Corruption Research and Initiatives under the association Transparency International Russia. “We have a narrow profile that touches upon the most essential things, i.e. not run-of-the-mill bribery. Everything is more or less aligned and being implemented, but when it comes to major corruption, everything always goes awry.”

“The structure and quality of the economy remain unaltered”

The main economic purpose of the government, in the words of Prime Minister Dmitry Medvedev, is to ensure annual growth of “at least 5 percent of GDP.”

According to the forecast of the Development Centre under the Higher School of Economics (HSE), this year will see Russia's economy grow by just 2.4 percent, “due to a lack of growth drivers.” In 2012, the rate of growth decreased from 4.3 percent to 3.4 percent.

“The new Russian economy is diversified, and other competitive sector will develop alongside the modern fuel and energy complex,” wrote Vladimir Putin in a pre-election article in January last year.

According to the Federal Customs Service, in 2012 fuel and energy products comprised the bulk of Russian exports beyond the CIS, making up 73 percent of the commodity composition of exports to non-CIS countries. Exports of machinery and equipment accounted for 3.6 percent.

Meanwhile, foreign direct investments in 2012 declined by almost 20 percent to $39 billion. “The back of last year saw a resumption of headlong growth in wages against productivity (ULC growth), which makes Russian industry even less attractive for investment,” conclude experts at the HSE. “The structure and quality of the economy remain unaltered.”

One of the key economic events of the past year was Russia's accession to the World Trade Organisation. “Russia's upcoming membership of the WTO promises to be very difficult,” admits Alexei Portansky, director of the Information Bureau on Russia's Accession to the WTO. “If inertia or raw materials prevail, Russia will get nothing from membership of the WTO. The country can sell ​​hydrocarbons and other raw materials without it.”