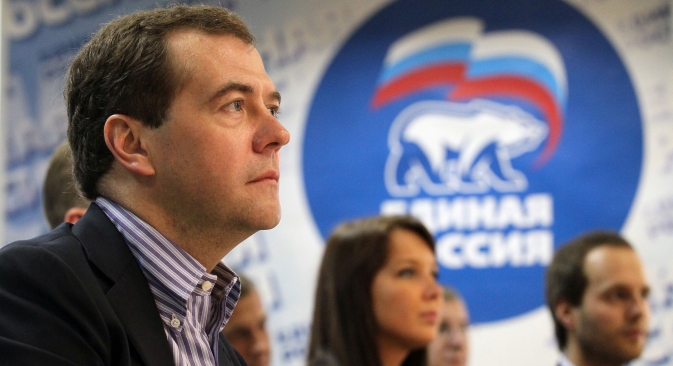 As United Russia’s reputation continues to suffer and Vladimir Putin voices increasing support for his People’s Front, what’s in store for the ruling party?

Once an all-powerful vanguard party that helped President Vladimir Putin consolidate support and increase his influence over Russian politics, United Russia has seen better days. Now, with its reputation damaged amid a string of scandals and growing political awareness among Russia’s opposition-minded classes, some experts say the ruling party faces an uncertain future.

“Inside the Kremlin, some people probably thought it would last forever,” said Yury Korgunyuk, a political analyst at the INDEM think tank in Moscow. “But sooner or later, the enthusiasm fades. People have begun to look at Putin, and particularly at this structure that was created for him, with far more skepticism than before.”

The past several months alone have seen a series of corruption scandals ripple through the ruling party – the most serious of which resulted in senior member Vladimir Pekhtin stepping down in February from his post as the head of the State Duma’s ethics committee amid allegations leveled by opposition blogger Alexei Navalny that he owns undeclared luxury property in the United States.

The persistence of the anti-Kremlin street movement has also proven damaging to the party’s reputation: According to a recent survey by the independent Levada Center polling agency, around 40 percent of the population agrees with the moniker “party of crooks and thieves,” coined by Navalny for United Russia. That figure is up from around 36 percent last year.

But the question remains: if United Russia is in trouble, will it reform, or fade completely from Russia’s political arena?

Observers say a downturn in support for the ruling party, which was fast-tracked by the outbreak of anti-Kremlin protests in December 2011, has led to Putin’s increasingly vocal support for the All-Russian People’s Front, a broad alliance created in May 2011 that brings together loyal politicians and leaders from an array of civic organizations across Russia.

Pitched as a union of civic forces  – comprised of trade unions, veterans’ associations, and other groups – rather than a political coalition per se, the People’s Front will “play a big part…as a broad platform where people with different views and approaches can work out a consensus on resolving our key development problems,” Putin told a televised conference with front members in late March.

The president’s renewed support for the group has led observers to speculate whether the People’s Front will replace United Russia altogether as a support base for the Kremlin. Since the outbreak of the protests, Putin has gradually disassociated himself with the United Russia– preferring instead to leave it to Prime Minister Dmitry Medvedev – over what experts say has been the party’s loss of credibility.

“At the moment, Putin wants to remain outside the party so that United Russia’s reputation doesn’t tarnish his image,” said Olga Kryshtanovskaya, a sociologist, former United Russia party member and an expert on the Russian ruling elite.

She added that the party’s lack of ideology and political direction, now caught somewhere between Medvedev’s relative liberalism and the majority’s conservatism, has further hampered the party.

Yet the Kremlin has not quite abandoned the ruling party. Just last month, Putin emphasized the “need to preserve the unity of the United Russia faction in the State Duma,” according to comments by RIA Novosti. To be sure, the party remains by far the most dominant force in politics and, despite some disappointments, secured comfortable victories in last October’s nationwide regional elections.

Russian politicians to set up their own schools

In a recent interview with independent news portal Lenta.ru, Andrei Isayev, deputy secretary of the party’s general council, acknowledged that the ruling party faces few threats to its current grip over the State Duma.

“I must disappoint those who are prepared to see United Russia disappear in the coming years,” he said, adding that an ongoing media “campaign” is aimed at discrediting United Russia.

Hints that the ruling party is keen on both prolonging and even reforming its existence arrived with the recent launch of a United Russia “civic university,” aimed at training future cadres of party members. According to Medvedev, who addressed the university’s opening ceremony late last month, the school will help improve party recruitment and communication – both with the press and its electorate.

Nevertheless, United Russia is likely looking down the road at the next Duma vote, which some have speculated could arrive as soon as within a year, should Putin decide to dissolve parliament and call snap elections.

And here may lie the key to the party’s – and the front’s – future.

Legislation recently submitted by Putin would enact changes to the method of electing representatives to the State Duma.  Under the proposed law, half of the legislature would be elected from political party lists and the other half chosen from single-mandate constituencies. Some experts say this would allow fresh-faced, Kremlin-loyal candidates outside of United Russia to run as independents under the banner of the nominally apolitical People’s Front.

According to Kryshtanovskaya, that could pave the way for cohabitation in parliament between the People’s Front and United Russia, creating an even stronger – and, arguably, more credible – parliamentary base of support for the Kremlin.

“I don’t exclude that in the more distant future, we’ll see a two-party system,” she said, “in which United Russia would be a center-right party, and the People’s Front a center-left party.”

Skeptics, however, doubt the efficacy of Putin’s new pet project – partly because of its unclear strategy, and partly because of its association in voters’ minds with the discredited ruling party. Korgunyuk, the INDEM analyst, says the People’s Front has so far failed to prove itself as anything but a “subset of United Russia, whose true functions are unknown.”

As for United Russia itself, according to him, its fate is dependent largely on Putin, especially given Russia’s system of personalized politics.

“If Putin were to lose power tomorrow, absolutely nothing would remain of United Russia,” he said.