In Q&A, Putin talks about terror, takes on critics 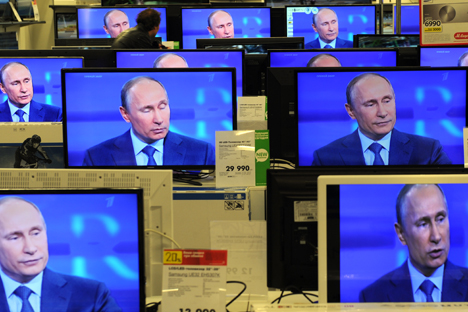 Televisions in a Moscow department store showing Vladimir Putin's televised session: He discusses a range of domestic and international problems, including international terrorism, corruption and the plight of opposition. Source: AFP / East News

In a five-hour televised session, Vladimir Putin decries foreign interference in Russian domestic politics and gets tough with local critics.

His international agenda focused on Russia’s relations with the West, notably with the United States.

Putin thanked the U.S. for assisting Russia with WTO accession and repealing the Jackson-Vanik amendment, which restored permanent normal trade relations between the two countries after a 40-year break. At the same time, Putin condemned the U.S. for passing the Magnitsky Act last year to impose visa and financial restrictions on a bunch of Russian officials, calling it “another anti-Russian law.”

Putin also criticized Western governments and media for describing as insurgents “terrorists who committed atrocious, bloody, abominable crimes in our country.” Nevertheless, he pointed out that the recent terrorist attack in Boston should “encourage us to work harder to avert mutual threats.”

“Are they crazy?” Putin said. “Have they restarted the Civil War there?”

Putin underscored that Russia, itself a victim of international terrorism, has always called for strengthening cooperation on security with the United States.

He touched upon the issue of sexual minorities’ rights, which was raised at his most recent top-level talks in Germany and the Netherlands.

“They have their standards,” he said. “If a court in the Netherlands has allowed activities of an organization that spreads pedophilia, why should we adopt such standards?”

Twelve minutes of the show was taken up by a debate with former Finance Minister Alexei Kudrin, a longtime ally of Putin’s, who was fired by then-President Dmitry Medvedev in September 2011 after criticizing the government for high defense spending.

Kudrin challenged Putin over the economy, pointing out that “domestic factors have had more influence on the Russian economy than global ones.” Putin had stressed that the recession in the European Union, Russia’s top trading partner, had been the cause of a slowdown in Russia’s economic growth.

Both Putin and Kudrin agreed, however, that it was vitally important for Russia to get over its oil dependency. Later, Putin referred to “the shale gas revolution,” assuring his audience that Russia hadn’t missed it and that it has enough natural gas to pump. He pointed out that the cost of shale gas was still too high, and its production involves a high risk of environmental pollution.

Putin went live as one of his fiercest critics and would-be presidential candidate, Alexei Navalny, stood trial in the city of Kirov, 900 kilometers to the east of Moscow.

Navalny, whose team of anti-corruption activists has exposed misappropriation of state funds worth $2 billion through government procurement monitoring, is being charged with embezzling $500,000 worth of timber while serving as an advisor to Nikita Belykh, the liberal governor of the Kirov Region, in 2009. Navalny has denied any wrongdoing, and has called the charges a political frame-up.

“Those who fight corruption should be crystal clean themselves,” Putin said of Navalny, adding that he had urged Russia’s Investigative Committee and Prosecutor General’s Office to be as objective as possible in the Navalny case.

Meanwhile in a court in Moscow, an independent election watchdog, Golos, was fined $10,000 for refusing to register as a “foreign agent.” Last year Putin signed a law obliging NGOs funded from abroad to register as “foreign agents,” which in the Russian language is equivalent to foreign spies.

“We welcome the work of NGOs, even that of our opposition colleagues,” Putin said. “If this activity is financed from abroad, it’s not bad, but they should tell us… where they receive cash from, for what, and what it goes toward.”

At another trial in Moscow on Thursday afternoon, leftist opposition activist Konstantin Lebedev was sentenced to two and a half years in jail on a plea bargain for allegedly plotting unrest at a mass anti-Putin rally on May 6 last year.

“One is condemned not for political views but for violating the law,” Putin replied to a question from Alexei Venediktov, the editor-in-chief of liberal Echo Moskvy radio, who argued that government critics are cracked down on with Stalinist methods. But Putin condemned using opposition street protests “for PR purposes.”

He also reiterated his commitment to fight corruption and confirmed that officials will have to close their accounts abroad if they have any. Otherwise they’ll have to resign. “Let them decide what’s more important to them: to keep money abroad or to serve Russians.”

Putin fielded a series of questions about a letter that the late Boris Berezovsky, who died in the UK in March apparently from suicide, allegedly wrote to him earlier this year.

“I didn’t want to broach that, but I can’t dodge it either,” Putin said. “There were two letters. These letters were of a personal character, even though I had no close relationship with him.”

When asked if he’d allow Berezovsky’s body to be buried in Russia, Putin replied: “Of course. Is my permission required?”

Putin added that Russian authorities had no information about any involvement of foreign secret services in Berezovsky’s death.