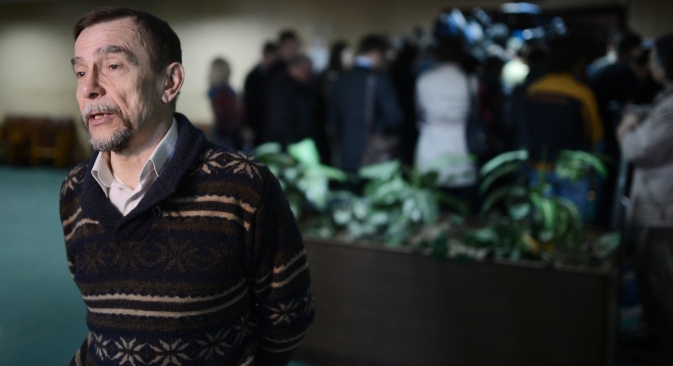 Lev Ponomarev from the For Human Rights organization, attending a court hearing of Golos, a movement for the defense of voters' rights, the first NGO to be sued for failure to register as a "foreign agent." Source: RIA Novosti / Vladimir Astapkovich

While the Russian authorities sum up the results of their large-scale inspections of NGOs, pundits make their guesses as to whether it is possible to reach a compromise on this issue.

The large-scale inspections of nongovernmental organizations (NGOs) have puzzled both experts and NGO representatives. While the authorities are preparing to sum up the results of its search for “foreign agents,” political pundits are trying to figure out how the inspections will affect Russia’s human rights record and whether the government and NGOs will be able to come up with a compromise.

According to Dmitry Kolbasin, a spokesperson for the human rights association Agora, human rights activists have registered "267 inspections of NGOs from 56 regions of Russia carried out by prosecutors."

"Russian NGOs are now receiving warnings and orders from prosecutors about alleged violations of the laws on NGOs, 'foreign agents' and extremism prevention, complaints about the charters and internal business correspondence, unregistered symbols and problems with documents, incorrect protocols of board meetings, and the absence of fire alarm logbooks," Kolbasin told Interfax on April 29.

Shortly after the inspections, Russia’s law enforcement officials invited representatives of some Moscow-based NGOs (including Human Rights Watch and Amnesty International) to the prosecutor’s office to question them on May 6, according to the Twitter page of the head of the Agora human rights association, Pavel Chikov.

Although Russian officials claim that these inspections are not intended to limit NGO activities and are conducted in accordance with the law, Russian pundits and NGO representatives think otherwise.

If the authorities keep tracking “foreign agents” in this manner, NGOs might switch to underground activity, according to Yuri Korgunyuk, who is the co-founder of the Moscow-based think-tank INDEM.

The INDEM think-tank, which identified itself as a nongovernmental organization, was established in the 1990s. Since that time, it has been funded by different sources – both domestic and foreign. However, in the middle of the 2000s, it primarily relied on foreign grants.

“We can’t get [available] grants from inside Russia,” Korgunyuk says. “And now we might find opportunities to get foreign funding. Now we are conducting research on political parties in Russia from the Moscow-based office. Well, if we are closed, we will study politics from [our] homes, and, finally, we may take to the streets again, on Bolotnaya.”

“If the inspection continues to be conducted in the same manner, the situation with NGOs may be significantly changed,” says Chizhov. “NGOs may face a lot of problems.”

Meanwhile, Korgunyuk is hesitant to predict future scenarios for how Russia’s NGOs will adjust to new legislation and regular inspections.

“Actually, there have never been financially independent NGOs in Russia,” the expert says. “I am not sure whether it is possible to reach [financial independence]. Usually, funding comes from government, business and foreign agencies.”

Yet, currently, the INDEM think-tank pins its hopes on different organizations outside Russia, because of the lack of governmental grants.

“The authorities will support you if you flatter them and follow their policy,” Korgunyuk says. “Otherwise, you won’t get the grant from the government. Those NGOs that criticize are usually labeled as ‘rebels,’ and they are hardly likely to get any request for research from the authorities or business. The only source is foreign funding.”

Korgunyuk regards the recent NGO inspections and the NGO law as unconstitutional. When asked about a compromise between the government and NGOs, Korgunyuk said that it should be based on the Constitution and the rule of law.

Chizhov argues that a compromise is possible if NGOs admit that they are “foreign agents” and the definition of “foreign agent” takes on a positive, “innocent” connotation in the Russian language (currently, the phrase is widely understood to mean “spy” in Russian). However, achieving this goal in Russia will be challenging, which leaves the future of NGOs in limbo.

According to Chizhov, the worst case scenario is that a number of organizations may be closed, given predictions that the definition of “political activity” may be expanded. For example, tracking down vote fraud during elections, as well as supporting amendments to election law, may be regarded as political activity.

“Thus, any attempts to resolve or discuss social-political questions may fit into the definition of political activity in the near future,” says Chizhov. “And this may seriously complicate the work of some NGOs.”