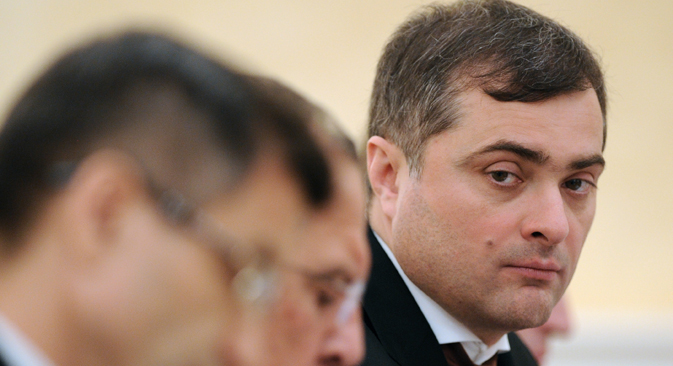 The Kremlin’s press service said that Surkov had left at his own request. Source: ITAR-TASS

The longtime architect of Kremlin ideology, Vladislav Surkov, leaves the government after the president gives ministers a harsh dressing-down.

President Vladimir Putin has accepted the resignation of his long-time ally and former chief ideologue Vladislav Surkov from his posts as Deputy Prime Minister and government chief of staff, the Kremlin’s press service said in a brief statement Wednesday afternoon.

The statement said that Surkov had left at his own request, without giving further details. Surkov, 48, had served as deputy head of the Presidential Executive Office from August 1999 through December 2011, when he was appointed Deputy Prime Minister.

Surkov’s resignation came a day after Putin gave Prime Minister Dmitry Medvedev’s Cabinet a scathing dressing-down for falling behind with implementing a set of his keynote decrees signed shortly after he took office as president on May 7 last year.

Commenting on Putin’s criticisms, Surkov said the Cabinet has been working “quite flawlessly,” admitting however that progress on 50 out of 151 executive orders to be implemented by the end of this year had been “unsatisfactory.”

Surkov told the Kommersant daily he had handed in his resignation on April 26, declining to comment on the reasons. “I’ll tell that later, when it’s appropriate,” Surkov was quoted as saying.

Putin’s spokesman, Dmitry Peskov, told RIA Novosti news agency that Surkov’s dismissal had to do with the implementation of the decrees discussed Tuesday at the Cabinet meeting.

Commenting on his plans in an interview with the Russky Pioner magazine, Surkov said that he is working on “a political comedy based on real events.”

Surkov has recently found himself in the middle of a brewing scandal that has cast a shadow over a major modernization project initiated by Medvedev, the Skolkovo research hub near Moscow. On April 19, the Investigative Committee announced it was starting a probe into alleged misappropriation of state budget funds at Skolkovo.

Surkov publicly defended the Skolkovo project as “one of the most transparent ones” as he spoke at London School of Economics last Wednesday.

Surkov came under fire earlier this week as the spokesman for Russia’s Investigative Committee, Vladimir Markin, lashed out at him in an Op-Ed article in the Izvestia daily for his remarks, alluding that Surkov was trying to sabotage the investigation by presenting it as unjustified persecution in front of his “target audience” in London.

Surkov stated he does not comment on “graphomania,” the compulsive urge to write.

Surkov is known as one of the main people behind the idea of Russia’s “sovereign democracy.” In July 2011, he stated that Vladimir Putin was sent to Russia by God when the country was going through hard times.

However, relations between Putin and Surkov have been cooling off somewhat in recent years, and at the end of 2011 he was replaced with a zealous United Russia official, Vyacheslav Volodin, as deputy head of the Kremlin’s Executive Office in charge of ideology.

“Surkov was a political heavyweight, adding up to the political weight of the Cabinet as a whole,” an expert with the Center for Political Trends, Alexey Zudin, told RIA Novosti news agency. “The resignation of a figure like that is weakening the government politically.”

“In Medvedev’s Cabinet, Surkov was charged with very specific responsibilities that he clearly wasn’t enthusiastic about, and he had arranged, provoked his own dismissal,” the head of the Center of Political Information Alexey Mukhin told Vesti FM radio.

As Deputy Prime Minister, Surkov supervised the implementation of the government’s decisions, innovative projects, culture, mass media and other sectors.

“In the past decade, Vladislav Yuryevich [Surkov] got used to working in a comfortable environment, protected by the top bosses from external threats, moreover, he created threats for others, but it came to an end and I guess he just blew his lid,” Alexey Venediktov, the editor-in-chief of Ekho Moskvy radio, wrote in his blog.