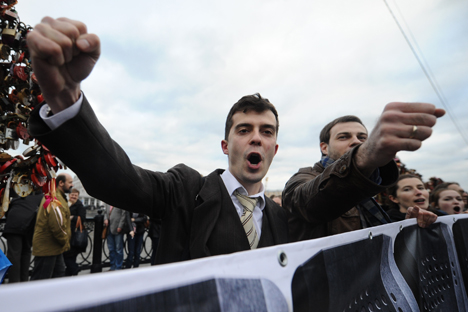 Some experts suppose that many in the opposition have recently lost interest in the organisation. Source: ITAR-TASS

The most vocal opponents of the Russian president have not been able to gather the kind of mass support that they had hoped for since they started protesting last year’s election.

The Russian opposition held a rally on May 6 to mark the anniversary of last year’s mass protests at Bolotnaya Square that degenerated into violent clashes with the police. According to the police, around 8000 people showed up to the rally. The organisers of the rally have a much more optimistic estimate, claiming that some 30,000 protesters gathered at Bolotnaya Square near the Kremlin. Opinions on the exact place in the political landscape that opponents of the regime have been able to stake a claim to a year after the mass protests vary just as widely.

The Opposition Coordination Council – a structure that emerged last September – organised the rally. Its members have been elected through online polls.

It is the Coordination Council (CC) that its members see as representing the Russian opposition as a whole. And it is the CC that was supposed to engage in a dialogue with the government on behalf of the opposition.

Vladimir Putin said during a live call-in TV event at the end of April that he was ready for a dialogue with the opposition, “but some opposition figures are evading this dialogue,” Putin noted.

In an earlier interview with state-owned TV channel Rossia-24, the President’s press secretary Dmitry Peskov said that he didn’t think a dialogue with the Russian opposition was possible, because, according to him, “it’s not possible to talk with emptiness.”

In his opinion, the regime’s opponents have failed to come up with a constructive agenda or true leaders. In the six months since its inception, the members of the CC have been mainly busy holding regular meetings to discuss organisational matters and issue statements on various actions of the government. Only a narrow circle of activists has actually been participating in the CC’s activity.

According to Boris Kagarlitsky, Director of the Institute of Globalization and Social Movements, the establishment of the CC has become a symbol of an impasse in which the protest movement that emerged on the wave of the 2011 parliamentary elections found itself. “The leaders of the protests were aware that they were beginning to lose supporters and that they were unable to set new objectives. That’s where the Coordination Council election campaign came in,” Kagarlitsky said.

The CC’s inability to set clear-cut objectives has led to some prominent opposition figures drifting away from it. The ‘star’ of last year’s opposition rallies, CC and poet Dmitry Bykov, has essentially focused on journalism and artistic activities that are only indirectly related to political struggle. Reports that another CC member, TV celebrity Ksenia Sobchak, was getting married were also perceived by many as a sign of her withdrawal from political activism of recent months to focus on her personal life.

While CC members were holding meetings, the government was actively trying to isolate some of its most active members and reduce its potential impact on society. Several opposition leaders have become suspects in criminal probes launched with regard to either their political activities or alleged economic crimes.

In particular, a court in Kirov is hearing the case of opposition leader Alexei Navalny, whom law enforcement agencies have accused of fraud. Navalny has become famous for exposing corruption in the highest ranks of the government.

Another CC member, the leftist activist Sergei Udaltsov, is under house arrest after being accused of accepting money from the Georgian special services, which was allegedly recorded by hidden cameras. Udaltsov has also been essentially deprived of participating in political activity.

Famous journalist and CC member Oleg Kashin admits that many in the opposition have recently lost interest in the organisation. However, according to Kashin, despite the ‘flickering’ nature of its activities, the CC still represents the opposition. It’s the CC that would be able to start a dialogue with the government if a domestic political crisis arises, he believes.

Kashin believes that Navalny remains the best person to lead such a dialogue on behalf of the regime’s opponents. “Unfortunately, it has become clear in recent months that he sees the role of a real political leader as a burden. Perhaps the Kirov trial will galvanize him” Kashin said.