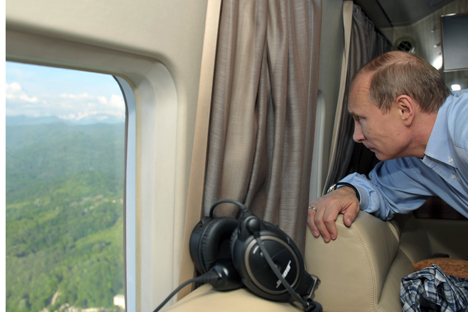 President Vladimir Putin will use helicopter on the occasion. Source: ITAR-TASS

The helicopter landing pad for Presindent Vladimir Putin has been built on the premises of the Moscow Kremlin. According to the press secretary, the new facility will not cause any damage to historical buildings.

The president's press secretary Dmitry Peskov announced on Thursday that an helicopter landing pad has been built on the premises of the Moscow Kremlin and President Vladimir Putin will use it at the first opportunity.

"The helipad has already been constructed in the Kremlin. It has even been tested," Peskov said.

Asked when the president would start to use the helipad, the press secretary said that "it will depend on the occasion." This week the president will be in Sochi, and he has several business trips scheduled for the near future.

Peskov added that the Russian president only uses Mil Mi-8 helicopters. According to the press secretary, the new facility will cause absolutely no damage to the historical buildings of the Kremlin.

"All the possible effects on the architecture were calculated before the site for this helipad in the Kremlin was chosen. It was confirmed that even the use of heavy hardware, such as a Mi-8 helicopter, would not cause any damage," he said.

Prime Minister Dmitry Medvedev has been taking advantage of the presence of an helicopter pad near the White House - at the end of March he left the Government House in a helicopter.

The head of Ryazan limited the use of service cars by members of the administrative staff. He told that if officials walked around the city more often, they would see more deficiencies and could effectively manage problems.

The head of Voronezh goes further – rejecting not only transport, but also his salary, which he will divert to a regional museum's fund.

The article is based in materials from Interfax and RIA Novosti.