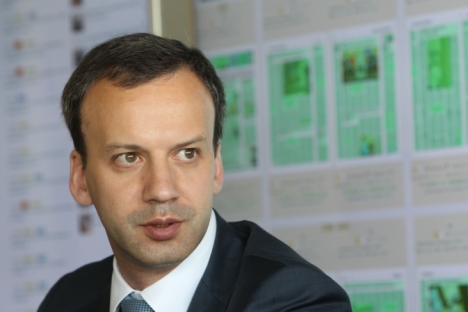 Arkady Dvorkovich: "Foreign companies would only be able to work on the Russian shelf as minority partners." Source: Rossiyskaya Gazeta

Russian Deputy Prime Minister, Arkady Dvorkovich, speaks to Russia Beyond The Headlines about the problems of the Russian economy, access to the Russian shelf for foreign companies and the upcoming St. Petersburg International Economic Forum.

Russia Beyond The Headlines: What do you think about growing criticism toward Russia's current government?

Arkady Dvorkovich: Only those who do nothing receive no criticism.

Who is Mr. Dvorkovich?

Other countries' governments also get criticized because, in searching for a growth model amid budget austerity, they are often forced to take difficult and sometimes controversial decisions. The task I have set for myself for my first year in the current post involves creating a stable regulatory environment for those industries that I am in charge of [Dvorkovich supervises fuel and energy, communications, transport, agriculture, and several other sectors].

Some aspects of this work have yet to be addressed, including in subsoil licensing, in environmental regulation, and also in the fiscal environment for the oil and gas sector. Oil and gas companies will not risk major investments unless they understand what the rules of the game will be for the next several years.

RBTH: Do you as deputy prime minister find it difficult to interact with the heads of private businesses, each of whom has their own goals to pursue? Especially the likes of Rosneft president and chairman Igor Sechin, who holds a most prominent position in the Russian fuel and energy sector and whose views are diametrically opposite to yours?

A.D.: I do not think that the U.S. energy secretary finds it easy to interact with the domestic energy giants, which enjoy no lesser lobbying support and protect their own interests. My mission is to make sure the industry is operational. There are certain contentious issues related to the development of the Russian shelf. The government has decided to give most of the development licenses to Rosneft and Gazprom.

It is however still unclear what will happen to those blocks rejected by either giant due to lack of interest: Should we hand them out to private companies or keep them in the non-licensed stock as a strategic reserve to be passed on to future generations? We have a lot of discussions on this topic, which is normal. On the other hand, [Sechin] and I agree on many issues. For example, when it comes to China-related matters we come out as a single front.

RBTH: If the government does give shelf access to Russian privately-owned businesses, will this make it easier for foreign companies to access the shelf reserves?

A.D.: Even in that case foreign companies would only be able to work on the Russian shelf as minority partners.

RBTH: In your 2011 interview with Larry King you said there was too much state intervention in Russia's economy, which left very little room for private business. Has the situation changed in the two years that have passed?

A.D.: It has, to a degree. We are successfully implementing the program to have government-controlled assets privatized by 2018. We sold 7.58 percent of Sberbank [Russia's largest bank] for $5.2 billion last September. This year the process of state withdrawal from major businesses is set to continue.

VTB Bank, Russian Railways, Alrosa [a diamond company]  and Sovcomflot [a shipping company] are preparing for IPOs. No exact dates have been set since these businesses will be sold with due regard for the market situation. In short, we view privatization as a means toward increasing [a company's] competitiveness and efficiency.

Our second most important goal here is to replenish the budget: The money raised [through privatization] will be used to finance long-term investment programs.

RBTH: The Russian government in the past few years has been repeatedly stressing the need to diversify the economy. However, according to the Federal Customs Service, the share of non-primary goods in overall exports shrank 4 percent last year. Why?

A.D.: Although oil and natural gas historically account for a high proportion of Russia's exports, the sector is growing at a much slower pace than elsewhere across the industry. We observe a rapid growth in processing; our IT sector has been growing at 15 to 20 percent annually over the past decade.

The monetary value of our oil exports has indeed risen, but this is because the crude prices are rising. If crude sold for $70-80 a barrel, and not its current price of $105-110, then the balance would tip toward non-primary exports. But you have to agree it is a good thing that the oil prices are not falling [laughs].

RBTH: When will Russia be able to overcome its dependence on energy exports?

A.D.: For this to happen we must first get rid of the inefficient economic sectors and build new, efficient production facilities. This is a lengthy process, but we are trying to create an environment that would facilitate business development and help attract investment. We offer tax rebates to individual sectors, such as IT, and to production facilities situated in special economic zones; we create the necessary infrastructure at science parks.

Five years ago there was virtually zero interest in innovation in Russia; now there are hundreds of start-up projects operating in this country. We have set up the Skolkovo innovation center, which is attracting foreign companies to our country; some of these companies have already launched operations not just in Moscow but in Novosibirsk, St. Petersburg, Rostov, Kazan and other Russian cities.

RBTH: What is stopping foreigners from investing in Russia?

A.D.: Investing in Russia is not always competitive when compared to investing in other countries, for a number of reasons. The president and prime minister have instructed us to change this. In particular, Russia has to make it to the top 20 on the World Bank's Doing Business ranking by 2018.

We are progressing in that direction; for example, we have considerably simplified the business registration process. In just one year Russia has risen from 120th to 112th in the Doing Business rankings, and in separate aspects our progress has been even more impressive.

RBTH: Is there something that makes up for Russia's shortcomings in the eyes of foreign companies?

A.D.: We have a huge market of 150 million people; if we add the populations of neighboring countries we are talking 250 to 300 million in total. This market attracts consumer goods manufacturers. Look at how automotive production is booming in Russia. World-leading car makers such as Ford, Toyota and Volkswagen began opening assembly lines here six or seven years ago; now they are launching a second wave of localization by building component factories.

As of March 2013, the Russian Ministry of Economic Development had signed 31 industrial assembly agreements with a number of leading international car makers which together account for over 90 percent of all vehicles manufactured globally. In other sectors however things are happening not as fast as we would like.

RBTH: The St. Petersburg International Economic Forum, the largest event of its type in Russia and Eastern Europe, will take place in June. The 2010 forum saw the signing of contracts for a whopping total of $19.5 billion. Do you think this year's event will beat that record?

A.D.: The St. Petersburg forum is indeed one of the largest in Russia. In my view however, it is not intended for record-setting purposes. It is a platform for interaction that brings together the heads of Russian and international companies.

The most important developments usually take place on the forum sidelines, during talks on specific projects and investment programs. A contract does not necessarily have to be signed at the venue, it may materialize a month or even half a year after the forum. This year, we will be hosting top-ranking delegations from Germany and the Netherlands: Russia is having cross years with these two countries. I think the forum will be pretty intense.

RBTH: Has the forum's agenda been finalized yet?

A.D.: We will be generally discussing the prospects of the global economy. In fact, the St. Petersburg forum always pursues two goals. These are, first, filling our partners in on which decisions we have taken or are planning to take in the near future, so they know what to expect; and second, it is providing a venue for discussions and talks.