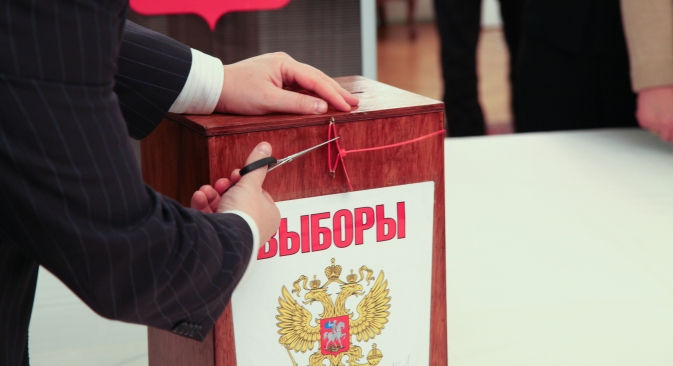 It remains to be seen how the proposed amendments to the administrative legal proceedings will affect the electoral process in Russia. Source: Kommersant

The State Duma’s recent stance on restricting the political rights of parties and citizens resulted in a controversial response from politicians and experts.

Following the Russian State Duma’s support for a new code of administrative legal proceedings that will regulate disputes between citizens, political parties and government – and, particularly, deal with complaints about election results – Russian pundits and politicians expressed their opinions on the stance.

While some see this move as unconstitutional and “shallow,” others argue it will help to make Russia’s election system more professional and balanced.

On May 21, the Russian parliament supported President Vladimir Putin’s project for the new administrative code proposed last March. Putin mentioned this initiative in December 2012, in an address to the Federal Assembly where he proposed amending the current Civil Code.

The need to create such legislation stems from the lack of equal relations between parties [government, political parties and citizens], and the amendments are expected to help “equalize this misbalance,” Garry Minkh, the presidential representative in the State Duma, told Kommersant Daily.

Nevertheless, the proposed legislation contains controversial amendments that may restrict the rights of both political parties and citizens in appealing against vote fraud and other falsifications during elections. For one, it will reduce the time-limit for appeals from political parties; in addition, it will prevent ordinary citizens from issuing complaints about elections results.

Russian politicians and pundits are divided in their assessments of the legislation.

Dmitry Orlov, a member of the United Russia political party, greets the new legislation as an attempt to “professionalize [the] election process” and minimize “the amount of groundless requests” to appeal against the Central Election Commission.

“At first glance, this code looks reasonable,” said Orlov. “Sometimes ordinary people can’t present well-grounded and detailed requests [for court appeal]. On the other hand, reducing the limits for complaints might encourage parties to collect all documents without delay.”

In contrast, the Communist Party’s Vadim Solovyov opposes the amendments and regards them as unconstitutional. In his opinion, prohibiting members of the public from appealing against election fraud violates the Russian Constitution and the country’s Civil Code.

“This decision is illegitimate,” said Solovyov. “Political motives lie behind this stance. It means that the government imposes more restrictions on Russia’s election legislation, which limits democratic freedoms during the elections.”

The Communist Party member argues that reducing time-limits for court appeals will increase the bureaucratic burden on political parties and decrease their chances of filing all necessary documents on time.

“Certainly, it may be regarded as a tough restriction,” Solovyov said. “Actually, the legislation will serve the interests of the United Russia ruling party.”

Likewise, Yuri Korgunyuk from the Moscow-based INDEM think-tank believes that the proposed administrative legislation will help authorities expand their opportunities to overturn appeals from the people.

He views the amendments as “pseudo-judicial” and “shallow,” especially against the backdrop of recent political events such as the NGO inspections and a worsening human rights record.

“Putin has followed this [restrictive] course since he came to power,” said Korgunyuk. “Previously, the Russian courts dragged their feet about approving appeals [that came from citizens]. And this legislation is not a big deal, as matter of fact. It might have caused anxiety when Putin took office, but now it’s too shallow and brings no surprise.”

Georgy Chizhov from the Center for Political Technologies describes the amendments as “symbolic” and “pre-emptive.”

“The authorities are giving a sign to opposition parties that they won’t pin many hopes on victory during the next elections,” said Chizhov.

At the same time, Chizhov sees the prohibition against civilians filing appeals as “dubious,” because it puts into questions people’s rights to fair elections.