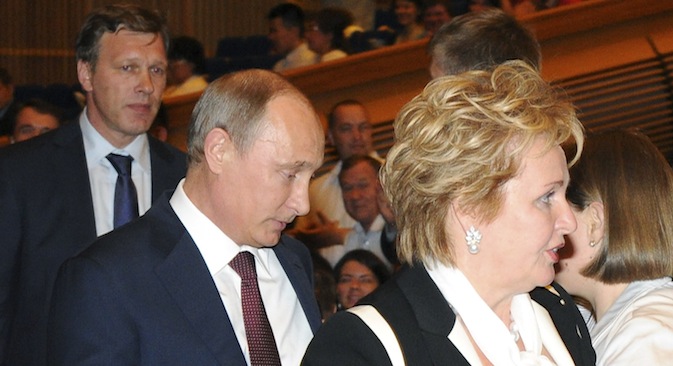 Russian President Vladimir Putin and his wife, Lyudmila, announced Thursday on nationwide television that their marriage is over, ending years of media speculation about the couple’s relationship.

“Yes, you could say this is a civilized divorce,” Lyudmila said in response to a journalist’s question, following the Putins’ joint outing to a ballet performance – the first time they had been seen in public since the president’s inauguration in May 2012.

Both Putins said the reason for their split was the president’s work, which consumes most of his time and requires a very public lifestyle.

“All my activity, all [my] work is connected to being in the public eye,” the president said. “Some people like this, some don’t, but there are people who are completely incompatible with this,” he said, adding that Lyudmila had borne the burden of being a first lady for nine years.

“This really was our mutual decision,” Lyudmila added. “I really do dislike life in the public eye and air travel is very difficult for me. And we hardly see each other.”

In the interview, which was broadcast on state television and clearly did not catch the couple off guard, both were amicable, smiled often and referred to each other with the polite Russian form of address, using both names and patronymics.

The Putins pointed out that their two daughters are grown up, but that the family remains close.

“Lyudmila Alexandrovna and I will always remain very close, I’m sure of it, forever,” said the president.

The announcement put an end to years of speculation about the strength of the Putins’ marriage, fueled by the first lady’s increasingly rare appearances in public over the past five years.

Presidential spokesman Dmitry Peskov said no official divorce had been drawn up yet, and he did not know when it would be, but he attached little importance to the formality.

The Putins have been married for just under 30 years.