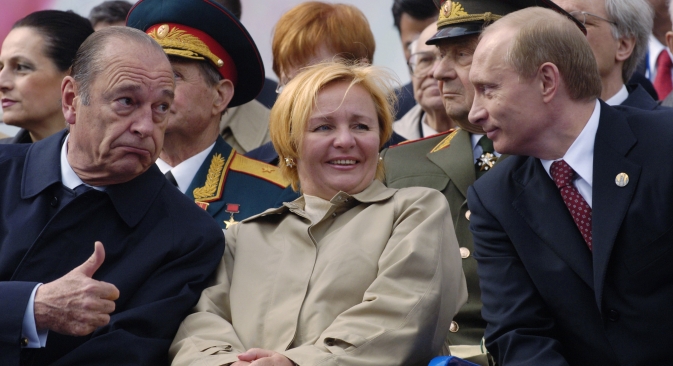 The president is commended by many experts for his frankness about his private life, while Putin’s spokesman dismisses speculation about a future remarriage as "prattling."

The decision by Vladimir Putin and his wife, Lyudmila, to divorce after nearly 30 years of marriage has been largely taken as a gallant and honorable step by Russian experts and media commentators.

Gallery: Vladimir and Lyudmila: 30-year marriage came to an end

“Putin oftentimes appeared alone lately where he was expected to appear with his spouse by protocol, and every time it added fuel to the flames of conjecture. Now there’s little to conjecture, if anything,” Victor Loshak, a former editor-in-chief of Ogonyok political magazine, told Kommersant FM.

“We want to know more about politicians, especially the president, and now we’re turning a new page,” Loshak said. “Many must be relieved that the president did this, instead of leading a double life for the sake of observing the artificial protocol.”

Russian President Vladimir Putin and his wife Lyudmila, walk preceded by their Labrador, Koney, at Putin's residence in the Russian Black Sea resort of Sochi, in this Sept. 14 , 2003 photo. Source: AP

“It’s incredible news, and everything else pales in comparison,” Andrei Kolesnikov, a long-standing Kremlin pool correspondent and the author of a series of books about Putin, told Business FM radio. “Maybe this isn’t the last act of this drama, and it undoubtedly is a drama.”

Putin’s spokesman, Dmitry Peskov, dismissed media speculation that Putin might be leaving his wife to marry another woman.

“No, it’s false,” Peskov told Ekho Moskvy radio when asked if the rumor was true. “It was a mutual decision, everything else is gossip. Take a look at Putin’s schedule and you’ll see that his life, sadly perhaps, is about the responsibilities he bears as the head of state.”

Peskov refused to comment on the possibility of Putin’s marrying again.

“I don’t think an answer like that is within the purview of the press secretary, but I can assure you that it’s just rumor and prattling,” he said.

Evgeny Minchenko, the head of Minchenko Consulting, a political think tank, said the divorce was Putin’s personal business and would not tarnish his reputation.

“Russia is a secular state with a high tolerance level. Divorces are not uncommon, many people had to go through this,” Minchenko told RIA Novosti news agency. “It may bring the president closer to the people, as many may think, ‘This can even happen to the president.’”

“Putin bit the bullet. It must have been a very difficult decision to make, because he is a sort of politician for whom private life has been a closed topic,” he said.

Slatinov said he didn’t expect the split would have any significant influence on Putin’s ratings.

“Some will probably be disappointed, while others will appreciate his honesty and dignity,” he said.

The head of the Center for Political Information, Alexei Mukhin, said that it was important that the divorce was civilized, adding that women may now take a greater interest in Putin as a politician, which may push his ratings up.

Putin and his wife announce divorce

“I remember the hype surrounding Prokhorov when he stood for president,” Mukhin told RIA Novosti.

Billionaire Mikhail Prokhorov, 48, is one of the country’s richest bachelors, with a fortune estimated by Forbes at $13 billion.

“Prokhorov definitely used this factor in his campaign,” Mukhin said, referring to the billionaire’s single status.

Dmitry Abzalov, vice president of the Center of Strategic Communications, commented that the world was becoming more open, and that voters value frankness more than before.

“In contemporary politics, there is a position that suggests concealing all to the last, but a strong politician should be able to act like a man, and leave without insulting his spouse and children, in a civilized, serious and open manner,” Abzalov said.

Russia's Prime Minister Vladimir Putin (R) and his wife Lyudmila (coffee) talk to a census-taker as they participate in a nationwide population count at the Novo-Ogaryovo residence outside Moscow October 16, 2010. Sourec: Reuters

In his opinion, a politician’s private life is usually an insignificant factor in their approval rating. “It will affect Putin’s ratings least of all,” Abzalov said.

While Putin’s marriage was secular – in Russia Orthodox Christians can marry in church after registering their marriage with the registry office – the Orthodox Church is generally cool toward divorce. But the head of the Association of Orthodox Experts, Kirill Frolov, says that Patriarch Kirill, the head of the church, will “empathize with the decision of the couple.”

“I believe that only the Holy Patriarch has the right to pass judgment about today’s sad news,” Frolov wrote in his blog on LiveJournal. “I am confident that his judgment will be full of compassion, love, justice and moral feeling.”

Frolov also called on Christians to pray and to “prevent anti-Russian forces from gloating and sitting in judgment.”