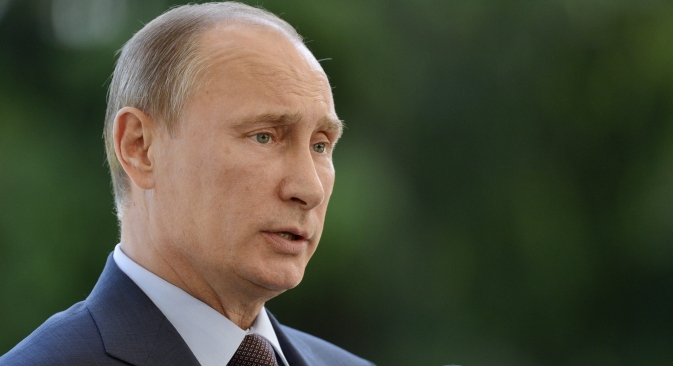 Vladimir Putin: "He [Edward Snowden] is in the transit zone as a transit passenger and remains there still." Source: AP

Russian President Vladimir Putin says that Snowden is still in Moscow's Sheremetyevo airport and, at the same time, expresses hopes that this case will not affect U.S.-Russia relations.

President Vladimir Putin has said that former CIA employee Edward Snowden still remains in the transit zone of Moscow's Sheremetyevo airport and dismissed as absurd all accusations of Russia in relation to his arrival in the Russian capital.

"He is in the transit zone as a transit passenger and remains there still," Putin said.

"I hope this won't affect the businesslike nature of our relations with the United States. I hope our partners will understand this," he said. "Mr. Snowden is a free man. The faster he chooses his ultimate destination, the better for us and for him."

"Our special services have never worked with Mr. Snowden and are not working with him today," Putin added.

Russia may turn in criminals or suspects only to countries with which it has a relevant bilateral agreement, and there is no such an agreement between Russia and the United States, Putin said apparently in light of the U.S. efforts to secure Snowden's extradition.

"Thank God, Mr. Snowden have not committed any crimes on the Russian Federation territory," Putin added.

"As well as Snowden, he considers himself a human rights defender and is fighting for circulation of information. Ask yourself: should such people be extradited to be jailed or not? In any case, I would prefer not to deal with such issues, because this is just the same as shaving a piglet: too much noise but too little hair," Putin said. "Let Mr. Mueller [FBI Director Robert Mueller] and Mr. Bortnikov [Russian Federal Security Service Director Alexander Bortnikov] deal with this issue."