Lifestyle
Igor Rozin
based on The Moscow Times 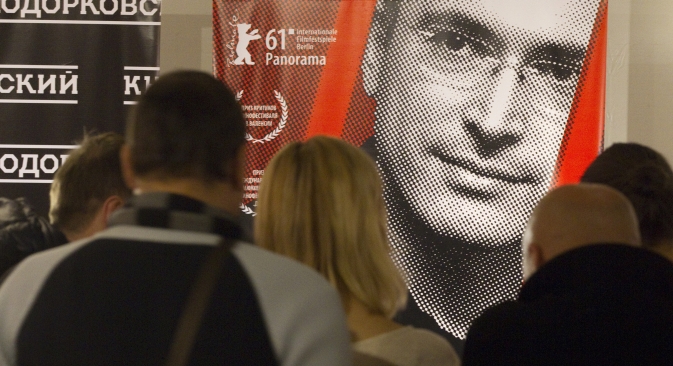 As Khodorkovsky spent his 50th birthday in prison, one state-controlled TV channel accused him of involvement in yet another crime.

While Russia’s former Yukos head Mikhail Khodorkovsky spent his 50th birthday in prison, NTV channel broadcast a documentary that accused the Yukos founders of being involved in the murder of a public official.  Meanwhile, Moscow police had to detain more than 40 activists who tried to organize an authorized rally in support of Khodorkovsky in central Moscow.

According to the opposition-leaning Novaya Gazeta daily, nearly 200 people tried to organize an unsanctioned protest in support of Khodorkovsky in central Moscow. Several small protests were held all across Russia, in a show of support for the jailed tycoon.

Meanwhile, the state-controlled NTV channel aired a documentary, "Murder for a Present,"  accusing Yukos founders—including Mikhail Khodorkovsky—of being involved in the 1998 murder of Nefteyugansk’s mayor, Vladimir Petukhov, in western Siberia.

Remarkably, the accusations came from investigators on Khodorkovsky’s birthday. While the imprisoned tycoon denies his involvement in the murder, pundits see the film as an attempt to launch a campaign and the set the scene for a third criminal case against Khodorkovsky and his business partner, Platon Lebedev.

Both Khodorkovsky and Lebedev are expected to be freed by the court by 2014, but Russia’s Investigative Committee is now reviewing an expert report analyzing the second Yukos case. Investigators say the experts were paid by Yukos to conduct their research.

The story of Khodorkovsky

As one of Russia’s most prominent tycoons and the former owner of the defunct oil giant Yukos, Mikhail Khodorkovsky celebrated his 50th birthday on Wednesday behind bars. He has spent nearly 10 years in prison on charges of fraud, embezzlement and tax evasion, which is seen by many observers as President Vladimir Putin's revenge for the businessman's deep engagement in politics.

After 10 years in prison, Khodorkovsky has become a sort of icon for liberal politicians and opposition campaigners. He is expected to be freed next October, if he does not face new criminal charges.

When he was arrested, Khodorkovsky was seen as Russia’s richest man and one of the country's seven most influential businessmen. In addition to business, he was engaged in financially propping up Communists and the liberal political opposition, as some Russian media outlets have reported.

According to a poll released on June 25 by the independent Levada Center, one-third of Russians support parole for Khodorkovsky—twice the number of those who want him to remain in prison. The poll was conducted among 1,600 people in 45 Russian regions, with a margin of error of 3.4 percent.

The head of the For Human Rights movement, Lev Ponomaryov, described Khodorkovsky as “a person in the spotlight of social and political life in Russia,” saying by telephone that the jailed tycoon is “indisputably a leader.”

“This is a unique example of when a person who is behind bars continues to have an impact on the political environment in the country,” said the human rights activist.

Meanwhile, Sergei Mitrokhin, leader of the liberal opposition Yabloko party (which Khodorkovsky sponsored in 2003), claims Khodorkovsky was imprisoned because he “dared to challenge Putin.”

Before of his birthday, the New Times opposition magazine interviewed Khodorkovsky. In the interview, he revealed the secrets of his life in prison, his family and politics.

“I could hardly imagine the possibility of being released because I have gotten used to prison,” said the former Yukos head.

While speaking about politics, Khodorkovsky criticized both the Kremlin and Russia’s opposition movement: He accused the former of corruption, limiting freedom of expression and economic freedom; the latter was faulted for “replacing actions with words” and lacking “sincerity and honesty.”

Before his detention in October 2003, Khodorkovsky made no bones about the alleged corruption in the state-run oil giant Rosneft. In April of that year, the tycoon revealed his plans to finance the liberal opposition parties Yabloko and Union of Right Forces (now defunct) before the December 2003 parliamentary elections.

This article is based on materials from The Moscow Times.