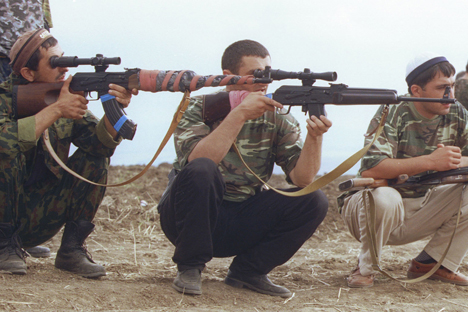 Experts suppose that underground gangs can exist only if they have massive support among the peaceful citizens. Source: PhotoXPress

The head of Dagestan Ramazan Abdulatipov urges citizens to “learn to forgive one another.”

The acting head of Dagestan, Ramazan Abdulatipov, announced on television that the republic’s authorities were considering granting amnesty to militants prepared to renounce terrorism and return to civilian life.

Ramazan Abdulatipov’s statement was a reaction to an open letter from journalist Marina Akhmedova that was published last week.

The letter appealed for amnesty for those insurgents who are prepared to come out and return to a peaceful way of life.

Akhmedova, a Russky Reporter special correspondent, wrote in her letter to Ramazan Abdulatipov: “Given the situation in the region, it is, indeed, easier to destroy the hard-liners. But mercy is the main sign of strength. And, like strength, it must be demonstrated.”

Ramazan Abdulatipov stated on Russian Channel One that he had read the letter and was ready to take measures.

“I called back and said, ‘prepare competent proposals.’ We must learn to forgive one another,” he said.

The issue of amnesty for underground gangs has been raised by Dagestan’s previous leadership, as well.

For instance, a commission to assist in assimilating former militants was set up in 2010, though the amnesty did not materialize.

Now, however, the conditions are in place for this, believes the director of the North Caucasus Islamic Studies Center, Ruslan Gereyev.

“We are talking about aiding and abetting. About the people who provided food, medicines, did recruiting work but who have no blood on their hands. I think our society is ready, and the political set-up in Dagestan is such that normal ideological work in this direction might begin. As for terrorism proper, it is more the prerogative of the federal center. The constituent entities of the Federation have no say on such matters. The percentage of radicalized youth may be high, but only 3-4 percent carry arms,” said Gereyev.

Yana Amelina, head of the Caucasus Studies Sector at the Russian Institute for Strategic Studies, is convinced that the government should not be soft on the militants: “No guerillas, no ‘forest brothers’ can exist if they do not have massive support among the so-called peaceful population. People must also understand and know that, if they let a thug into their home, they will be punished as accomplices.”

“Of course, one can only get the better of bandits of any kind not by alleviating their lot but by cracking down on them, so the screws must be tightened, not loosened. And, of course, it is necessary to step up the ideological struggle — religious and political — to prevent the underground from being joined by new people. Yet those who have made their choice must answer for it. We are not talking about 10- to 14-year-olds; we are talking about grown-ups,” Amelina said.

An amnesty for armed insurgents has already been carried out in the neighboring territory of Chechnya.