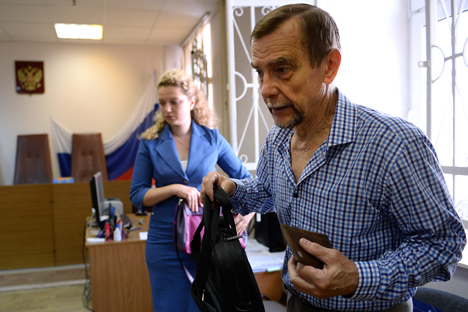 Lev Ponomaryov and his lawyer Valentina Bokareva at Moscow's Zamoskvoretsky District Court where his appeal against a prosecutor's inspection of his organization is considered. Source: Ramil Sitdikov / RIA Novosti

The Movement For Human Rights is among dozens of organizations teetering on the brink of a shutdown for protesting new legislation on NGOs and the first one that authorities have evicted by force.

Lev Ponomarev, a 71-year-old human rights activist, is going through a hard time — the work of the Movement For Human Rights, which he founded in 1997, has been paralyzed after he and his staff were battered and kicked out of their office in central Moscow by a special task police unit on the night of June 21-22.

On June 26, the Justice Ministry suspended operations of another NGO, an independent election watchdog Golos, for six months. Golos was the first NGO to have refused to acknowledge itself as “a foreign agent,” a synonym for “a spy” in Russian, and it was fined 400,000 rubles ($12,200) in April.

Late last year, Russian parliament resolved that an NGO funded from abroad and engaged in politics should have “foreign agent” added to its name, exposing the NGO to unscheduled audits and likely resulting in a fall in private donations; potential benefactors may feel wary about sponsoring an NGO that is implicitly referred to as a spy.

Ponomarev has been struggling to challenge intensified inspections of his organization by prosecutors, who claim that, under a law effective as of January 1, 2013, the Movement For Human Rights is to be labeled “a foreign agent.”

On Friday, June 28, when the Justice Ministry reported placing the first NGO on the list of foreign agents, Ponomarev walked out of a hearing in a Moscow district court, accusing the judge of being biased in favor of prosecutors.

In late March, prosecutors had demanded the organization’s paperwork, which Ponomarev had submitted in early March. During the court hearing, the prosecutors failed to give substantial grounds for requesting the same documents twice during the same month, and the judge adjourned the hearing until July 31.

Ponomarev is currently awaiting the results of a probe that the Interior Ministry launched into the forced eviction of his organization.

In the middle of the day on Friday, June 21, the head of the Moscow Department of Land, Alexander Rudnev, came to the office of the Movement For Human Rights — together with police, security officers and private security guards — to demand that Ponomarev and his staff immediately leave the office they had been renting from the Moscow government since 1999.

The human rights activists refused to do so: According to Russian law, a leaseholder can be displaced only on a court warrant. In their case, no pertinent court hearing ever took place at all.

As of June 21, Ponomarev’s organization was in the middle of a lease extension procedure. On February 15, the Moscow Property Department notified Ponomarev that it no longer wanted to rent out the office to his organization.

On February 27, however, Moscow Mayor Sergei Sobyanin said at a meeting with Moscow commissioner for human rights, Alexander Muzykantsky, that the decision would be revoked. Ponomarev has paid the rent for up to Aug. 1.

On June 22, twelve hours after the law-enforcers showed up at the office of the Movement For Human Rights and told the activists that they “can only exit the building, not enter it anymore,” Ponomarev and his staff were kicked out of the building by a special task police unit known as OMON.

Two persons not in uniform, who introduced themselves as simply Verigin and Gordeyev, were in charge of the eviction operation. Bloggers later identified one of these men as Gen. Alexander Birin, head of the Moscow Security Service’s Anti-Corruption Department.

“The OMON grabbed me, knocked me down and pulled me to the exit, as the two unidentified men in charge kicked me on my head and kidneys,” Ponomarev told the Presidential Council on Human Rights, which convened for an extraordinary meeting on June 26.

Apart from Ponomarev, the council’s head, Mikhail Fedotov, invited the other sides of the conflict — namely the Moscow mayor, the head of his administration’s property department, the chief of Moscow police and the prosecutor of Moscow.

“Many questions could have been cleared up by representatives of the Mayor’s Office, but they must have found it unnecessary to attend this meeting,” Fedotov said.

The meeting was attended by Vladimir Lukin and Alexander Muzykantsky — human rights commissioners for Russia and for Moscow, respectively. They had arrived at the office of the Movement For Human Rights on the evening of June 21, but they were denied entrance to the building by police.

This breached Russian law, which grants human rights commissioners unrestricted access to places where a violation of human rights has been reported.

“I stood near OMON, who wouldn’t let me in,” Lukin said. “Those who called themselves lessors didn’t show their IDs, ownership documents or a court warrant when I asked if they had any of those.

They just replied: ‘What court are you talking about? We can get it all done quick now without any papers.’ Apparently, they were waiting for Mr. Muzykantsky and me to leave. As soon as we did, the storm of the office began.”

At 2:30 a.m., the human rights activists were thrown out of their office. Ponomarev suffered multiple contusions, and one of his staff members had one of his radial bones fractured.

At the council meeting, the head of the Interior Ministry’s Department for Public Order, Lt. Gen. Yury Demidov, said a probe was launched into the incident and “no violations of law were found during preliminary investigation.”

Mayor Sobyanin, who is standing for election on Sept. 8, has made no statements regarding this situation so far. The Movement For Human Rights is looking for a new office in Moscow.

Billionaire Mikhail Prokhorov said on June 22 that he will pay the rent for the organization for 12 months.

Prokhorov himself had announced his mayoral ambitions, but his chances to challenge Sobyanin were compromised when Sobyanin called an early election on June 4.

Under a new law that came into effect on May 7, a person who — like Prokhorov — has assets abroad, cannot run for an elected office.