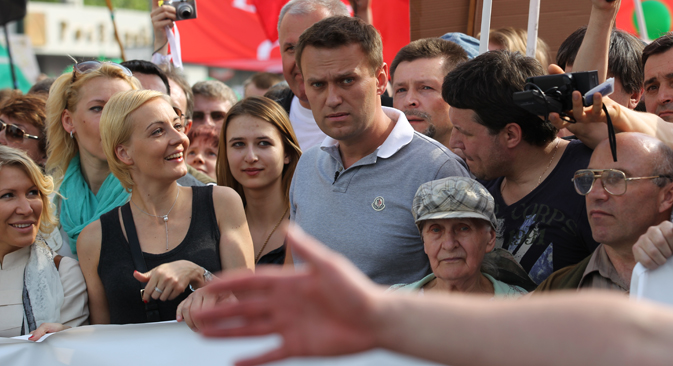 Members of United Russia are helping opposing candidates collect necessary signatures to register and run for the upcoming mayoral election in Moscow.

Representatives from the ruling party United Russia have helped several opposition candidates get registered for the mayoral election. Experts consider this to be uncommon for Russian politics and qualify this as an attempt to avoid protests.

In order to be registered as a candidate it is necessary to collect a minimum of 110 Municipal Deputy signatures. Acting Mayor of Moscow, Sergey Sobyanin, has already collected 250 signatures, but submitted only 115 to the Moscow Election Commission, although still more than required.

As a self-nominated candidate Sobyanin also submitted 80,000 signatures from average voters as well.

Besides Sobyanin only Ivan Melnikov from KPRF was able to collect the required minimum of signatures. Nikolai Levichev (from A Just Russia) received help from United Russia and collected 95 signatures.

He was closely followed by Sergey Mitrokhin (from Yabloko) with 82 signatures and Mikhail Degtyarev (from LDPR) with 78 signatures.

According to the Chief of Navalny's office, Leonid Volkov, from all the signatures offered by Moscow’s authorities, only those of independent (non-party) Municipal Deputies were accepted.

By Tuesday morning Navalny had 73 signatures collected on his own and was estimated to soon reach 85, but nevertheless he accepted some help.

Like Sobyanin, Navalny is in no need of average voters' signatures due to the fact that he was nominated on behalf of the liberal party RPR-PARNAS (Republican Party of Russia).

For a party candidate to be registered it is enough to submit only the required number of signatures from Municipal Deputies.

As Sobyanin had said a week before, Navalny's participation in the upcoming election will give Muscovites a wider range of candidates to choose from. Not all Municipal Deputies who have given their votes to Navalny support his program, but they have said that they obey party policy.

Maksim Grigoriev, Chief of the Democracy Problems Research Foundation, was very happy with Sobyanin's actions and said that this demonstrates the responsible behavior of authorities.

"This is being done in order to get a realistic picture during elections, to show real support of candidates by city-dwellers. Due to the fact that Aleksey Navalny was nominated by a rather poorly-supported RPR-PARNAS party, he does not have a lot of like-minded Municipal Deputies by his side. In my opinion it is extremely important that all political forces take part in the upcoming mayoral election to give Muscovites the ability to support those, to whose program they can relate to. In this case we will be able to attract more city-dwellers to the election, ensuring that we get a clear picture of the political situation."

The head of elite studies in the RAN Sociology Institute, Olga Kryshtanovskaya, agrees that Sobyanin's support of opposition candidates is at the same time unordinary and ambiguous.

"On the one hand, Russia is going through a democratization process and right now the issue concerning election legitimacy is very important. The authorities don't want any riots and meetings, which have to do with not admitting the election results. In order to keep the situation under control a great variety of political forces must take part in the election race."

According to the expert, the authorities’ main priority is election legitimacy. Sobyanin is quite sure of his abilities and strengths, he hardly considers Navalny to be his competitor. Victory in the upcoming election will give him the ability to methodically work and do his job in the nearby future.

Kryshtanovskaya believes that after the protest meetings following the 2011-2012 election, the authorities want to secure themselves and not to have to keep city-dwellers calm.

There is also another meaning to Sobyanin's actions. He somehow resembles a Trojan horse. The issue is that having accepted the signatures, Navalny may be reproached as to receiving handouts from authorities and not being able to collect those signatures himself. His so-called independence could be questioned, according to the sociologist.

Moscow's mayoral elections will be held on September 8th. About 40 candidates were planning on entering the race, but it is expected that only Sobyanin, Navalny and candidates from KPRF, A Just Russia, LDPR and Yabloko will actually compete.