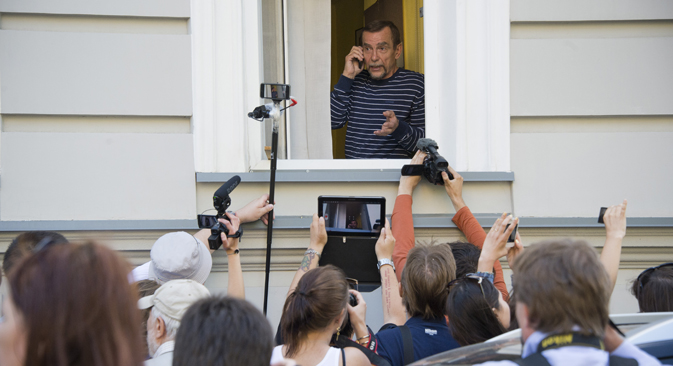 Only one organization has registered as a “foreign agent” in the past year.

The Russian Prosecutor General’s Office has conducted a large-scale inspection of nongovernmental organizations (NGOs) and discovered that more than 1,800 had received financing from abroad in the last year.

A law requiring NGOs involved in political activity and receiving money from abroad to register as foreign agents was adopted in Russia one year ago, but only one organization has registered as a ‘foreign agent’ since then, nongovernment partnership “Promotion of competition in the CIS-countries,” which aimes to improve antitrust legislation.

According to law enforcement agencies, 2,226 Russian NGOs received 30.8 billion rubles (around $940 million) from abroad between November 2012 and April 2013.

A total of 103 nongovernmental organizations were “waiting it out,” having suspended either political activities or the receipt of foreign funds.

Nevertheless, prosecutors claim that “signs of political activity” while continuing to receive foreign financing (more than 6 billion rubles) between 2010 and 2013 were detected at 215 out of the 1,000 NGOs inspected.

Twenty-two organizations fall directly under the scope of the law on foreign agents, though they have not admitted to it, Kommersant reported.

Prosecutor General Yuri Chaika said in a testimony before the Federation Council that those NGOs “were taking part in electoral processes, public events, and the drafting of bills, while thoroughly reporting their expenditures to their sponsors.”

“In violation of the 1969 Vienna Convention, seventeen organizations involved in political activity were directly financed by the embassies of the United States, Britain, Belgium, the Netherlands and Switzerland, which, according to the Ministry of Foreign Affairs, represents an interference in our country’s internal affairs and violates the generally accepted rules of international law,” said Chaika.

Prosecutors have not disclosed the names of the NGOs accused of violating the rules. However, NGOs decided to compensate for the lack of such information and started a website called Closed Society, where they publish specific accusations leveled at them by law enforcement agencies.

According to Alexander Cherkasov, chairman of the Memorial Human Rights Center, he tried to identify NGOs that were receiving the money Chaika had mentioned, but failed.

“We figured that our organization received $755,000 during the four months between the enactment of this law and the moment the prosecutor’s sensational statements were first aired. We are one of the biggest organizations, and very few others have a budget comparable to ours,” the human rights activist said.

“If we divided the billion dollars Chaika is talking about by this amount, we would expect to see a lot of such organizations. They are all open organizations and have nowhere to hide the money. We have even asked the Prosecutor General’s Office to tell us on whose accounts they discovered all this money, but they replied by saying that it was classified information,” said Cherkasov.

He noted that NGOs did not wish to admit that they were foreign agents. “An agent is someone who acts on orders from others, who carries out instructions issued by a principal. In this case, they are all autonomous organizations that have no relation whatsoever to any government missions,” Cherkasov said.

Prosecutors raided Memorial in late March and seized more than 9,000 pages of documents for examination.

The human rights activists pointed out that law enforcement agencies were asking them to stop activities related to political prisoners, because the Russian Criminal Code does not provide for any punishment based on political views.

The expert community has also raised many questions about the Prosecutor General’s report. According to Yelena Topoleva-Soldunova, chairperson of the NGO Development Committee of the Presidential Council on Human Rights, prosecutors provide contradictory information on NGO inspections from time to time.

“I have been working in this area for many years, and I don’t understand why information about the money coming from embassies is spun in a negative way. Missions around the world have always conducted legal public activities. NGOs never made a secret of their ties to foreign embassies and never suspected they were in violation of any laws by accepting such financing. I am sure that hundreds of organizations received money this way,” she said.

Topoleva added that inspections of thousands of organizations are fostering a negative attitude in society toward all NGOs. “They have a hard time recruiting supporters, donors and volunteers as it is — and now there’s this blow to their reputation.

NGOs are not a well-established phenomenon in Russia; we have fewer organizations than the United States or Germany, and they are not as powerful. They have yet to earn stable recognition from society,” the NGO Development Committee chairperson said.

Statistics bear out the expert’s opinion. According to a poll by the Levada Center opinion research service, Russian people’s views of NGOs have worsened during the past year: While only 13 percent had a negative opinion of NGO activities just a year ago, now 19 percent of Russians are unhappy about them.

Exactly 50 percent of respondents had a positive opinion of NGOs — the same as a year ago. At the same time, the number of people who support tougher NGO laws and the requirement for foreign funding recipients to register as foreign agents has increased, from 45 percent a year ago to 49 percent now.