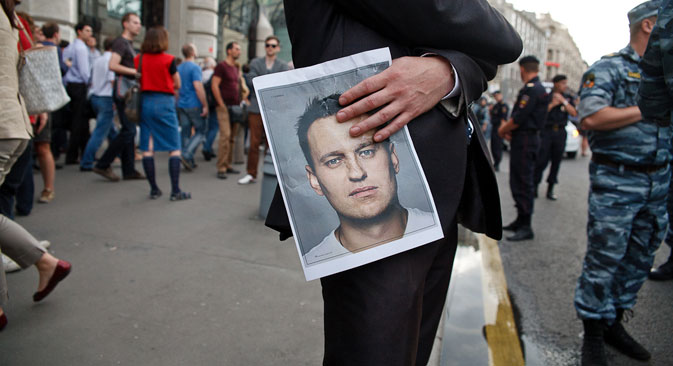 The Russian blogosphere has been keeping a watchful eye on the Kirovles case, in which Kremlin critic Alexei Navalny was the main defendant. Comments from the courtroom began appearing on the morning of Thursday, July 18, along with reports on the situation in Kirov. Interested parties could follow online as the judge passed the sentence almost in real time.

The five-year sentence slapped on Navalny caused a storm of criticism and a slew of negative comments. Politician Boris Nemtsov, Navalny’s associate and co-chairman of the liberal party RPR-PARNAS, wrote in his blog that he is sorry for Navalny’s wife and parents.

Social commenter and opposition leader Sergei Parkhomenko says that the only thing to do now is monitor the mayoral election as closely as possible: “We will be watching from point-blank range, with our own eyes, how they boost the turnout for Sobyanin by having disabled electors vote at home, using carousel voting schemes in student halls of residence and Tajik temporary registrations.”

Navalny confirms he will run for Moscow mayor

Navalny was released from custody with order not to leave Moscow

Writer and journalist Masha Gessen wonders why so many people are sharing their shock at the sentence on social networks: “I am really upset by the words of anger, horror and, most importantly, surprise that fill my friend feed… This is bad. We haven’t learned to listen to what they have been telling us for 18 months now. The regime has been telling us, via the president, prosecutors and lawmakers, that it is stupid, evil and will stop at nothing. We should stop acting surprised, we should start believing. Listen to the prosecutors… They don’t lie. It’s time we stopped lying to ourselves.”

There are contrary opinions, too. Blogger Mikhail Ivanov writes: “Five years is a lot. Prison is boring, damp and the people there aren’t great. Therefore, I’m sorry for Navalny as a person. Sorry for his wife and kids. But with all due respect, dear opposition, he’s a very poor politician. I can’t recollect a single achievement of his that would encourage me to storm the Kirov court and take him away from the dishonorable police. The authorities have finished playing with the opposition; they will keep driving economic growth and repaving roads every year.”

Journalist Darya Mazayeva writes that she has had many calls from people wishing to discuss the sentence: “You can beat me, you can trample on me all you want, but when someone’s obviously guilty, he must make no noise about unfair elections and things like that. The idea that Navalny is a victim of the bloody regime is utter nonsense. His real rating is marginal."

"Further, I personally know that he’s had contacts in the Kremlin for years. The information he leaked in Live Journal were inspired by some political forces. Navalny chose the wrong Kremlin group to back. That’s his mistake. Why snivel and whine? He did steal, there’s evidence that he did, so don’t make yourselves an idol, don’t make Navalny or Putin your idols, just learn to think more,” she added.

Sergei Dorenko, editor-in-chief of Russian News Service radio, writes: “From blogs to unquestionable leaders. I’m at a loss. I don’t see how this is logical.”