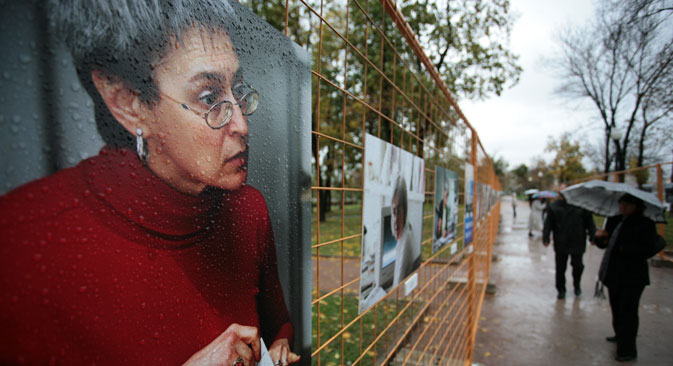 After the latest in a series of murders in the North Caucasus, Russian Duma deputies are proposing an increase on the maximum prison sentence for violence against journalists—from six years to ten.

On Wednesday, July 10, a bill toughening the penalty for offenses against journalists was introduced in the lower house of the Russian parliament. It appeared one day after 53-year-old political journalist Akhmednabi Akhmednabiev was shot dead by unidentified persons. Akhmednabiev was working for the local Novoye Delo newspaper in the Northern Caucasian Republic of Dagestan. There had also been an attempt on his life in January of this year.

The list of aggravating circumstances will be expanded to include the clause, “in connection with the victim’s professional activities,” in addition to official activities and execution of public duty.

“Only [public] service activities are mentioned in the criminal code, whereas this is an issue of professional activities,” says one of the initiative’s authors, Duma deputy Mikhail Serdyuk of the  social-democratic Just Russia party. “If you are a writer or editor working in public service and write an article, no one will come after you; God forbid they come. When someone is lying in wait by your house, and even if that person is caught and a court is considering the case, he would simply say he didn’t like you, rather than admit that it was politically motivated. ‘Professional activity’ is a broader term.”

The purpose of this bill, in Serdyuk’s words, is “to make the lives and activities of journalists safer.” At the same time, in his opinion, the initiative will work only on one condition: if the offender can be certain in the inevitability of the punishment. “[Otherwise,] give him 100 years in prison—it’s all the same to him,” says Serdyuk.

Serdyuk believes the authorities should send a clear signal that they are not indifferent to journalists’ safety, and that they will do everything they can to prevent crimes against journalists from occurring.

“We can do the part of this job that we have to do,” Serdyuk says. “As for the second part, it has to be the political will of the president, the head of the Investigative Committee, and the minister of the interior.”

Leading Russian lawyer and head of Russia’s Presidential Human Rights Council, Mikhail Fedotov, claims that the initiative by Serdyuk (an economist by training) and his colleague at the State Duma, Valery Trapeznikov (a machinist with 50 years of experience), is superfluous and pointless.

“The Criminal Code includes Article 144 [‘Interference with journalists’ lawful, professional activities,’ which the bill aims to expand], which in its third part clearly connects interference with journalists’ lawful professional activities with violence and threats thereof, and has established therefore the quite serious punishment of a six-year prison sentence,” says Fedotov. “What [these] deputies are proposing to do would duplicate what is already there.”

According to Fedotov, prosecution according to Article 144’s current wording does not distinguish between times during which an attack on a journalist takes place. “One doesn’t have to assault a journalist while he’s sitting at his computer. What matters is the connection between the assault and his professional activities,” says Fedotov.

“If a journalist is injured in a fight in a liquor store, for example, there is no connection between [the injuries] and his professional activities. Whoever attacked him did not [necessarily] have the slightest idea that they were attacking a journalist.”

The head of the Russian Union of Journalists, Vsevolod Bogdanov, contends that the problem lies in the low clearance rate of crimes against journalists. “What good is this law if no one can find the criminals in the first place?”

As Bogdanov notes, in July 2012, the Russian Union of Journalists held a visiting session with representatives of local law-enforcement agencies in Dagestan. In terms of journalists’ safety, the North Caucasus is regarded as one of the most problematic Russian regions.

“The conversation was long,” says Bogdanov. “Ultimately, the police chiefs assured us that they would come to Moscow in six months and bring data on investigations of the murders of journalists with them. Six months passed, but no one came. We did not receive the results of any investigations.”

According to Bogdanov, the Russian Union of Journalists independently assists the 300 families of the journalists killed in Russia in the past 15 years.

Poll shows most Russians do not dread repressions

Bogdanov adds that he appreciates any initiative that may contribute to improving the social status of journalists. “But nothing is working out at the moment,” he says.

Bogdanov claims that the Russian Union of Journalists has repeatedly sent its own suggestions to the Russian parliament, but they have never gained traction. When asked whether the authors of the new bill consulted him, Bogdanov says no.

Serdyuk, in turn, says, “If there are any additional arguments, I am willing to listen.”