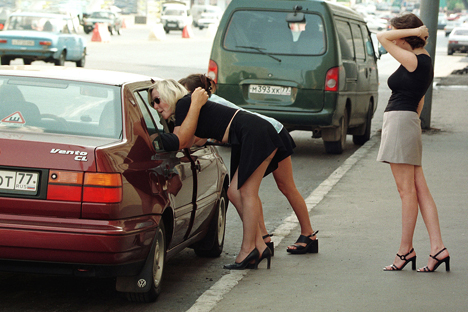 Prostitution is illegal in Russia, and, according to rough estimates of Rospotrebnadzor and the Ministry of Health, up to one million people are involved in this field. Source: PhotoXPress

An NGO working with sex workers has been denied registration. Human right activists are now planning to sue the Ministry of Justice in response

Human rights activists in St. Petersburg have decided to take the Ministry of Justice to court, after its officials refused to register their nonprofit partnership of sex workers. Activists feel certain that the problems faced by this category of people could be solved if their activities were taken out of the criminal sphere. According to various estimates, between 700,000 and 3 million people are engaged in prostitution in Russia.

Prostitution is illegal in Russia, and, according to rough estimates of Rospotrebnadzor and the Ministry of Health, up to one million people are involved in this field. According to the organization Serebryanaya Roza (Silver Rose) — an informal movement dealing with the issues of sex workers — the number of people engaged in the sex industry is actually around 3 million.

To be able to defend the rights of sex workers, activists tried to register a nonprofit organization this May. However, the Ministry of Justice refused to register it, and now the human rights activists are turning to the courts.

More: What tourists should know before coming to St. Petersburg

“Serebryanaya Roza grew out of several volunteer and charitable projects that work with the problems of prostitution,” says Irina Maslova, who heads this movement. She used to work for a charity organization involved in this sphere, but the international project that financed their activities was shut down. Nonetheless, the desire to help these people remained.

“Our experience has been very successful. We worked with street prostitution in St. Petersburg, Irkutsk and Chelyabinsk. When the project was completed, the officials of the Ministry of Health were supposed to take over the functions of preventive work with prostitutes, but they did not. On our own initiative, we organized a couple of conferences and then decided to join forces with our wards and establish an association,” says the human rights activist.

Maslova says that many people, who, for whatever reason, find themselves in the sex industry, need their help. “Our clients are men, women and transgender people,” she says.

“Their ages range from 18 to 72. They have completely different incomes and social status, as well as various working conditions. Brothel owners, who use doctors with whom we work and ask them to examine their employees, are also interested in our activities.”

The head of Serebryanaya Roza believes that, on the basis of the human right to privacy as protected by the constitution, prostitution can be removed from the list of criminal trades and people can become the masters of their own bodies.

As Maslova says, the registration of the nonprofit organization was refused for formal reasons: “We were even accused of inciting ethnic hatred and all but accused of extremism. In addition, officials say that this profession does not exist in the official classification of occupations, and, therefore, such an association cannot be established. We need this organization to help this category of people to solve their own problems — protect them from unfair and corrupt law enforcement agents.”

Irina Maslova does not have much hope in parliamentarians; most of the time, as she says, they only have a desire to earn extra political points on an issue that is clear to everyone.

Daria Miloslavskaya, council chair of the nonprofit partnership Lawyers for a Civil Society and member of the Public Chamber of Russia, explains that many nonprofit organizations face difficulties when trying to register.

“The Ministry of Justice has certain requirements, but the law does not precisely define these, and so this leads to similar negative results,” says the lawyer. “They are frequently asked to remove certain words, to add or replace something — and if a formal error is made, the chances of winning in court are small. If the Ministry of Justice has claims as to the content, then there is more chance of winning. After all, the territorial subdivisions of the Ministry of Justice may interpret the same standards in different ways, and the courts may interpret them in their own way and take the side of the plaintiff.”

Miloslavskaya feels confident that, from a formal standpoint, Serebryanaya Roza has the potential to be registered; it is likely, however, that they will need to think seriously about the form of their organization.

“I believe that it has been mistakenly named. When it comes to helping people in the sex industry, it is not an association. An association must include only workers of this sector, not human rights activists or lawyers. It is rather an organization, providing aid or assistance services to sex workers — and this form of organization has a different statute and different administration bodies. If you choose the wrong form, you may also get a refusal from the Ministry of Justice,” says the lawyer.

Vitaly Milonov, member of the Legislative Assembly of St. Petersburg, said in a conversation with a correspondent from Komsomolskaya Pravda that the organization has no chances of becoming registered. In addition, according to Milonov, the organizers may well become involved in criminal or administrative proceedings, because authorities might discern promotion of and involvement in prostitution in their case.

As for the moral aspect of the organization, experts often agree with Serebryanaya Roza: They also see a need to exclude prostitution from the criminal sphere. “I believe that, in part, we have to legalize prostitution. No country in the world has fully legalized this sphere; everywhere there are some limitations,” says Mark Levin, head of the Higher School of Economics Microeconomic Analysis Department.

The same opinion is shared by the head of the Center for Legal and Psychological Assistance in Emergency Situations, criminal psychiatrist Mikhail Vinogradov. He believes that there are more people involved in this activity — much more than 3 million — and it would be better if they paid taxes.

“In many countries, the sex industry is a legal activity, and it brings a great deal of income in the form of taxes to the state budget. As with any industry, there is a dark side to it, but that is only a small detail. Legalization may solve not only financial problems but also those related to health,” says the psychiatrist. According to the expert, the presence of a sex industry is a normal characteristic of any society.