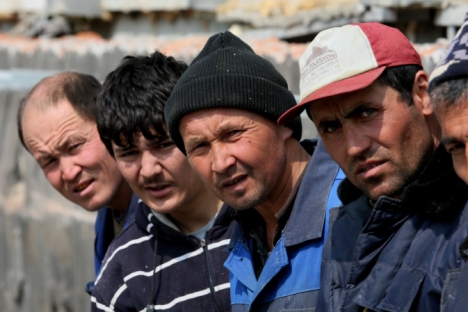 There are also around 3.5 million illegal foreign workers in Russia, which is twice the number of legal workers. Source: RIA Novosti / Vitaly Ankov

Qualified specialists will be granted temporary resident status for two years, while highly skilled immigrants will be given three-year residence permits.

Russia is developing a new approach to immigration policy. According to Federal Migration Service (FMS) Director Konstantin Romodanovsky, the focus is shifting away from existing legislation, which is geared toward temporary immigrants, and toward creating conditions for attracting skilled specialists. A point-based permanent residence system will be one of the tools employed to achieve this.

According to FMS estimates, Russia is home to 800,000 resident aliens — far fewer than in European countries. Most immigrants come to Russia from CIS countries, as well as from Turkey, China and Vietnam.

There are also around 3.5 million illegal foreign workers in Russia, which is twice the number of legal workers. To change the structure of immigration, the agency has drafted a number of bills that have already passed expert examinations by the Russian government.

Romodanovsky stated that the system of quotas for foreign workers will be the first thing to be revised. At present, the quotas are allocated to companies that are willing to give foreigners priority in hiring.

The proposed new system will change hiring rules. Vacancies will be offered to local residents during the first month, to all Russians during the second month, and only after that to foreigners.

The authorities want to introduce a kind of fairness by giving potential local hires the right of first refusal. At this point, this is just a proposal; what shape the quota system will eventually take will be decided only by the beginning of next year.

Under the FMS plans, foreigners will have to apply for a temporary resident status after staying in the country for 90 days. This is similar to the existing “temporary residence permit.”

Qualified specialists will be granted the status for two years, while highly skilled immigrants (those earning upwards of roughly $60,000 a year) will be given three-year residence permits. FMS territorial branches will be responsible for issuing the permits, which will resemble visas to be placed in passports.

In addition, foreign students of Russian universities will be allowed to work, officials said. Graduates of higher education institutions will be offered an opportunity to stay in Russia for three years. If a graduate’s qualifications are in demand, they will be able to obtain Russian citizenship.

Furthermore, foreigners will also receive the right to register at a place of residence. This will be only a right and not an obligation, Romodanovsky explained. Residence permits will be granted under a point-based system. The FMS will take into account the age, education and work experience of applicants.

Both temporary foreign visitors and permanent residents, including participants of the relocation of compatriots program, will be asked to fill out a questionnaire about their education, age, Russian language proficiency, work history, job offers from Russian employers and relatives in Russia. Each application will receive a point score. To obtain legal status in Russia, applicants have to score 75 points out of 100.

At present, to apply for a Russian residence permit, foreigners must first obtain a temporary residence permit and stay in the country for between one and three years with that status. The new form will simplify the procedure. However, experts note that, for anyone over the age of 55, scoring the required amount of points will be extremely difficult.

Vladimir Burov, deputy head of the FMS Citizenship Division, explained that investors and entrepreneurs doing business in Russia would be fast-tracked for Russian citizenship.

“The government will draw a list of business activities the Russian state is interested in. The minimum annual revenue must be 10 million rubles [around $304,000],” said Burov. The dependants of entrepreneurs will receive the same privileges, but nannies or housekeepers that work in such families full-time will have to go through the immigration process just like everybody else.

According to the authorities, the main immigration-related problems are overstayed visas and violations of Russian law by immigrants. Offenders will now be subject to harsher penalties.

Before, they were either fined or deported; now, both penalties will apply. By court decision, administrative offenses will serve as grounds for deportation or inadmissibility. Tax offenses will be vigorously prosecuted, as well.