Hundreds of illegal workers held in camp near Moscow 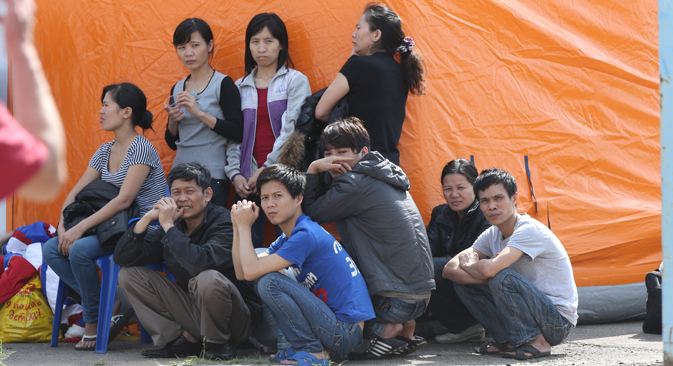 The immigration camp hastily set up in the west of Moscow following large-scale inspections of the city’s markets looks more like a refugee camp. Source: ITAR-TASS

The Moscow police and the Ministry of Emergency Situations have been forced to open a pre-deportation camp for illegal immigrants, which is already almost full to capacity. Meanwhile, the Federal Migration Service is planning to create more than 80 new detention centers for illegal immigrants. Experts argue, however, that simply rounding up illegal aliens will not solve the immigration problem.

The immigration camp hastily set up in the west of Moscow following large-scale inspections of the city’s markets looks more like a refugee camp. Two hundred army canvas tents have been pitched on the pavement.

The detainees — mostly from Vietnam, but also some from Egypt, Syria and Afghanistan — sleep in bunk beds. Next to the tents is an endless wall of 100 portable toilets, followed by field kitchens where buckwheat and tinned meat are prepared. The whole operation is organized and run by the Ministry of Emergency Situations.

Representatives of the Embassy of Vietnam have already expressed their dissatisfaction with the “simply inhuman” living conditions in the camp, with 40 people being forced to share tents that are only 540 square feet in size. The main complaint among experts, however, is not so much the living conditions in the camp, but rather the fact that the camp itself is the result of questionable policy.

Sergei Markov, director of the Institute for Political Research, has noted that the very fact the camp has been set up shows the government’s non-systemic policy on migration.

“The camp is a temporary measure; it is a quick-fix to a problem that has existed for years. What it does is expose the weakness and ineffectiveness of the government. Now it’s important to establish exactly what it is that we want. We need immigrants, but they need to be legal immigrants. We need to understand who is to blame for the fact that they are here illegally: the immigrants themselves, or the business structure that invited them over in the first place,” said Markov.

Meanwhile, the Federal Migration Service has already prepared a bill that should solve the problem of illegal immigration. The document outlines the need to set up more than 80 centers in Russia for the detention of foreign nationals subject to deportation.

Possible negligence in preventing illegal immigration in Moscow being probed

As Yevgeny Andreyev, researcher at the Higher School of Economics’ Institute of Demography, explained, it is not in Russia’s interests to combat immigration. The country needs to come up with ways to legalize their presence in the country, because it is through immigrant workers that the problem of the ageing population can be solved.

“According to Federal State Statistics Service estimates, we have around 700,000 people of retirement age in the country every year. That is a huge figure. And that number’s not going to get any smaller,” Andreyev said.

“The population continues to age, and that process presents new challenges, reducing, as it does, labor resources. This is a major global problem, and we can’t do anything about it. There are two areas that need to be developed — the infrastructure for retirees and a system for inviting foreign workers to Russia.”