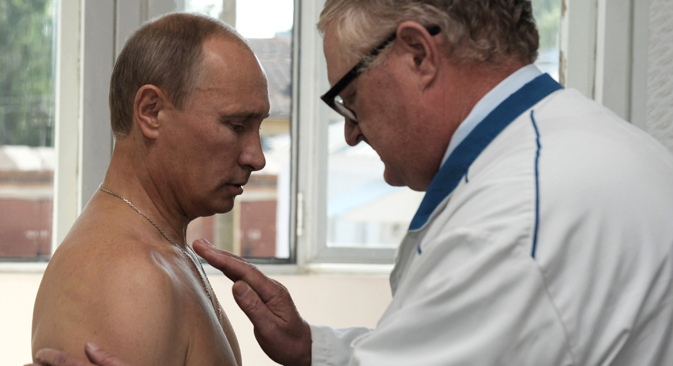 The president’s personal doctor has told that Putin is physically younger than his age and perfectly fit for work. Source: AP

The Kremlin’s chief physician spills the beans about the president’s health.

The president’s personal physician has told the media that Vladimir Putin is physically younger than his age and perfectly fit for work. Experts believe that the statements were made to do away with rumors that the head of state has been suffering from health problems.

“He [Putin] is a very athletic individual. From a medical point of view, Putin is considerably younger than his years. His sporty lifestyle contributes to an excellent capacity for work,” said Sergei Mironov, deputy manager of the Presidential Department, Surgeon General and Honored Doctor of the Russian Federation, in an interview with the magazine Itogi.

Photo of the day: Putin fishing in Tyva

Mironov revealed that, once, he and his colleagues decided to count all the hours Putin spent flying planes in a given period of time: It turned out that the president “surpassed all the standards for pilots” in terms of his physical condition; he even finds time to nap on the plane.

Mironov also noted that the Russian leader dedicates a lot of time to swimming. “I believe he uses swimming as a way to deal with stressful situations, more so than anything else,” the physician said.

“Mr. Putin is quite skeptical about taking any kind of medicine, even if it’s your run-of-the-mill cold tablet. He prefers natural remedies — tea with honey, a sauna and a massage,” Mironov said.

During the conversation, the doctor also noted that, despite practicing judo — not the safest of sports — the president has never suffered any serious injuries.

“To be fair, it’s not uncommon for the media to exaggerate somewhat the medical histories of our country’s leaders. There were rumors going around not long ago that Putin was having problems with his back. I don’t see any reason to hide information about the health of our president, but there is also a thing called medical ethics. If I underwent an operation on my spine, for example, then I’ll tell you about it myself,” said Mironov.

Cardiologist Alexander Sharandak said in an interview with Kommersant that physical exercise and traditional medicine could only be beneficial for Putin. “If you are 60 years old and live a healthy and active lifestyle, then that is a very good thing. It’s only when you overdo it that problems can arise. But if you engage in some kind of physical activity for an hour or an hour-and-a-half every day, then that’s very beneficial,” he said.

“I’m sure that his cardiovascular system is in perfect working order. I see no reason why he should stop,” Sharandak said about Putin. “There’s got to be a good reason for taking tablets, and some treatments rely on tablets for them to work. But, looking at his physical condition, I think that natural remedies are all he needs. He moves like a young man, and there’s nothing wrong with his gait. How does he look? I’ve not seen him up close, but I’ve got to agree that he looks younger than 60.”

Putin dives to the bottom of the Baltic Sea

Political PR specialist Andrei Zverev believes that the appearance of the Surgeon General’s comments was no accident, and that they were intended, above all, for the elite.

“The question of the president’s health is of vital significance — especially in Russia, where all the major political decisions are made by the head of state. We are all aware that many people are talking about a supposed split among the political elites. This serves as a definite signal that the center of decision-making still lies in the presidential administration in the Kremlin, and that the person making those decisions is in excellent physical condition,” said the expert. “Any questions regarding his health are nothing more than rumors that have nothing to do with reality.”