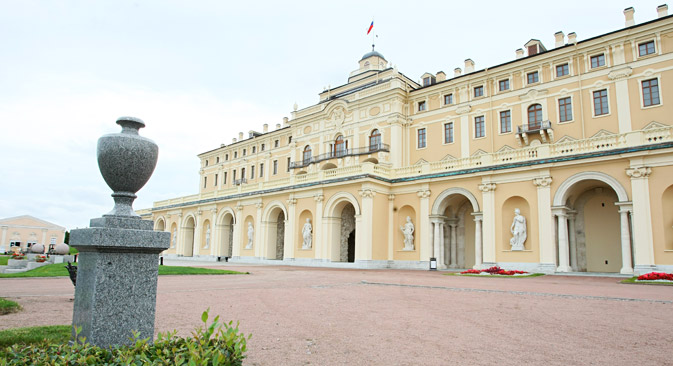 The palace and the surrounding village of Strelna already have plenty of experience hosting the world's elite. Source: Natalia Pietra / RG

The Constantine Palace has been once again called into service as the setting of a major international meeting.

The G20 summit, which opened today outside St. Petersburg, is taking place in the Constantine Palace, a building with a monumental cream-colored edifice and a magnificent park. The setting is part of Russia’s charm offensive for its G20 guests, which also includes a gourmet menu, special music and fireworks.

The palace and the surrounding village of Strelna already have plenty of experience hosting the world's elite. The 300th anniversary of the founding of St. Petersburg was celebrated here in May 2003, an event that was attended by leaders from 45 countries. President Vladimir Putin also hosted former U.S. President George W. Bush here, and the building was the setting for the 2006 G8 summit.

During the summit, a part of Strelna will be declared as a restricted area. The movement of vehicles along the St. Petersburg Highway will be restricted; entrance to the restricted area will be possible only by special permits.

Putin speaks on Syrian conflict prior to G20

The bus routes that connect St. Petersburg with the area will make detours. Water approaches will also be closed, and the coastline will be guarded by military boats and underwater divers.

The location is secluded for the protection of the elite guests, but also for the benefit of the residents of St. Petersburg. “The summit should have a minimal impact on normal life,” said Oleg Tsatsurin, one of the members of the Organizing Committee. Had the summit been held in the city itself, the traffic problems of Russia’s northern capital, a city of 5 million, would have become monumental.

To avoid any additional traffic on the main highway from Pulkovo Airport into the city center, a special road was built for the summit. It allows motorcades to travel from the airport to Strelna in 15 minutes.

Summit participants are not only working in Strelna; they are staying there, too. A village for guests of the Constantine Palace has been constructed along the Gulf of Finland with two-story cottages named for Russia’s major cities arranged in a pattern that resembles the map of Russia. Putin will stay in the cottage named for his hometown, St. Petersburg.

The 3,000 journalists who are covering the summit have no such privileges, though. They will be staying in hotels in St. Petersburg and transported to the summit site by hydrofoil.

The menu for the summit attendees is being kept in the strictest confidence. However, the catering will be done by Concord Catering, which fed the participants of the 2006 G8 summit with Beluga caviar, pancakes with fresh strawberries, sturgeon and tarragon sorbet with pear liqueur.

Participants are also guaranteed to drink well. The Constantine Palace boasts one of the world’s largest collections of fine wines, about 13,000 bottles. Housed in stone grottos, the collection is founded on 49 varieties of Hungarian wines, but there are also samples of wines from France, Spain, Italy, Germany, the United States, Chile and South Africa.

Preparations for the summit are expected to cost in the vicinity of $60 million.

St. Petersburg officials hope the summit will result in an increase in investors and tourists.