Debate on NGOs as foreign agents continues in Russia 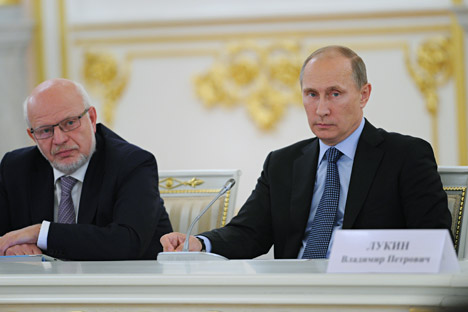 Chairman of Russian Council for Human Rights Mikhail Fedotov (L) and Russian President Vladimir Putin during the meeting of the Council on Civil Society and Human Rights on Sept. 4. Source: ITAR-TASS

Deputies asked to explain the definition of "political activity"

Russian President Vladimir Putin held a meeting of the Council on Civil Society and Human Rights on Sept. 4, during which he attempted to clarify his position on civil rights advocates in nongovernmental organizations (NGOs).

He reminded those present that the Russian law is constructed in such a manner so as to allow NGOs engaged in politics and funded from abroad to openly identify themselves as such.

"In my opinion, this is a fair and honest approach; there is nothing unusual here," the president said. The head of the state specified that a similar opinion on foreign funding is followed in other countries. However, procedures for the registration of NGOs as "foreign agents" should be clearly verified, said Putin.

“I agree with those critics who say that it is not all that smooth — this is true,” said the president. “Therefore, if you have any suggestions for improving these procedures, structures, I am ready to hear those out.”

Earlier, the chief civil rights advocate of the country, Vladimir Lukin, sent a complaint to the Constitutional Court of Russia about the law on foreign agents, the provisions of which may conflict with the Constitution of the Russian Federation.

Lukin drew attention to the fact that the definitions of "foreign agent" and "political activities" are inaccurate and, therefore, their interpretation can be blurred.

Through the amendments to the law on NGOs that took effect about a year ago, organizations involved in political activities and receiving funding from abroad have to be registered with the Ministry of Justice as a "foreign agent."

This year, the General Prosecutor's Office checked on NGOs that were suspected of using foreign capital. As a result, the court declared 22 organizations "foreign agents."

All 22 of those organizations refused to register under this status. Four organizations were fined by the court for their refusal: the Voice association, the Kostroma Civic Initiatives Support Center, the international LGBT festival "Side by Side," and the ecological club Ulukitkan from Blagoveshchensk.

Sergei Nikitin, the head of the Russian branch of one of the victims — the NGO Amnesty International — is convinced that Lukin’s complaint could influence changes in legislation.

"Since the introduction of the draft of the law, it has not been clear what ‘political activity’ is. Even the author of the document couldn’t explain it to me. Any nebula in interpretation opens up a wide horizon for its applications,” said Nikitin.

The civil rights activist is convinced that, if the phrase "foreign agent" would have been replaced by some more adequate term, the NGOs would be registered on the ministry’s list.

"It is unacceptable to call civil rights activists foreign agents, because it is a term that is synonymous with the word ‘spy.’ The role of an agent is to perform for money the tasks of the one who pays for it. When it comes to foreign funding of NGOs, then, there is no execution of orders for foreign funds. These funds are, for the most part, independent of their governments, and no grant involves execution of any orders,” the head of Amnesty International in Russia said.

The director of the Institute for Political Studies and member of the Public Chamber, Sergei Markov, doubts that the term "foreign agent" will be replaced, but he finds it necessary to amend the law.

“The main idea is to give citizens an opportunity to know what kind of organization is in front of them. Funding could provide an insight on what basic priorities the political line is formed,” the expert said.

The Public Chamber member is also concerned about how to determine foreign funding and its volumes. 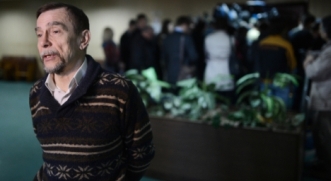 "For example, a Russian organization arranges an event on the territory of Ukraine, and, at our request, local authorities release vehicles for us. Formally, we could say that Ukraine has financed us and we have become foreign agents, even though this is not the case. It is thus possible to regard any aspect of international activities,” said Markov.

“It is necessary to take into account the volume of foreign funding. If it is between one and two percent, it would be faulty to assume that it may have impact on the activities of the entire organization."