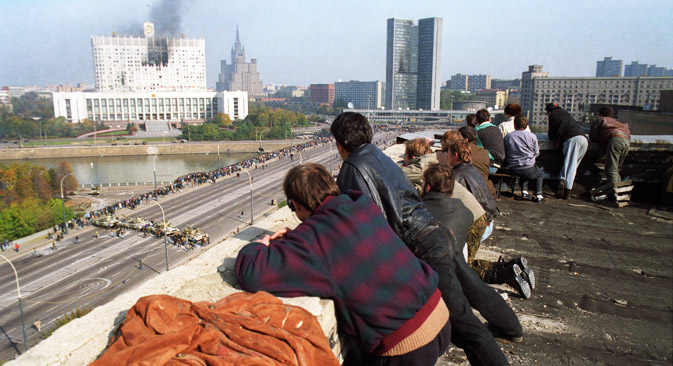 Gregory Nekhoroshev, former Moscow correspondent for the BBC (1988-1995), tells the dramatic story of his kidnapping and the fate of his peers during the crisis.

Twenty years ago, I was sitting on the floor of a corridor in Moscow’s White House, home of the Russian parliament, waiting for fate to take its course. Young people in their twenties wearing camouflage and holding Kalashnikovs were at both ends of the corridor at makeshift military posts a hundred steps from me.

I had been captured at about two in the morning when I was leaving the White House go to the BBC bureau to hand in my report on the fourth day of the confrontation between the Supreme Soviet, as the parliament was then known, and President Boris Yeltsin.

Mobile phones were rare, and land lines in the building had been cut off. I had to leave the building and go to the nearest phone booth or to the bureau if I needed to send a transcript of an interview with someone from the rebellious parliament to London.

There were no problems for the first four days. But on the evening of Sept. 25, hundreds of RNU armed fighters appeared in the corridors of parliament and began to enforce new rules. “Hey, a BBC correspondent,” said one of the fighters, looking at my accreditation from the Ministry of Foreign Affairs. “We’ll have to shoot him. You are an enemy and, moreover, a dangerous one.”

No one listened to my explanations, I was searched, they seized my bag with a voice recorder and documents, and ordered me to sit against the wall within sight of the two soldiers. I sat there for about an hour and a half, under the dim light of the emergency lights. The electricity had also been turned off. They cut off the water too, so a strong smell was coming from the toilets.

At about four in the morning a soldier came back and said, “Rutskoi told us to let you go in the morning. Lucky, you will live awhile longer.” He led me to some office where two soldiers were sleeping on the tables among scattered papers with parliament logos. I didn’t feel like sleeping. He asked why I, a Russian, would work for the enemy, the English.

I was scared and didn’t want to argue, so I said that I am just a reporter, and don’t pose philosophical questions. My job is to write about what I see. This was happening all over: RNU fighters arrested Danil Galperovich, JJ Press Japanese agency correspondent, three times.

As the tragic outcome came closer, the aggression towards journalists escalated: representatives of both sides saw us not as observers, but as active participants. Even the many ordinary onlookers who were milling around outside the White House were aggressive towards us.

On the evening of Oct. 3, the main action moved to the Ostankino television center, which armed supporters of the Supreme Soviet tried to capture. More than a hundred journalists were among the crowd of attackers. Special forces units began to fire from the roof of the TV center.

Then I learned that Celerier had been wounded – a bullet went under his body armor and into his back. Among the dead were Rory Peck, German stringer from ARD, and Yvan Skopan, cameraman for France’s TF1 television station. Peck was a sociable guy, everyone knew him. He traveled to almost all the “hot spots” of the former Soviet Union.

After a sleepless night, most of the journalists returned to the White House because we had heard there would be an assault at dawn. And indeed, at six o’clock a column of tanks began to come from the direction of Kutuzovsky Prospekt. The shelling began. Around noon, after calling in dozens of reports from phone booths, I thought I would collapse from exhaustion.

Suddenly I remembered that an American friend was renting a one-room apartment on the top floor of one of the high-rise buildings on Novy Arbat. I found Paul Klebnikov, a reporter for Forbes, in my friend’s apartment sitting in a chair by the window.

We sat by the window for a few hours in silence, as if watching a performance in the theater. Khlebnikov occasionally wrote something down in a notebook, I went to the kitchen every half hour to call in my reports.

View the timeline: Chronicles of the constitutional crisis

Suddenly, we heard retaliatory gunfire ring out from the roof of our building. We ran out of the apartment into the hallway, and threw ourselves to the floor. Just then, a bullet flew through the corridor window, ricocheted off the ceiling to the tile floor, and tile fragments broke the frontal bone in my skull. Blood began to gush out of my forehead.

The door of the next apartment opened and the neighbors told us to come inside. A man, woman and child around seven years old had been sitting in the hall, the safest part of the apartment. We sat there huddled together, and the boy saw the blood and shouted, “They killed this guy, mom, they killed him!” Somehow I just said automatically, “They didn’t kill me, I was just drunk, and I slipped and fell.” The boy smiled.

Klebnikov said, “Here is the end of Soviet power.” This son of a Russian emigrant and descendant of the Decembrist Pushchin returned to Russia a few years later to become the editor of Forbes. He was later killed in the new, non-Soviet Russia.