How October 1993 led to President Putin 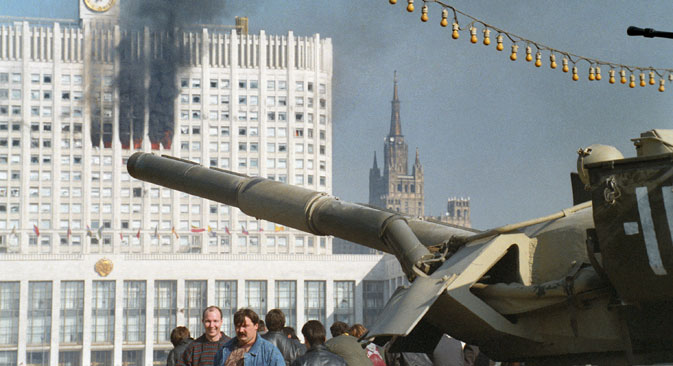 The conflict between President Boris Yeltsin and the State Duma ended with the shelling of the Russian White House. Source: ITAR-TASS

Twenty years later, the changes to Russia’s political system enacted in the aftermath of the October 1993 attempted coup still reverberate.

On Oct. 3, 1993, post-Soviet Russia faced its first major political crisis. The two-day conflict between then-President Boris Yeltsin and the State Duma began with the storming of the Ostankino television tower and ended with the shelling of the Russian White House. The decisions made in the aftermath of the showdown can be felt in Russia even today.

The constitutional crisis actually began on Sept. 21, 1993. According to the Constitution that was in force at that time, the State Duma was the most powerful body of government. The sitting Duma at that time had been chosen in 1990 by the Congress of Soviets.

Yeltsin, elected in 1991, was unable to choose a prime minister without the Duma’s consent, nor did he have the power to dissolve the Duma. As a result, the first Prime Minister of post-Soviet Russia, Yegor Gaidar was actually only the acting prime minister, since he was never confirmed by the Duma.

Gaidar, who was the architect of economic shock therapy and Yeltsin, who backed the plan, were vastly unpopular among the Russian public at the time, which encouraged the decision of the Duma leaders to act against the executive branch. 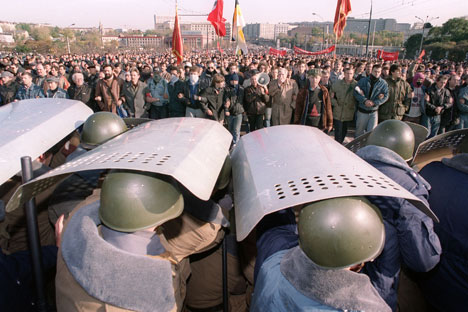 The supporters of the Duma near the White House, 1993. Source: AFP / East News

In December 1992, the Duma refused to ratify Gaidar’s appointment and he resigned. In March 1993, the lawmakers made an attempt to impeach Yeltsin, however, they were unable to collect the two-thirds majority needed for the impeachment. Yeltsin’s opponents in the Duma also failed in an attempt to win a vote of no-confidence against the president in April.

By fall, Yeltsin was ready to assert his power over the Duma. On Sept. 20, he signed a decree to dissolve the Duma. The next day, the deputies declared that this decree was forbidden under the Constitution and removed Yeltsin from office, making Vice President Alexander Rutskoy the head of state.

After this, electricity and water were cut off to the White House, which was at the time the seat of the Duma, and later police units were assigned to surround the building. The idea was that the lawmakers would be forced to leave, but the opposition lawmakers held out for two weeks – until Oct. 3.

On that day, the supporters of the Duma broke through the police lines around the White House. Rutskoy greeted the crowds and told them to take over both Moscow City Hall and the Ostankino television center.

Both attacks were fought off, however, and the next morning, troops faithful to Yeltsin entered Moscow and began shelling the White House. Photographs of the top of the white building turned black by smoke became iconic images of the chaos taking place in post-Soviet Russia.

The number of those killed in the protests remains unclear. Official sources cite a number close to 200, while others claim 2,000. In the end, Rutskoy and the leaders of the attempted coup were arrested, but all were amnestied in 1994.

In December 1993, a new Constitution was adapted on a referendum and new Duma elections took place. This Constitution gave the president more power, including the ability to appoint high-ranking officials. It also divided the parliament into two houses – the State Duma became the lower chamber and the Federation Council was established as an upper chamber.

The Constitution set out new rules for electing representatives – Duma deputies would be elected from both party lists and district elections while the Federation Council would be made up of representatives from each Russian region.

The events that took place in October 1993 secured the domination of the executive branch over the legislative and judicial branches, effectively prohibiting the country from being a parliamentary republic.

Mikhail Krasnov, who was one of the drafters of the Constitution said that at that time, the decision was justified: “The Parliament should not have stood in President Yeltsin's way when he was carrying out reforms,” Krasnov said. But he added that today this Constitution, which was drafted in a very difficult time in Russia’s political development, should be modified.

“The president can continue to be a stabilizer, but the government should conduct the policy sanctioned by the Duma, and report back to the Duma.

But Valery Fedorov, the director of the VTsIOM public opinion research center disagrees. “Russian politics are naturally uncompetitive,” Fedorov said. “As soon as some kind of competition appears, it becomes destructive. This is why the elite and the people as a whole start running away from this competition, looking for one leader who can unite everybody.” 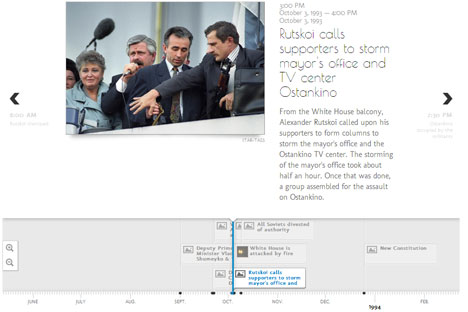 View the timeline by RBTH. 1993: Chronicles of the constitutional crisis