The making of the Russian constitution 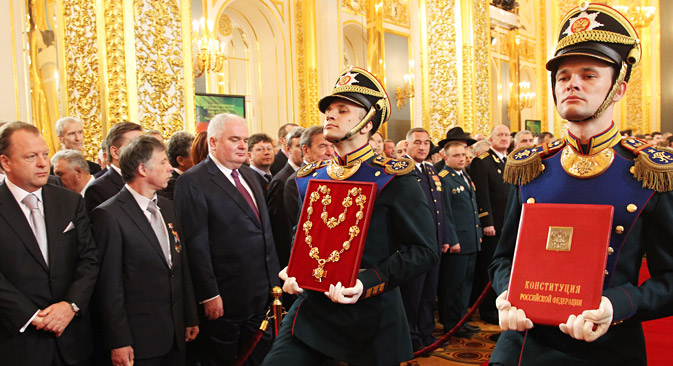 Russian Constitution was adopted on December 12, 1993 and determined the fundamentals of the state system, the rights and freedoms of citizens. Source: ITAR-TASS

December 12, 2013 marks 20 years since the adoption of the Russian constitution. In commemoration of that date, Andrey Goltsblat reflects on his time as head of the expert group that drafted the document.

After the collapse of the Soviet Union, a completely new political body appeared on the post-Soviet territory. The newly independent country of Russia needed a new state government structure.

When he was still chairman of the Supreme Council of the Russia Soviet Federated Socialist Republic, Boris Yeltsin ordered the creation of a commission that would draft a constitution for the country. Work on the document began in 1989.

I joined the Constitutional Commission as its chief of staff in the summer of 1990. I was 28. So was our executive secretary, Oleg Rumyantsev. The experts that formed the commission were mostly between 50 and 60.

We lacked the most basic things for normal work, such as computers and copiers. Of course in those days there were neither cell phones nor e-mail. We had a single fax machine for the entire commission, and it only came after the work had already begun. Despite these problems, however, the atmosphere was very lively and we were all excited about the changes taking place in the country.

I had an ancient Lada car that I could park right outside the White House. I remember when we got our first delivery of some modern office equipment: We set it up in the huge gym of the Council of Ministers administration and turned it into the core of a computer network that we then used to process the numerous amendments to the draft constitution.

Working on the constitution was a very unusual and unforgettable experience. The powerful intellects that Oleg Rumyantsev had managed to bring together could solve any problem we faced.

We had no time for rest; our discussions turned into full-blown intellectual debates. Once we all spent nearly a month working at an out-of-town compound belonging to the Soviet Council of Ministers. This was probably our most productive period.

Our biggest arguments had to do with the chapters describing the balance of powers among the president, parliament, and government. Some members of the commission insisted that not only the prime minister but also other key ministers should require the parliament's approval to be appointed.

Others proposed a wording that excluded parliament from the cabinet-forming process; they suggested doing away with the post of prime minister altogether and vesting ultimate executive power in the president.

I remember tanks in the streets of Moscow during the 1991 putsch. I immediately left my family in Crimea, where we were on vacation, and flew to Moscow. The situation was unpleasant, but I was not scared. In 1991 everything ended quickly and everyone felt positive about the future. That was not the case later.

On Sept. 21, 1993, I left the White House and went home. I was having dinner with my family and watching TV when the news bulletin was interrupted and the president announced the dissolution of parliament.

One hour later, a courier came and told me that everyone was being summoned back to work. So I returned to my office; it must have been around 11pm. The entire commission staff had gathered. Oleg Rumyantsev told us we had to draft a parliamentary resolution in response to the presidential decrees, so we set to work.

Rumyantsev was constantly leaving us to attend the parliamentary session and come back with new amendments to our text. At about 5am, I went home, planning to return to work the next day. But when I returned, the White House had already been sealed off and nobody could get inside.

The situation quickly deteriorated. Our enthusiasm vanished and it became clear that this would not end well. I did manage to get into work, and there were already signs of problems with the power supply, communication systems, and sewage in the building. On one of the first days [of the crisis] I stepped out of our office into the darkened corridor where armed people were scurrying about.

VIEW THE TIMELINE: Chronicles of the constitutional crisis

I took the plaque reading "Constitutional Commission" off the door, thinking that if everything returned to normal I would put it back on - otherwise I would have something to keep for memory. It turned out to be the latter. Later on I gave it to Oleg, since I felt he was the person who deserved it most.

Then our workplace was shelled by tanks; the Constituent Assembly adjourned; the amended constitution was passed in a referendum; and the first parliament was elected.

From 1991-1994, he served as chief of staff for the Constitutional Commission at the Russian Supreme Council and led the group of experts that drafted the Russian constitution.