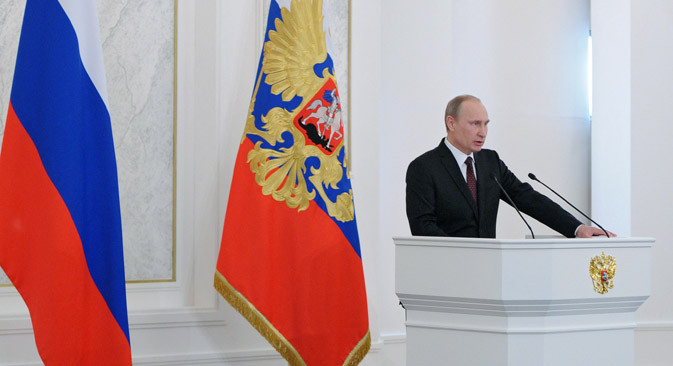 Vladimir Putin: Companies registered in foreign jurisdictions must be stripped of their right to receive government support and bid for government contracts. Source: RIA Novosti

The Russian president has announced a campaign to repatriate Russian companies from offshore havens, and attacked “genderless and barren tolerance" in the West.

President Vladimir Putin blamed the country's economic problems on unresolved issues at home, rather than external circumstances, the first such admission from the Russian leader since the Russian economy began to slow down.

In this year’s annual address to the Federal Assembly on Dec. 12, Putin proposed a stricter system to repatriate Russian money in offshore havens. Reducing the Russian economy's reliance on offshore havens was one of the central objectives of the government's economic policy, along with such traditional elements as improving productivity and fostering innovation, he said.

PHOTO OF THE DAY: Putin gives his annual address to the Federal Assembly

“The profits of the companies that are registered in offshore havens but belong to Russian owners and beneficiaries must be taxed under our own tax code, and the tax revenues must be paid to the Russian treasury,” Putin said. “We must come up with a system for getting hold of that money.”

Companies registered in foreign jurisdictions must be stripped of their right to receive government support and bid for government contracts, the president added.

Putin began his annual speech by criticizing – without naming any names - poor implementation of a series of his social policy decrees issued when he began his current term of office on May 7, 2012.

Andrey Chernyavskiy, a senior fellow at the Higher School of Economics in Moscow, said that the president’s initiative is sound in theory, but he does not quite see how it can be implemented in practice.

“To understand the context of this initiative, we must remember that we have entered a period of stagnation,” Chernyavskiy said. “The federal and regional treasuries are struggling, and they need all the help they can get. This is one of the possible mechanisms. We don’t want to raise taxes here in Russia, but we want to increase tax revenues from companies that are part-owned by the state or receive government guarantees.”

Putin also called for the country “to turn towards the Pacific.” His proposals include establishing a network of special economic zones in the Far East and eastern Siberia with incentives for new businesses that do not merely exploit Russia’s natural resources.

Russia also needs tighter controls on immigration, he said. He spoke of possible new legislation under which companies and individual entrepreneurs would need to buy special permits to hire foreigners. The price of these permits would be determined by the issuing regional authority, and the permit would only be valid in the region where it was issued.

Putin’s speech contained strong words about what he called the "so called tolerance, genderless and barren” in the West, and about the erosion of traditional values. In his opinion, in many foreign countries there is now a compulsory requirement for the public "to pretend that there is no difference at all between good and evil.” He described the erosion of traditional values as an anti-democratic process, which is being pressed on the public against the will of the majority of the people.

Boris Makarenko, the head of the Center for Political Technologies, said he was dismayed by Putin’s remarks about values, which preceded the foreign-policy section of the address.

"These remarks used the kind of language that people in the West stopped using several decades ago," Makarenko said.

Outlining the challenges facing Russia on the international arena, Putin emphasized that the global military-political, economic and information competition is becoming ever more fierce. He said he believes Russia must claim a position of leadership to defend international law and uphold respect for national sovereignty.

“In recent years we have seen several examples of attempts to impose an ostensibly more progressive development model on other countries. In practice, these attempts have led to regressive, barbarian outcomes and bloodshed,” Putin said, referring to recent events in the Middle East and North Arica.

“In Syria, the international community has had to make a fateful choice: Either we slide towards further erosion of the foundations of the international system, to the principle of might makes right and to the proliferation of chaos - or we make responsible collective decisions," the president said. 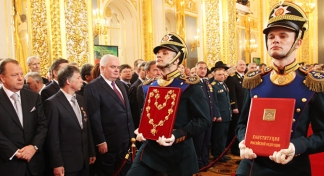 Read more: The making of the Russian constitution

From Syria he moved on to Iran, stressing that the country has an inalienable right to develop nuclear energy. He added, however, that all the Middle Eastern states must have guaranteed security.

He added that Moscow was worried by the development of new weapons systems. “Foreign countries’ efforts to increase the capability of strategic high-precision weapons, combined with the growing capability of the missile defense system, could bring to naught all the previously reached agreements on strategic nuclear arms reductions.”