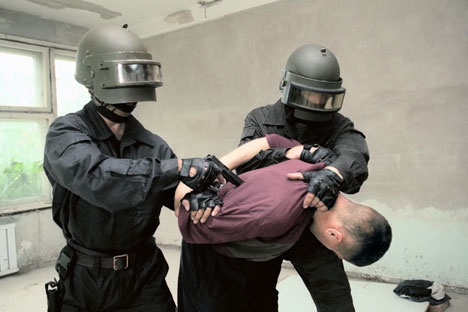 FSB officers will be given the right to perform body searched on suspected individuals and inspect their belongings and vehicles. Source: ITAR-TASS

Russian MPs want to step up counterterrorism measures to include more control over what the Internet.

The powers of the Russian Federal Security Service (FSB) will be expanded, electronic payments in the Russian segment of the Internet will come under stricter regulations and, overall, state control over the Internet will be stepped up if the State Duma, or parliament, passes three draft laws submitted by deputies representing all the four parliamentary parties.

The MPs believe that these if the proposed bills pass, it will help the law-enforcement and security agencies to prevent terrorist attacks like the recent double suicide bombing in Volgograd, in which 34 people were killed and more than 70 injured.

FSB may be entitled to search citizens, vehicles in anti-terrorism fight

Amendments to the Law on the Federal Security Service allow for the personal search of citizens, their belongings, vehicles and cargo.

Experts, however, said the already existing laws are enough to successfully tackle the terrorist threat and expressed concern that Russia may turn into a police state.

The draft bills, they said, are less about crime prevention and more about infringing on the rights of ordinary citizens.

Terrorists to be searched

Under the proposed draft laws, FSB officers will be given the right to perform body searched on suspected individuals and inspect their belongings and vehicles. At the moment these powers belong only to the police, with FSB staff having the same authority only in areas where there is a counterterrorism operation under way.

Sergei Goncharov, the president of the international association of veterans of the Alfa antiterrorist unit, said he supported the proposal to allow FSB officers to body-search people.

But Nikolai Svanidze, a prominent journalist and Public Chamber member, said he could not disagree more. He is convinced that additional powers granted to FSB personnel will result in serious violations of civil rights and will breed corruption.

"If a person does not want to be body-searched, they will start offering bribes in exchange for not being touched. People will grow afraid of everyone, terrorists and law-enforcers alike. Furthermore, many of the provisions in the proposed bills are not clearly defined, which may create serious problems," Svanidze said.

The amount of funds that can be transferred at a time in a payment of that kind will be restricted to 1,000 rubles ($30), with a total amount of monthly payments not exceeding 15,000 rubles ($450).

At the moment, the caps for anonymous transfers to a digital wallet are 15,000 rubles ($450) for a single payment and 40,000 rubles ($1,200), for a monthly total. It is also planned that digital wallets issued outside Russia or by international financial organizations will be banned altogether.

Yuri Sinodov, the founder of the Russian Internet business specialized publication Roem.ru, said that the move will do serious damage to small businesses. "It will break down a large number of stable and perfectly legal business models that operate today," he said.

Veteran security officer Sergei Goncharov said he did not see much point in this initiative, because terrorists “do not deal with amounts like these, rather in tens and hundreds of millions of dollars."

But Goncharov said he does support another aspect of the submitted draft laws, that of monitoring the Internet more closely. In particular, it is proposed that individuals and legal entities shall have to notify the Roskomnadzor (Federal Service for Supervision in Telecommunications, Information Technology and Mass Communications) before launching any project that allows users to distribute or exchange information.

According to one of the authors of the bill, deputy chairman of the State Duma committee on information policy Leonid Levin, these projects may include any mass media, email services, social networks and torrents.

Media outlets that are already officially registered in Russia would be exempt from this requirement. However, all the above resources would have to store information about their users for at least six months and supply it to the law-enforcement and security agencies or else pay fines, Levin explained.

Foreign websites providing information resources on Russian territory, too, would have to store records on receiving, transmitting, delivering and processing various electronic data for six months, and to provide it to the law-enforcement agencies if requested to do so, the draft law proposes.

Currently, the requirement to store user databases for three years applies only to communications providers, with the FSB and the police having remote access to that information.