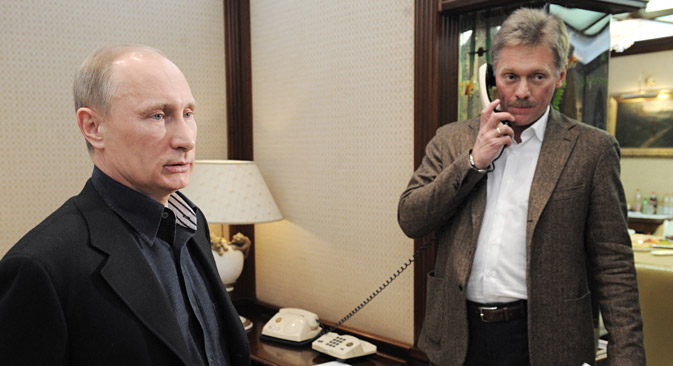 Dmitry Peskov, the Kremlin spokesman, tells the Russian media about why he blushes when Putin talks about Russian history.

Russian presidential press secretary Dmitry Peskov’s talk with the Russian media covered topics that ranged from the serious to personal anecdotes, including Moscow's stance on the events in Ukraine, the recipe for victory in the Sochi Olympics, and his blushing moments when he talks to the president.

I never have to tell lies, [which would be] something completely unacceptable. I was born to a family of diplomats, I am a diplomat myself. When I was posted to the Soviet embassy in Ankara as a young diplomatic officer, I got lucky to have a very good mentor, Ambassador Albert Chernyshov.

Opinion: Crisis in Ukraine - A catalyst for long-overdue change?

It is absolutely unacceptable for us to interfere with the internal affairs [of a foreign country]. We are convinced that the people in Kiev know what to do, and that they will find the best solutions in order to normalize the situation and put it back on a legitimate and peaceful track.

Of course we become saddened and outraged when external interference with the processes going on in Kiev becomes obvious. Any solutions taken in Ukraine are sovereign, and that country's government takes them in the framework of democratic processes. For us, intervening or influencing [the situation] with the use of any measures of political management would be unacceptable.

On the Sochi Olympics

Some countries behave in a totally impudent and unceremonious way by attempting to discredit the Sochi Olympics politically. They throw plenty of dirt every day, and unfortunately, our media quote them.

The strong, the successful, the rich, and the healthy are not always loved. But the Olympic Games, the sports, are sacred, they have no relation to politics. The Olympic host country always wins if it invests its soul. In our case, I may say that we have already won. For the first time in decades a whole new city has been built in our country.

This is why our country has already won. All talk of this having been achieved with enormous sums of money, of it having not been worth the money spent, stems from poor understanding of the grandiosity of what has already been done.

It will receive – has already received – a unique infrastructure, which will nevertheless work for the benefit of the entire country by providing opportunities for amateurs, for professional athletes, and for the promotion of sports among children and youth, because we already have plans for the future in place.

Putin is a completely established person, a man of integrity. He keeps growing more sophisticated as an administrator; he is so much in the loop in terms of expert knowledge, down to the minute detail, that his subordinates have a very hard time working with him if they are not prepared to discuss certain issues on a comparable level of expertise.

You know, I keep kicking myself for skipping university history classes, for example. Putin is a keen appreciator of history. When he starts delving on certain historical episodes I sometimes blush at my ignorance.

He once asked me about some dates related to the history of the Old Believers in Russia. I suddenly realized I could not give him a coherent reply.

Dmitry Peskov was born to the family of a career diplomat in Moscow on October 17, 1967. After graduating from Moscow State University's Institute of Asian and African Studies in 1989, with a degree in oriental history, he went on to work in the Foreign Ministry and at the Soviet embassy in Turkey.

In 2000, following Vladimir Putin's appointment as acting president and his subsequent election to that post, Peskov was appointed as head of the media relations department at the presidential administration's press service.

What makes Putin so popular among Russians?

Peskov supervises the Kremlin's public relations directorate, which coordinates the information activity of government ministries and departments in Russia and abroad. The directorate is also tasked with improving Russia's attractiveness for investments. Peskov speaks Turkish, Arabic, and English.