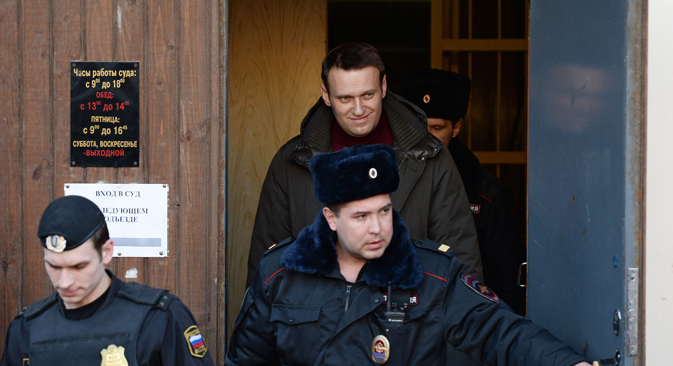 Opposition leader Alexei Navalny is sentenced to 7 days of administrative arrest for disobeying police during an unsanctioned gathering in support for the defendants in the Bolotnaya case. Source: Ria Novosti / Maxim Blinov

Although nearly all those convicted of participating in the Bolotnaya protest of May 2012 will spend some time behind bars, the sentences of two to three years were less severe than anticipated.

On Monday Feb. 24, a court handed down sentences in the case of the mass protest in Moscow's Bolotnaya square on May 6, 2012. All eight defendants on trial were found guilty. One of them, a woman, was given a suspended sentence, while the other seven defendants received prison terms of three to four years. The prosecution had asked for between five and six years.

Earlier, 11 defendants in the same case were pardoned under an amnesty announced in December 2013 to mark the 20th anniversary of the Russian Constitution.

Russian political analysts and human rights experts have called the sentences lenient and do not think there will be more rallies in support of the Bolotnaya defendants.

Konstantin Kostin, chairman of the board of the Foundation for the Development of Civil Society:

I think the sentences were quite humane. Incidentally, this opinion is shared by the defendants' lawyers. It is absolutely obvious that violations of the law were committed at the May 6 rally and, clearly, the guilt of those who attacked policemen has one way or another been proven and recorded. There are numerous CCTV cameras in Moscow and there are many pictures and a lot of footage from the rally.

Dmitry Abzalov, vice president of the Center for Strategic Communications:

The sentences turned out to be quite moderate: you may recall that at first the defendants faced from five to six years in prison. The court did not assume a tough position, although the sentences are not light either, apart from one suspended sentence. This is a moderate ruling: the violation of the law has been recorded, but no tough scenarios have been put into action. This indicates that there was no fundamental pressure from the authorities to hand down tough sentences.

Court rulings always have a socio-political impact. It is another thing that there was no strong political pressure here (say, to send them behind bars for 10 years). Even if there was any political pressure in this case, it was not strong. Otherwise, the sentences would have been different.

Had the overall model been one of acquittal, it is not clear what the point of the trial would have been then. These charges do not envisage suspended sentences. The court adopted a moderate position in line with the general liberalization of the law.

The authorities had no need for a tough option. The political season is over, public sentiments have changed so there was no need to make a lot of that trial and create hype around it. Some observers suggested that the decision to postpone the session at which the sentences were announced had to do with the fact that the sentences would be harsh and it would be better to announce them after the Olympics closing ceremony, but they have been proven wrong.

One should not expect the verdict and the sentences to create a lot of stir in society. There are likely to be some rallies but without a big turnout. The fact that the sentences were announced on a Monday, which a working day, and that the weather was not very conducive to spending a long time outdoors all have a role to play. Rallies were at their most numerous last year, whereas now the turnout is gradually decreasing.

Alexander Shatilov, head of the sociology and political sciences department at the Financial University of the Russian Government:

The confrontation surrounding the Bolotnaya trial has ended in a draw. The authorities have demonstrated that they are determined to fight the radicals, while the defendants and their supporters have shown that they will not budge on their ideological differences with the authorities. Still, the opposition has failed to turn the Bolotnaya defendants into "martyrs" in the eyes of the general public and in this, I think, the ruling regime has achieved a serious success for itself.

Whether the verdict is just from the point of view of the law is for a court to decide. As for how adequate it is from the point of the existing political reality, I think it is quite adequate. On the one hand, the defendants were given quite lenient sentences. On the other, the authorities have not given in to the liberal public, who demanded that all the defendants be amnestied.

As regards street rallies, at the moment the opposition movement in Russia is on the wane. Indeed, there are "professional dissenters" but they are not numerous. Overall, given quite a tolerable socio-economic situation in the country and the triumph at the Sochi Olympics, the positions of Vladimir Putin and his "team" have considerably strengthened compared with 2011-2012. Yet, a trend for the authorities' "moral depreciation" continues.