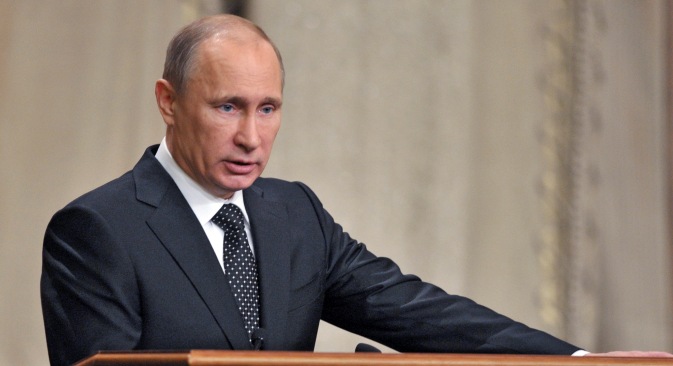 The Federation Council's decision to authorize the use of Russian troops in Crimea does not mean that military intervention will occur in the near future, news agency Inerfax reported on Mar. 1, citing a Russian Foreign Ministry Statement.

Deputy Foreign Minister Grigory Karasin said: “Today’s unanimous decision to grant Russian President Vladimir Putin’s request for the use of Russian armed forces until the socio-political situation in Ukraine normalizes means only that the president now has a free hand in the event that the situation deteriorates.”

During a discussion that preceded the voting in the Federation Council, deputy speaker Yury Vorobyev said that US President Barack Obama’s statement that Moscow “would pay dearly for its policy” in relation to Ukraine “had crossed the red line and insulted the Russian people.”

Senators instructed the Federation Council’s international committee to prepare an appeal for recalling the Russian ambassador from the United States.

Earlier on Saturday, the lower house of Russian parliament (the State Duma) adopted an appeal to Russian President Vladimir Putin urging him to take measures to stabilize the situation in Crimea and use all available capabilities to protect the population of Crimea from lawlessness and violence.

According to the head of the State Duma committee on CIS affairs, Eurasian integration and relations with compatriots, Leonid Slutsky, Russia may deploy a limited contingent of its troops in Crimea to ensure the safety of Black Sea Fleet bases and the Russian population in the region, as well as to counter possible acts of provocation on behalf of the “unconstitutional regime in Kiev.”

Earlier Crimean Prime Minister Serhy Aksyonov appealed to President Putin “to assist in ensuring peace and tranquillity on the territory of the Autonomous Republic of Crimea.”

In an interview with RIR, chairman of the board of the Foreign and Defense Policy Council Fyodor Lukyanov said that the decision of the upper house of Russian parliament was necessary in order to legalize the current status quo.

“Russian military units appeared in Crimea from yesterday and the day before yesterday. They are there in order to guarantee that Kiev does not interfere with preparations for the referendum [on Crimean autonomy]. Russia considers the authorities in Kiev to be illegitimate and proceeds from the premise that they have no right to dictate anything to it or to the population of Crimea,” he said.

Lukyanov stressed that the Federation Council’s decision is a reply to Obama’s warning. “Since during the discussion, the parliamentarians mentioned Obama’s warning, it means that the conflict automatically moves to the international level,” Lukyanov said.

He went on to add that Russia would now face a strong condemnation from the international community and accusations of pursuing an aggressive policy and that its image would suffer.