Putin sees no needs for military action in Ukraine 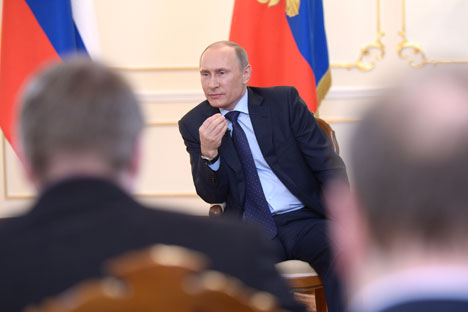 Putin: "We do not intend to intervene, but we think that all of Ukraine’s citizens must be offered equal rights to participate in the life of the country and to define this country’s future". Source: Alexey Nikolsky / RIA Novosti

At a special press conference, the Russian president breaks his silence for the first time since the crisis began.

Vladimir Putin gave a press conference, during which he offered the Russian perspective on the situation in neighbouring Ukraine and urged politicians in Kiev to take steps to restrain radical forces and restore national unity.

On the situation in Ukraine

“There can be only one assessment: an armed seizure of power. No one is disputing this. The question for me is, why was this done?

Why was it necessary to plunge the country into the chaos that it is in now? There is no answer. They wanted to show their strength—in my opinion, this was an unwise move. Southern and southeastern Ukraine have been stirred up by these actions.

I have said to them [the new Ukrainian authorities] a thousand times, ‘Why are you dividing the country?’ ‘What are you doing?’ Essentially, a new constitution must be adopted and put up for a referendum so that all of Ukraine’s citizens feel that they are playing a role in the establishment of new principles. But this is not our affair.”

On potential foreign influence on the situation in Kiev

“All of this was very well arranged [the seizure of power in Ukraine]. The Western advisers made an effort. But if the government had been strong, no nationalists would have been able to carry out such pogroms, the results of which we are seeing now. I sometimes think there are people somewhere in America making fools of themselves and acting as if they’re experimenting on rats, without understanding the consequences of what they’re doing.”

On the potential mobilization of troops in Ukraine

“The use of the military is an extreme scenario. But we have received a direct appeal from the legitimate Ukrainian president, Yanukovich, for military assistance to defend Ukraine’s citizens. We are seeing carousing by neo-Nazis, nationalists and anti-Semites in some parts of Ukraine, including Kiev. Sending in forces is an extreme measure.

We are not going to battle with the Ukrainian people. If we make the decision to send in troops, it will be only in order to protect the citizens. We do not aspire to subjugate anyone or to dictate to anyone, but of course, we will not be able to stand on the sidelines if we see that they [the Russian-speaking population] are being victimized, killed or subjected to malicious insults.”

On the situation in Crimea

“There has been neither a single military clash nor a single shot. All we did was reinforce the security of our facilities. We do not intend to intervene, but we think that all of Ukraine’s citizens must be offered equal rights to participate in the life of the country and to define this country’s future.

These were local self-defense forces [i.e., the soldiers in Crimea]. We did not take part in their preparation.

The issue of Russia’s annexation of Crimea is not under consideration. Crimea’s residents have the right to exercise their free will to determine their own fate. No one has taken away a nation’s right to self-determination. Under no circumstances will we provoke anyone, nor will we stoke such sentiments.”

“He has no political future. Humanitarian considerations caused us to make the exception to intervene. I think he would have been killed there.”

“Gazprom is not returning to former prices; it does not want to extend the current discounts, which had been negotiated on a quarterly basis.”

On financial aid to Ukraine

“In theory, we would be willing to consider measures to provide other tranches, but our Western partners are asking us not to do this. They are making requests regarding cooperation within the framework of the IMF in order to stimulate the Ukrainian government to carry out reforms to rehabilitate the economy. The government is currently examining different options.

Three days ago, I issued an order to the government to renew contact on a governmental level with our colleagues in the corresponding Ukrainian ministries and government departments so as to maintain economic ties and to support them in their efforts to rejuvenate the economy.”

On the international reaction

“We are being accused of acting illegitimately, but we should recall the United States’ actions in Iraq and Libya, where they acted either without any sanctions or having distorted them.

Our actions completely respect the standards of international law, as we have an appeal from a legitimate president, and they coincide with our interests, as we are helping people who are closely connected to us in terms of culture and history.”

On possible sanctions against Russia

“Those who plan to implement these sanctions must think about their consequences. The sanctions will create mutual damage, and that must be considered. Our partners have supported the armed seizure of power, and they have proclaimed these people to be legitimate. We consider all threats against us to be counterproductive and harmful.”

On the potential boycott of the Paralympic Games in Sochi

“If anyone tries to disrupt the Paralympic games, this means only that there is nothing sacred for the people who are trying to do so. The Paralympic Games are not in jeopardy.”

Based on a report by RIA Novosti.