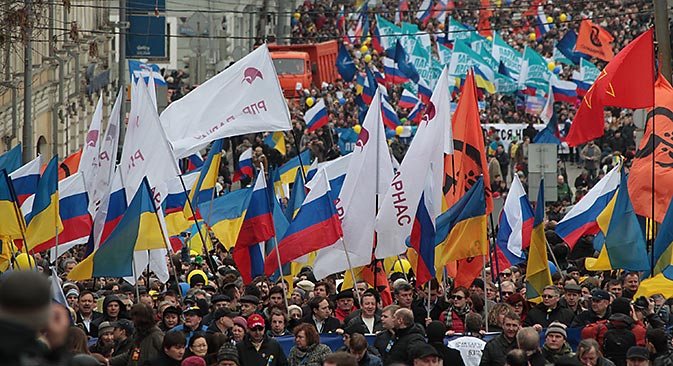 According to the organizers, tens of thousands of protesters gathered on Saturday’s protest at central Moscow against the war in Ukraine. Source: Oleg Prasolov / RG

The meeting in central Moscow brought together a diverse group of people with a variety of views on the situation in Crimea and the state of the Russian press.

Saturday’s protest in central Moscow against the war in Ukraine, started at Pushkinskaya square and moved to Sakharov’s prospect, brought together a wide range of Russians eager to protest not only Russia’s involvement in Crimea, but the state of Russian politics and the Kremlin’s recent move to tighten the reins on mass media.

Although protestors of all political beliefs attended the march, including one young communist group chanting “there is no warfare but class warfare,” representatives from all sections of Moscow society were present. Hipsters with curled mustaches, grandmothers holding small Ukrainian flags, and families strolling with their children, gave the event a festive air, despite the many police present.

Crimea goes to the polls

Olga Petropalevskaya started going to protests in 2012, when Russians came out in force to protest Putin’s election. “It’s not honest – they’re not letting in observers,” she said about the Crimean elections that will decide whether the peninsula will become part of Russia. Petropavlevskaya, who has fond memories of visiting Ukraine as a child, added: “they should live their lives, and we should live ours.”

Alexei Bondarenko came to protest not only against the war, but “against the powers that be, to show our numbers.” He said, “I feel bad about what’s happening” in Ukraine, but for him, the greater issue is the number of Russians who believe in the propaganda of state-owned media. Bondarenko, who works at a technology firm, said his co-workers see the Crimea “as theirs.”

Dina Skvortsovo, a fourth-year student in the journalism faculty of Moscow State University, held a sign protesting the repression of independent media in Russia. Still, she said that Western news organizations have not accurately presented Russia’s position on Ukraine. “It’s an information war,” she said. Still, like Bondarenko, she finds herself fighting to present a more nuanced side of the issue to friends. Her grandmother, whose only source of information is government TV, is a supporter of the Kremlin’s recent clampdown on independent media.

One large group carried gruesome placards depicting Russia’s war in Chechnya. The war in Chechnya, in which thousands of Russian soldiers died, is a grim memory for many Russians here.

Others argued their cause through satire. Teatr Partisan, a site-specific protest theater group, sent two young men wearing masks made out of salo, a lard snack frequently eaten when drinking vodka and often associated with Ukraine. Holding placards saying “make salo, not war” the two men, who declined to give their names, explained that “we want to call attention tothe absurdity of the situation.”

Yet another activist, Phillip Talanovheld high a flag with Facebook’s logo on it. “It’s the last platform for distributing independent mass media,” Talanov said. He explained that all his politically active friends use the social network to spread their ideas without government intervention.