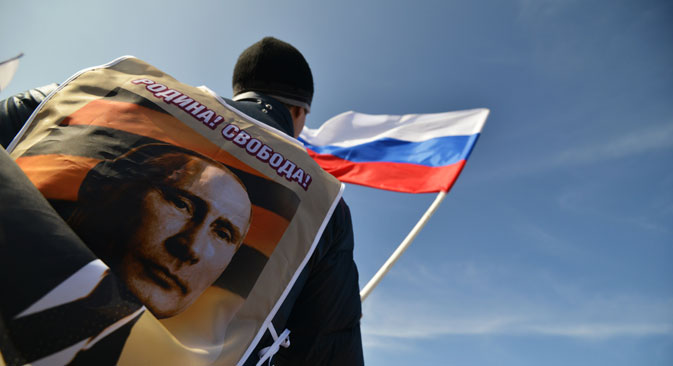 Participants in the rally to support Crimea residents in Stavropol, on March 7. Danil Semenov / RIA Novosti

Support for the Russian president increased by 5 percent in the week before the Crimea referendum, but experts say the rise is temporary.

President Vladimir Putin’s popularity among Russians increased 5 percent ahead of the referendum in Crimea, according to sociologists from the Public Opinion Foundation (FOM). However, experts believe this increase is temporary and will sink as disagreements with the West continue over the fate of Ukraine.

Opinion: A game of Ukrainian roulette

Political scientist Dmitry Abzalov ties the increase in ratings to two factors: the Sochi Winter Olympics and Paralympics and the referendum in Crimea. According to Abzalov, Putin’s ratings are tied to changes in foreign policy because Russian domestic politics are calm at the moment.

“If the internal situation is stable and there are no serious fluctuations, then the main factor [affecting the ratings] will be foreign policy,” Abzalov said. “In the Russian Federation, the president is associated with foreign policy; it is considered his personal responsibility. Defeats, failures or successes in foreign policy influence the ratings.” Abzalov has predicted that Putin’s ratings will hold strong through May, although subsequently the ratings may drop.

According to Leonid Polyakov, a political scientist close to the Kremlin, Putin is currently “performing the role of a consolidating factor in a situation of obvious foreign policy crisis.”

“His position on Ukraine is tough and quite understandable to most Russians. The picture that we saw at Maidan over the last few weeks evokes negative emotions among the majority. No one wants to find out who stands there with what goals.

“Putin’s position, that the power in Kiev is illegitimate, calls forth an analogous reaction in the majority [of Russians]. Putin’s decision on Crimea is an important factor. The situation there is critical, and there was a moment when it was not completely clear how Russia would respond to the Crimeans’ call for unification. Putin’s decisiveness and the request to the Federation Council concerning the use of troops in extreme situations demonstrated his willingness to follow through. This has greatly influenced Putin’s ratings,” Polyakov said.

Like Abzalov, Polyakov thinks that Putin’s ratings will fall, possibly to their 2012 levels or even lower as difficult decisions are made about Crimea.

Lev Gudkov, director of the analytical Levada Center, said that in his opinion, overall confidence in the authorities is falling and the pro-Putin electorate is gradually eroding. “The Ukrainian revolution has alarmed Russians greatly,” Gudkov said.

“This nervousness awakened all the dormant mass phobias and imperialist complexes. The absolute majority blames the West for provoking tensions in Ukraine. They are simultaneously aware of what is behind those movements: outrage over a corrupt government and the attempts of Yanukovich’s authoritarian regime to maneuver between Russia and the EU against the backdrop of perpetually difficult conditions in the country.”

Gudkov thinks that the perception of post-Soviet governments as corrupt is beginning to extend even to Putin. “People fear instability and aggressive rhetoric, and the denunciation of extremists will certainly trigger fears,” Gudkov said. “But it will become understood later on that people protesting against the corrupt regime were came out alongside the extremists.”

However, Gudkov thinks that the electorate will remain stable for as long as the standard of living holds.

“Putin’s maximum support comes from large and medium-sized cities, especially those where what is left of Soviet industry has been preserved, as this forces people to rely on state support. It decreases in small cities and Putin’s support is even lower in the villages. Taken together, the small cities and villages make up a conservative body [of voters] where strong tensions and discontent abound, which is tied to the failure of the state to fulfill its obligations to society. But Putin’s support is lowest of all in Moscow,” Gudkov said.

“Putin’s electorate is eroding in the regions, but the bulk, at the center, is still holding firm. I think that support for the president will decrease and dissatisfaction will grow. According to our research, right now, 47 to 55 percent of Russians say that they do not want to see Putin in the next presidential elections.”

Based on materials from Gazeta.ru