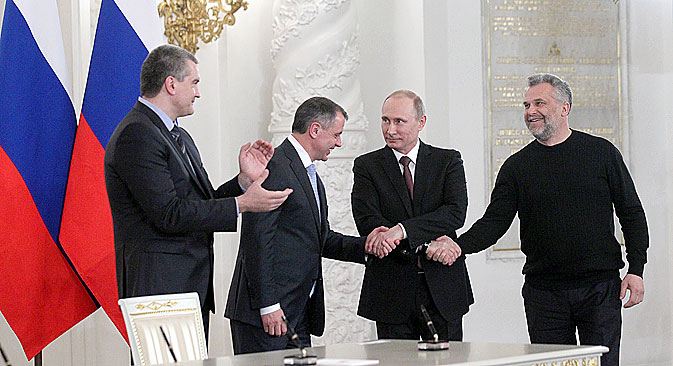 Russian President Vladimir Putin has signed a historic document that formally accepts Crimea and the city of Sevastopol as new subjects of the Russian Federation.

On Tuesday, March 18, at an extraordinary session of parliament, Russian President Vladimir Putin signed an intergovernmental agreement giving Crimea and the city of Sevastopol the status of full-fledged members of the Russian Federation. According to experts, the annexation could be completed by the end of the year.

Before signing the agreement, Putin addressed both chambers of parliament. He noted that Russia and Crimea have a common history and that Crimeans are tired of "forced assimilation" from the authorities in Kiev.

“They have changed presidents, prime ministers, members of parliament, but they haven't changed their attitude toward their country and its people. They have milked Ukraine, fought among themselves for authority, assets and money," said Putin.

Putin stressed that Ukraine still has no legitimate authority, and many state agencies are under the control of radical nationalists. "There is still no legitimate executive power in Ukraine. There is no one to talk with," said Putin.

Regarding allegations of alleged aggression or annexation, the president said that Russia hadnot sent troops into Crimea, but only strengthened its existing forces without exceeding the limit set underinternational agreements.

At the same time, Putin made it clear that Russia intends to take into account the rights of all peoples living in Crimea and respect their national identity. "It would be proper if Crimea has three equal languages - Russian, Ukrainian and Crimean Tatar," he stressed.

The intergovernmental agreement between Russia and the Republic of Crimea, which allows Crimea and the city of Sevastopol to enter the Russian Federation, was signed by Vladimir Putin, Chairman of the State Council of the Republic of Crimea Vladimir Konstantinov, Chairman of the Council of Ministers of Crimea Sergei Aksyonov, and the mayor of Sevastopol Alexei Chaly.

On March 19, the deputies are scheduled to meet with a delegation from Crimea. On the evening of March 18, the Speaker of the Federation Council Valentina Matviyenko and members of the upper chamber met with the Crimean delegation. It is possible that the law will be passed as soonasMarch 21.

Under the agreement, there will be a transitional period until January 1, 2015 during which issues linked to theintegration of the new entities into the economic, financial, credit and legal system of the Russian Federation will be resolved.

The laws of the Russia Federation will come intoeffect on Crimean territory from the day Crimea is annexed by the Russian Federation.

The laws of the Republic of Crimea and the city of Sevastopol will remainin effect until the end of the transitional period or until the necessary laws are adopted by the Russian Federation.

As Professor of the Constitutional and Municipal Law Department of Moscow State University and member of the Civic Chamber Yelena Lukyanova explained, it is not clear when the text of the agreement will be discussed.

"After Crimea appealed to the Russian parliament, they had to attend consultations with the deputies regarding the annexation agreement. Whether they could introduce and ratify the agreement so quickly is not yet clear," she explained.

"So far everything is being done in strict accordance with general constitutional law on the procedure for annexing a new entity into the Russian Federation. The existing procedure has been fully complied with."

Lukyanova further elaborated that since the procedure is being used for the first time in relation to another state, its nuances are still unknown.

"In general, I can understandwhy the country's leadership made such quick decisions. It can be explained by the fact that the Treaty of Küçük Kaynarca of 1774 was taken into consideration. According to it [the treaty], if Crimea leaves the Russian state, then Turkey could claim it," said the lawyer.

She also noted that if Russian domestic legislation is to be fully complied with, there are still many unresolved issues concerninginternational law.

Leonid Polyakov, head of the Department of General Political Science of the Higher School of Economics, said that after the signing of this agreement, a number of amendments will have to be made to Russian legislation.

"For example, it will be necessary to increase the number of deputies and senators in the Russian legislature by the number who will represent Crimea and Sevastopol," he said. "I think that all procedures will be completed before the end of this year."