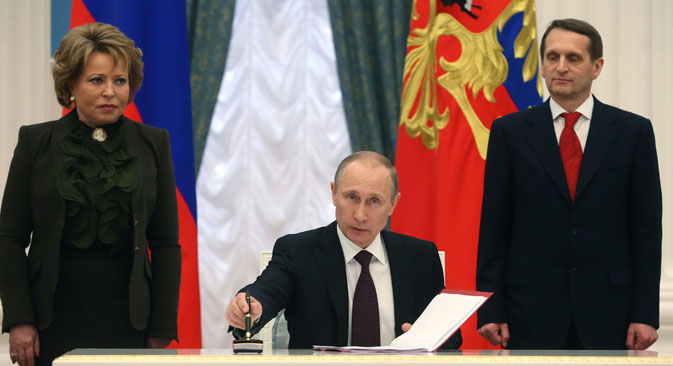 According to Putin, Russia is tired of the fact that the West does not treat it as an equal partner. Source: AP

President Vladimir Putin’s address to both houses of Russia’s parliament last week signaled that Russia has had enough of what it perceives as Western double standards. The speech, alongside events in Crimea, herald the birth of a tougher approach to foreign policy.

In his hour-long speech, which Western media are comparing to the fiery address Putin gave in Munich in 2007, the Russian president outlined the principles of Russia's new foreign policy and summed up his view of the 25-year period after the Cold War. One thing is clear – the speech signals a watershed in post-Soviet Russian foreign policy.

According to Putin, Russia is tired of the fact that the West does not treat it as an equal partner. "We have been repeatedly cheated, decisions have been made behind our backs and have been put before us as fait accompli," said Putin.

"So it was with the expansion of NATO to the east ... and the deployment of missile defense systems ... with endless delays in visa negotiations, with promises of fair competition and free access to global markets."

He stressed that Moscow wants mutual "relationships to be equal, open, and honest." He added that Russia has an independent position in the world and intends to defend it any way possible.

In his speech, Putin basically made it clear that from now on, Russia will act just like the United States does. "Why are Albanians permitted to do something in Kosovo ... that Russians, Ukrainians and Crimean Tatars are prevented from doing in Crimea?"

Our people - our interests

Protecting the rights of compatriots abroad was another important component of Putin's speech. The Kremlin has now proclaimed itself the protector of those Russians that found themselves scattered in different countries after the collapse of the USSR.

"Millions of Russians went to bed in one country and woke up abroad ... the Russian people have become one of the biggest, if not the biggest divided nation in the world," said Putin.

Up to now, Moscow has preferred to act through supranational integrational institutions (in particular, the EEC), but now, after what Russia sees as an attempt by the West to win Ukraine back through a coup, Moscow is declaring its readiness to protect its interests and security in more radical ways.

"Vladimir Putin has announced that existing borders in the former Soviet Union could be reexamined if a threat emerges to what the Russian president himself calls the 'Russian world'," says Russian political analyst Sergei Markedonov.

Will the Ukrainian conflict turn hot?

These types of statements have intensified the fears of Western partners and the apprehension of some CIS countries (in particular, Kazakhstan, whose north is inhabited by Russians). However, experts believe that these fears are premature.

"Russia will not spark conflicts along its borders," said Markedonov. "The situation in Crimea has just shown that if there are threats, there will be a reaction. And if Moscow was ready to consider the anxieties and concerns of the West before the Crimean situation, now it is putting its own interests first."

Putin's speech sent shockwaves across Europe and the U.S. "The West is looking at the change in Russian foreign policy with growing apprehension. There is more and more talk here about a return to confrontation or even a new Cold War with Russia," explains Vice President for Studies at the Carnegie Endowment Andrew Weiss.

"Moscow will no longer able to work as it did before with Western partners. After Moscow's annexation of Crimea, the West is going to rethink its relations with Russia. It's still too early to say what it will be like. We are only at the beginning of the process."

However, in his speech, Putin made it clear that this new foreign policy paradigm doesn't need to be confrontational. He's not going to transform Russia into a center of anti-Americanism or a destabilizing force in the world.

"The most important point Putin made in his speech was to summarize the period after the collapse of the USSR," explained Fyodor Lukyanov, chief editor of Russia in Global Affairs magazine.

"This doesn't mean, of course, restoring the Soviet Union, but instead refusing to see the incident as the absolute end of the process. Moscow now considers it to be a work in progress and intends to adjust its intermediate results, not necessarily in the sense of redrawing boundaries. Crimea is most likely a unique case rather than the model. The main thing is to morally and politically reassess the situation."

Besides, the Kremlin understands that none of the sides stands to win if Russian-American or Russian-European relations seriously deteriorate. Putin therefore made some conciliatory remarks in his speech. The Russian president tried to convey to the West that Ukraine is not the only fish in the sea, and that there are other problems in the world that Russia and the West need to work on together.

Read more: Why a militarily powerful Russia is good for the world

"U.S. efforts to prevent reintegration on post-Soviet territory are artificial and inertial. And if we can reach an understanding that Moscow's consolidation of these lands will not create a power axis of anti-American sentiments, the new Yalta-2 (the new rules for engagement in Europe, including defining the boundary where the Western order ends and ours begins) will be the key to cooperating on transnational issues such as Afghanistan, East Asia and the Middle East," says Dmitry Suslov.

However, the U.S. is not yet ready to accept Russia's new foreign policy course. "We should not expect the West to recognize Ukraine as part of Russia's sphere of influence. This would be a step backward in terms of the past 20 years in which Ukraine has been integrated into the transatlantic space," says Andrew Weiss.

However, this position is not constructive and is fraught with new challenges. "The West, of course, can continue to refuse to negotiate, but this would further destabilize the situation in Europe. We must put an end to the uncertainty and unspoken issues that have persisted since the Cold War," says Dmitry Suslov.