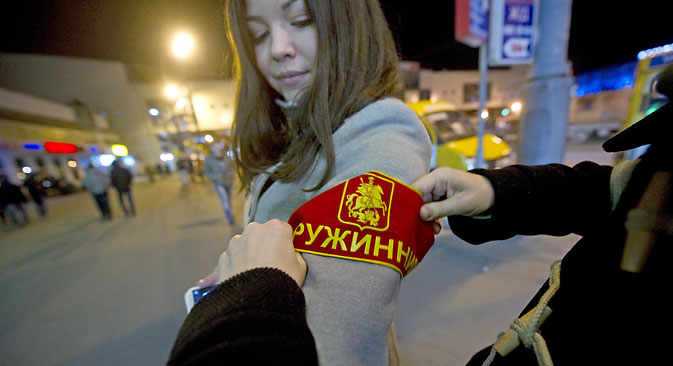 In Moscow today, there are already about 20,000 members of the People’s Guard. Source: Kirill Kalinnikov / RIA Novosti

Most Russians believe a people’s guard (the Voluntary People's Druzhina) is necessary in order to keep the streets of cities safe. A bill on the revival of this Soviet-era organization was recently passed by parliament and signed into law by Russian President Vladimir Putin.

According to a recent opinion poll conducted by the Public Opinion Foundation, most Russians believe a voluntary people’s guard is necessary in order to keep the streets of cities safe.

A bill on the revival of the Soviet-era Voluntary People's Druzhina (an organization that existed from 1955 to 1991) was recently passed by parliament and signed into law by Russian President Vladimir Putin.

However, although citizens are in favor of these people’s guards supplementing police patrols to maintain peace in the city, they would not want these guards personally using force against them.

In early April, Russian President Vladimir Putin signed a law that, on the federal level, establishes a legal basis for the participation of citizens in the protection of public order and the search for missing people. The law has enshrined the legal status of the People’s Guard.

According to the survey conducted by the Public Opinion Foundation, Russians are not yet aware that this new law will come into force in July, after which citizens can be fined from 500 to 2,500 rubles ($14-70) for disobeying or obstructing the work of the People’s Guard.

Nevertheless, 64 percent of those questioned in the survey believe that people’s guards are needed in Russian cities. People’s guards are already playing an active part in providing security at public events – they ensured the safety of citizens during the recent Easter celebrations, and police plan to have them assist in the upcoming celebrations and parades during the May holidays.

As for their duties, the people’s guard, according to half of the respondents, should patrol the streets and maintain public order, as well as monitor the safety of the subway and public transport systems. In total, 55 percent of Russians do not mind if, in the presence of a police officer, the People’s Guard check personal identity documents, but say guards should not have the right to inspect personal belongings.

Rights of the People’s Guard

The law states that the People’s Guard will be able to inspect documents, participate in the inspection of personal belongings and even cars, detain offenders, and prevent crimes. In general, they will do the work of patrol officers.

However, there is a very important caveat: All this can be done only in the presence of a police officer and on his instructions. These orders can be very different – from assistance in traffic regulation and the enforcement of law and order, to searching for missing people, or even criminals.

During a one-year period, the volunteer must work no less than 36 patrol shifts. Of course, the law expressly prohibits the use of people’s guards in activities or operations that entail any risk to life or health.

It is also prohibited to acquaint them with secret documents or provide them with evidence containing information about secret investigations or state secrets. However, so far, no special benefits have been provided for volunteers in the people’s guards.

The favorable attitude to the People’s Guard, according to Gregory Kertman, an analyst at the Public Opinion Foundation, is due to the fact that Russians “do not feel one hundred percent safe” and do not have “total confidence” in the police.

Therefore, the People’s Guard, according to him, is perceived as an additional institution of public order and an “attribute of Soviet life, for which many citizens have nostalgic feelings.”

“Since Soviet times a positive attitude towards people’s guards has developed,” says Vyacheslav Smirnov, director of the Institute of Socio-Political Research.

However, the expert recalls that in Soviet times, these squads were used “as an instrument of pressure on members of the non-conformist youth culture.” And now, according to Smirnov’s observations, behavior similar to that of Soviet people’s guards is being manifested by the Cossack patrols at railway stations in some southern regions of the country:

In Moscow today, there are already about 20,000 members of the People’s Guard. Who are these volunteers that guard the rule of law?

“All sorts of people come to us,” says Igor Abramov, head of a People’s Guard squad in a district of Moscow. “For some this is a hobby, a desire to experience the romanticism of policing, while for others – it is pure civic-mindedness. However, we do not accept everyone. We refuse to admit those with criminal records and those with aggressive personalities.” 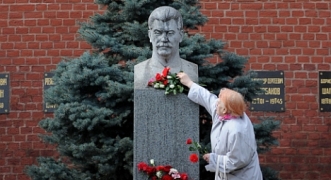 In addition, there are student law-enforcement groups that have recently emerged in universities in many regions of Russia. This is due to the fact that young people are quite concerned about the question of crime, especially offenses motivated by racial hatred. In universities, they have decided to carry out night patrols at student dormitories and nearby areas, in order to prevent such incidents.

According to experts, most people who aspire to become members of the People’s Guard are those who themselves, directly or indirectly, have been victims of criminal elements at some time in the past.

An increase in the level of ethnic crime has also been observed in Russian cities. Two local police officers in each neighborhood are no longer able to ensure its safety. As a result, some civic-minded proactive people proposed the organizing of people’s guards - and the idea started gaining popularity.

Based on materials from Komsomolskaya pravda, Rossiyakaya Gazeta and Kommersant.