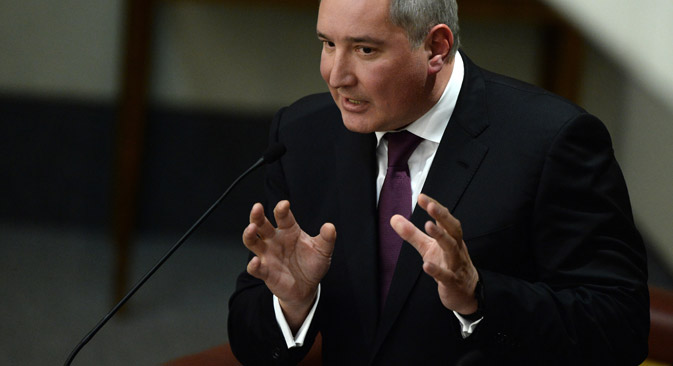 Dmitry Rogozin belives the suspension of GPS stations' work in Russian territory will not impact the quality of the signal received by Russian users. Source: ITAR-TASS

The stations will be shut down completely if negotiations on the placement of Russian GLONASS stations in America are not completed by May 31, 2014.

On June 1, Russia will suspend the operation of 19 U.S. GPS signal transmission stations, according to Deputy Prime Minister Dmitry Rogozin.

As reported by ITAR-TASS, in mid-April Rogozin, commenting on the U.S. decision to freeze the construction of GLONASS signal calibration stations on its territory, stated that the American actions were politically motivated.

“Since in the last few months there was no progress in the negotiations in the deployment of the GLONASS system in the U.S., we can stop the operation of GPS stations on the territory of the Russian Federation from June 1. Time to resolve this issue remains until May 31,” said Rogozin.

The Deputy Prime Minister said that a meeting with the Americans has resulted in the formation of a working group, which consists of representatives of Russia’s space agency, Roskosmos, and the Academy of Sciences and the Ministry of Foreign Affairs.

“We are embarking on negotiations and we hope that before the end of this summer we will find a solution that will allow for the restoration of cooperation between GPS and GLONASS on conditions of parity and proportionality,” he said, stressing that otherwise “cooperation will be minimized, and on September 1, the operation of these stations will be stopped completely.”

In a post on his Twitter account, however, Rogozin assured that the suspension of GPS stations in Russia will not affect the quality of the signal received by users.

An additional justification for the ban on the use of GPS was the rejections and system failures which have occurred recently in Ukrainian airspace. The Russian Federal Air Transport Agency (Rosaviatsiya) sent a recommendation to airlines that when flying over neighboring countries they are not to use navigation that is based on GPS technology, after it became clear that onboard GPS navigation of civil aircraft in the sky over Ukraine had been rejected.

According to the ICAO, the loss of GPS and GPWS signals (which warn pilots that planes are dangerously close to the ground or gaining dangerously high) increases the pilot’s workload, forcing him to check with other air navigation systems, as well as increasing the psychological burden on the crew.

Rogozin declared that Russia may halt shipments of NK-33 and RD-180 missile engines, which are an important component in the American space program, if they are used for military purposes.

The contract between United Launch Alliance and the Russian-American company RD-Amros, presupposed the delivery to the U.S. over the course of several years of 36 RD-180 rocket engines for Atlas 5 missile carriers, which have been used to launch commercial satellites and U.S. Air Force satellites since 2002.